Movie Review: ‘Il Buco’ is Near Wordless, But Atmospheric and Alluring 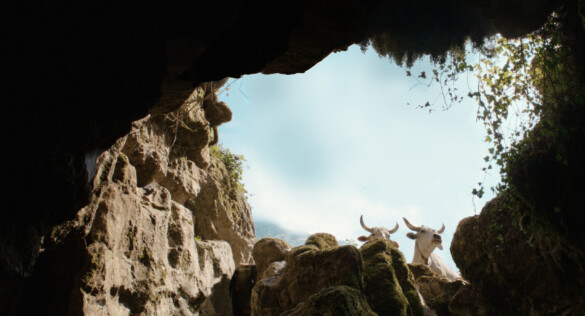 Synopsis: The extraordinary adventure of the young members of the Piedmont Speleological Group who, having already explored all the caves of Northern Italy, changed course in August 1961 and went South to explore other caves unknown to man.

In 2010, Italian filmmaker Michelangelo Frammartino delivered the short and gentle indie hit Le Quattro Volte (interpreted as The Four Times in English). The film depicted the concept of metempsychosis, or the transmigration of souls, in a mountain town in Caulonia, Italy. Frammartino’s technique is meditative and a tad odd as it explores the beautiful natural world through lengthy lingering shots of the plains, animals, and the village’s community. The reason why it’s strange is not that it has little to no dialogue; it is because of its mystery about the journey that he takes us on about rebirth and the ideas of unity by humans, animals, vegetables, and minerals. There is a possibility many will see the film and think that its concepts are somewhat or entirely outlandish. Personally, I don’t think it is silly, albeit it took me a couple of watches to start getting into it and appreciate its reflections on life.

He takes an approach to filmmaking similar to Apichatpong Weerasethakul’s (who also had a film about resurrection that same year called Uncle Boonmee Who Can Recall His Past Lives). Nonetheless, Frammartino delivers his third feature eleven years after his critically acclaimed experimental drama, with Il Buco. Set in August 1961, Frammartino’s latest recreates the real-life exploration and study of one of the deepest caves in the Calabrian hinterland, the Bifurto Abyss (almost seven hundred meters below the surface). During this time, Europe was undergoing an economic boom; on one side of Italy, the highest building at the time was being constructed. Meanwhile, on the other side of the country, some adventurers dedicated their time exploring this cavernous chasm to see where it led them. Even though it is dedicated to the real people who got down into the tunnels, Frammartino is highly interested in venturing on his own into the atmospheric abyss (with some limitations because it doesn’t go into the cave’s depths).

There isn’t much of a narrative in Il Buco, always staying on the thin line between narrative feature and documentary. My gut says it is neither; the best way to describe it is a cinematic spiritual experience. It demands patience since watching can be somewhat frustrating; the only way to ideally experience the movie correctly is in the theater because there are no distractions. The viewer becomes immersed as the film continues through its transient ninety-three-minute runtime and absorbs the ravishing images. Like Le Quattro Volte, there is almost no spoken dialogue. It transgresses with slow pacing–taking its time, sauntering as it goes deeper into the cave, or displaying the beauty of the Italian scenery. It’s truly a marvel to look at, thanks to cinematographer Renato Berta (Au Revoir les Enfants and Lover for a Day), who’s an expert in showing delicacy through subtlety and using natural light (and darkness) to help encapsulate the beauty within each frame.

Time moves at a different pace when watching these types of movies. It reminded me of the experience I had watching Weerasethakul’s Memoria (which was one of my favorite films of last year). However, I wasn’t as engaged with Il Buco as with Joe’s latest. Regardless, I wasn’t entirely gripped or engrossed by Frammartino’s vision during the movie’s first half. However, my attention picks up highly in its second half. Here, we get parallels between the health of the film’s epitome of a natural observer, an old shepherd (Paolo Cossi) watching everything on a nearby hill (who apparently plays the only witness to this discovery), and the actions the explorers make during the culmination of the investigation. In this half, that’s where people start analyzing the most. The viewer begins to think about the different parallels and compare them to the scenery shown.

The shepherd’s fate being woven into the land he watches over, the loss of traditions as modern progress continues to develop, isolations versus peace, and the essence of life as it fades with nature are some of the multiple concepts Il Buco showcases throughout its silent composition. It is hard to explain all its metaphysical metaphors about life and nature intertwined, but I don’t think it matters if one can clarify what it’s all about or not. If the viewer only focuses on what’s happening on the screen, there is a loss of sense of self. It is as if you lose the sense of time and embrace the ambiance presented by Frammartino. It is hard to get into it during its first half, and there are many deep thoughts to acknowledge, yet, admiring the beauty of this filmmaking approach is vast enough to ponder in your mind for many days.