Movie Review: ‘I, Tonya’ is a darkly comedic tale of disgrace 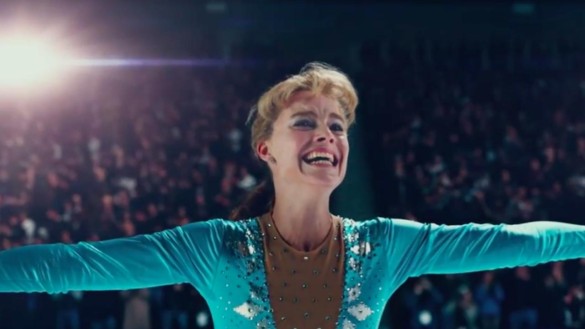 Synopsis: Tonya Harding rises through the ranks of competitive figure skating only to find shame when her husband tries to eliminate her rival.

You don’t really know you need I, Tonya until after you’ve seen it. Fresh off of 2016’s Black List – the best unmade Hollywood screenplays of their respective year – we’re finally provided a completely true, non-contradictory, “biographical” tale of what might’ve transpired on that infamous day of January 6th, 1994, including the buildup and subsequent aftermath. Although it’s approach to the source material are contrary to people’s traditional viewpoints of true stories, with the egocentric and absurd facets bound with it, hopefully it won’t leave a bad taste in audiences mouths.

Even with something as polarizing as this scandal, Gillespie, Rogers and even Margot Robbie prioritize an undercurrent of self-awareness that’s inimitable in this genre. The word genre is such a broad term however. Something as unaccustomed as I, Tonya prides itself on the irony and satirical nature of the ludicrous situation, almost like it’s acting as a parody for a non-existent adaptation besides the actuality of the events. It finds its growth along those lines and prolongs the often self-aware fourth wall-breaks while challenging our perceptions of truth, and what we ourselves grasp as true. That feature, while engaging, begins to get overly excessive as the film progresses.

It’s hard to bring up flaws when they’re so overlooked by the great, but in all simplicity, this narrative is wonky. This applied to the editing also. There’s never anything drawn out extensively and all of the ideas are there, the execution is just a bit askew. Perhaps it’s just because there’s such a few number of films that are like this to where it’s unavoidable, but the film is heavily reliant on the element of cynicism between Tonya and her mother to the point where it becomes so unwarranted. Its structure doesn’t fit with the editing either. Simultaneously jumping from past to present, once we’ve delved in to Tonya’s adult years it slowly starts to go south. It’s easily avoided if not being diligently examined but it didn’t go unnoticed to me.

Margot Robbie depicts this once acclaimed Olympic figure-skater, Tonya Harding and her epically fascinating fall from grace. The film does a good job at tentatively recalling her reign as the top-ranked skater in the world along with being the first female skater to successfully land a triple axle. And most importantly, the iconic Nancy Kerrigan scandal and the media frenzy that ensued. Sadly, most people associate Tonya Harding as a has-been or a what could’ve been, which as brilliantly shown in the film, tends to overshadow her previous achievements. Implying that everything she’s worked for up to that moment is now, well worthless. Nevertheless, Robbie is radiant, who in fact never seizes to amaze. Sebastian Stan as Jeff Gillooly undergoes a bit of a hot and cold session. They set his character up as this hot-tempered, meathead type of guy but soon lose interest in that shtick halfway through the film. Allison Janney as Tonya’s mother is quite possibly the true standout. Dialing her mentality and absurdity up to a ten, and never letting off the gas. Possibly a nomination or two with Robbie and Janney, but I don’t see a whole lot of noise being made in this category.

Steven Rogers is still recovering from his 2015 Christmas blunder with Love the Coopers. In fact, there’s a similar trend going on here. Gillespie and Robbie are also coming off of rather underwhelming films which gives I, Tonya a bit of a passion project feel amidst the three of them. It all seems to (finally) click here. It sets up the factually ridiculous scenarios in a conceited state toward its viewer that indirectly asks them why they’re watching this film. Also giving their fair share of cinematic middle-fingers from time to time. But that’s why it’s such a hit. There’s an arc that transitions them into these ‘awful’ people yet, you can’t stop watching it. An engrossing screenplay, with an alluring cast to back it up.

So is it all true? Well, one can never truly know. I, Tonya raises eyebrows. And for all the right reasons. Shimmering with eccentric performances from Robbie, Stan, and Allison Janney while disregarding principle, it’s overly entertaining. Almost overwhelmingly. It may not be the most advanced film technically, but are you going to remember a movie for its editing/lighting, or for its unequivocal creativity?

That’s her story, and that’s the truth.