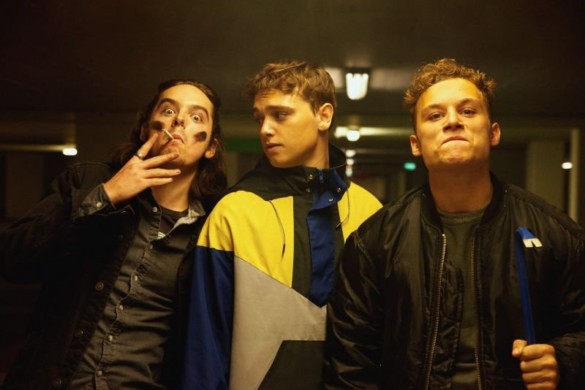 Synopsis: Dublin teenagers Matthew, nihilistic Rez, and the deranged Kearney, leave school to a social vacuum of drinking and drugs, falling into shocking acts of transgression.

When looking through the films that were showing at the 2020 Raindance Film Festival, there were some standouts that I knew I had to watch. Even in a line-up that had the publicized bio-pic Stardust showing at the start of the festival, it was the closing film that had me the most intrigued. Here Are the Young Men does not only have an incredible cast of actors that I have loved over the past few years and deserve more recognition than they get but is the sort of storytelling and film that I naturally gravitate towards.

If you are not already paying attention to the cast in this film, you need to after seeing Here Are the Young Men. Dean-Charles Chapman was incredibly strong last year in 1917, but he gives an even better performance here as Matthew, a teenager who is dragged down a pathway he knows he shouldn’t be going down. I may be one of the biggest fans of the 2016 hit Sing Street, so it was no surprise that I was anticipating the performance from Ferdia Walsh-Peelo. He has quickly matured over the past few years and gives the most heartbreaking performance of the entire film as Rez, which is saying something for a film with this many great performances. I don’t even think I need to talk about how great Anya Taylor-Joy is here, but it may just be my favorite performance from her yet.

There was one person in this cast that I had not seen before this film, and that was Finn Cole. He does have fewer credits to his name (most notably appearing on the British TV series Peaky Blinders), but after this performance, I have a feeling we will see him in more projects going forward. Although I do not love every single scene that he is in, he is the one that drives the narrative forward and gives the most complex performance, despite how simple his character may appear on the surface. Without his performance as Kearney, this film simply would not work.

It is important to note going into this film what the story is and the subject matters it is aiming to handle. This is a very mature and dark film, and some of the content may be shocking or disturbing for a general audience. This film features issues including but not limited to: drugs, alcohol, rape, murder, war, death of a child, and attempted suicide. These are not subject matters that the film takes lightly, either showing the issue happening on screen or reflecting on the impact of those subject matters once they occur. Some of these issues are handled well and maturely, but there are some choices that I did question in terms of tone and narrative.

When the film handles these subjects right, they hit emotionally. The film manages to grasp the attention of the audience within the first ten minutes, making it clear the motives and personalities of the three leading men and what we should make of each one. It gives the film a clear pathway, jumping from Matthew, who is the character that is easiest to connect to, back to Kearney, who we can see has not had the best childhood but is still hard to relate to or sympathize with due to his actions and beliefs. When the film focuses on the real issues and the narrative moving forward, the story is incredibly hard-hitting and it is effective in tone and editing.

However, this is not the only style of filmmaking that is on display with Here Are the Young Men. There are also uses of fantasy aspects, particularly focused on the television. There are some small sequences where footage appears on the television that reflect what’s going on inside of a character’s head, and those sequences do work. However, they also use a television set of a talk-show to have Kearney express his feelings and to show his journey. Every time the film cuts to this set and focuses on this tone, the overall film falls in quality. The tone is so badly done here, coming off as over-produced and arrogant, but that does not match with the subject matters that are talked about, such as rape and murder. It feels incredibly off-putting to have a character talk about the murder and rape of a woman whilst an audience can be heard cheering in the background. Luckily, these sequences are only a short amount of the film and the rest of the story does hold up, getting back to the real representation of the story afterward.

This is a solid direction from Eoin Macken, with an overall strong script and some wonderful performances. Whilst I understand what Macken was trying to achieve with some of the fantasy sequences, they did not work for me at all. I can look past them though when the rest of the film is as well told as this is, and the performances and story had me invested until the very end. A strong choice for Raindance to end their 2020 festival on.