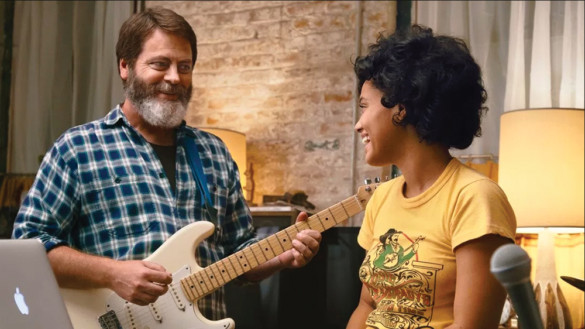 Synopsis: A father and daughter form an unlikely songwriting duo in the summer before she leaves for college.

Brett Haley’s Hearts Beat Loud is the movie that 2018 needed. It’s a film full of heart, laughter, joy and humanity – the exact remedy to a polarized society that finds itself drowning in anger and divisiveness. There is endless charm to Hearts Beat Loud and the experience will leave you full wanting more of these characters.

The film centers on father-daughter duo of Frank (Nick Offerman) and Sam (Kiersey Clemons) during the summer before Same leaves for college. Frank is a widower and Sam is all that he has left. So, this is his last chance to bond with her before his nest becomes empty. Since they both love music, the two of them decide to jam and work on some music together. In particular, they create a song called “Hearts Beat Loud” that garners some notoriety, and it puts some doubt in Sam as to what her next step in life will be. Additionally, Sam falls in love with Rose only complicating her dilemma.

Hearts Beat Loud has an irresistible allure, but what makes it rich is that it quintessentially avoids exposition and unnecessary details that many films tend to get trapped in. Haley and Marc Basch’s screenplay is not interested in explaining things about these characters or where they find themselves in this story. Instead, the film presents them as who they are right now, and allows for the audience to catch up and fill in the missing gaps on their own as the story progresses. As a result, we find out details such as Frank being a widower, Frank being a musician before Sam was born, Sam being the daughter of a bi-racial couple, that Sam is gay and we even find out what happened to Sam’s mom (Frank’s wife). However, those nuances are offered naturally as they would happen in conversation. In some cases they come through imagery alone. The film never relishes in these details and Haley never points a finger at them. He simply presents Frank and Sam as they are right now in their lives, and how that relates to their current emotional state.

Haley’s subtle and naturalistic approach makes Frank and Sam, and their connection in this film, that much more authentic and attainable. He trusts in the audience to participate and be smart enough to put the pieces of the puzzle together in a way that is bold and even daring given certain jumps in time. For my money, it’s some of the best filmmaking I’ve seen in 2018.

Hearts Beat Loud also thrives because of Nick Offerman and Kiersey Clemons, an odd paring that seems like it shouldn’t work on paper. They look nothing alike, yet on screen they could not be more palpable. They have a chemistry that is magnetic, which helps compliment Haley’s writing, and in turn it makes their father-daughter dynamic more than believable.

Offerman needs more leading roles that allow for him to flex his scruffily and rugged muscles. He’s really good here as Frank. He’s balances out his dramatic performance with well-timed humor in a way that felt incredibly seamless. Clemons is equally as great and demands the screen. The camera is in love with her and she emulates an exuberance that is a breath of fresh air. Sasha Lane is also great as Rose in this film. I didn’t love American Honey like most others seemed too, and I honestly feel like she’s better here. She reverberates a lovable charm herself that gives credence to her relationship with Sam. Ted Danson and Toni Collette also offer supporting roles that help make the film sublime. Danson is especially hysterical.

The concoction of Haley’s writing, and how he uses the camera to focus on ambiguity, and the performances in Hearts Beat Loud lead to some of the best scenes of the year. In a music store near the end, Frank and Sam are playing some of their music together and Haley captures this with astounding craftsmanship. The sequences play out like a music video in some ways, but it feels true to the moment and the relationship of Frank and Sam. What works best about the scene is how Haley lingers on the reactions of these players. During one song there’s an extended shot of Rose emoting from Sam singing to her, and Lane lights up the screen. There’s another moment where Frank reacts to Sam questioning whether she should stay home with her dad instead of going to school, and Offerman’s ability to act with his eyes is mesmerizing and poignant. The whole sequence is a delight from beginning to end.

I cannot recommend Hearts Beat Loud enough. While the screenplay lacks exposition, that doesn’t mean it doesn’t have nuance. There are many layers to these characters that come about in ways that are somewhat unexpected. Their motives feel genuine and give this film a warmth that is comforting. It’s a captivating piece of cinema that fundamentally showcases why connection and bonding is important to coping with life’s hefty turns. Also – it’s just really fun. The music is great, the characters are wonderful, the story is sweet and sometimes that’s what we need to escape for two hours these days.