Movie Review: ‘Happy Death Day 2U’ is different, but the same…but different 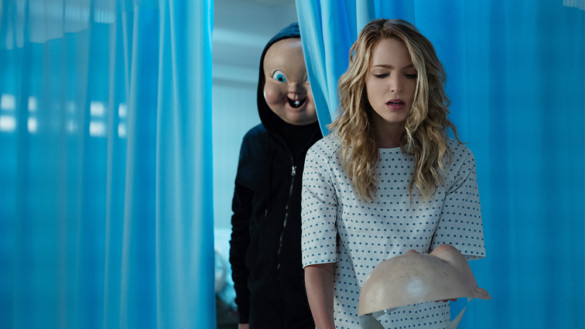 Synopsis: Tree Gelbman discovers that dying over and over was surprisingly easier than the dangers that lie ahead.

Here is the problem with sequels, 9 times out of 10 they won’t match the dynamic and magic of the original. Most sequels fall far from the tree, miles sometimes. Which eventually leads to another sequel, usually worse than the second, either purely as a cash grab or because some up and coming writer honestly thinks they can re-capture the brilliance of the first. Now and then though a sequel manages to outshine its predecessor. Happy Death Day 2U falls somewhere in the middle of these two extremes, it is a good film and a sequel that was worth making but not one that will spark any Twitter wars over which was best. It does do what most sequels fail to do: Keep it simple, take the basic formula that made the first smart and enjoyable, and add a dash of new.

Fans of the original will be pleased to see that the follow-up pretty much picks up where Happy Death Day left off. Tree (Jessica Rothe) and Carter (Isreal Broussard) are an item and seemed to have developed a deeper relationship. Of the supporting cast all the familiar faces are back, even Carter’s quirky roommate Ryan (Phi Vu) returns and this go-around he gets a lot more screen time. In fact, the first 10 or so minutes revolve purely around him. This is both good and bad, Ryan’s arc brings new energy to the story but Vu’s performance can be rough at times. There are also some new faces that bring their own comedic spark and help to keep the story from feeling recycled. Performance wise you can expect about the same caliber as the first film which is perfectly fine for this kind of popcorn flick.

As far as the quality of the writing and script go Happy Death Day 2U will surprise you. When I first saw the trailer I was worried that seeing more of the same would feel redundant and make for a dull film but it was actually quite the opposite. Christopher Landon, who both wrote and directed, managed to branch off the original script and keep the story going by providing us some background explaining exactly why Tree was caught in the original’s loop which, as you may have guessed, leads to Tree once again getting stuck but this time in a “new” loop. This ignites a whole new host of problems for Tree and crew. On paper, it may sound unimaginative but Landon’s execution is satisfying and quite clever. He even adds a twist that prompts some serious questions about Life and how each of our decisions can alter our trajectory. At times it can be a very sentimental film in this way.

But again like most sequels, overall it simply doesn’t stand up to the first. The film has some great comedic moments but it can feel forced at times. The explanation for what triggered Tree to start living the same day over and over is built around vague scientific technobabble which always feels like cheating and can ruin some climactic moments in addition to leaving the audience feeling somewhat left out. There are also some plot holes in the film that never really get filled or an explanation offered. It is not so much that these flaws are so awful, it is that they can be so glaring because we have another film to use as a baseline and constantly make comparisons to. On its own the film still isn’t exceptional in any way but because it is a sequel its shortcomings stand out more.

The first Happy Death Day was a fun film that brought a fresh take on the one-day time loop concept. It was a film that really caught me by surprise and came very close to making my top ten for 2017. The sequel was also surprising, I honestly wasn’t sure it would be able to deliver without relying on the same jokes as the first, but it does. It plays on our familiarity with the characters and story arc of the first film but takes its own twists and turns. Where the film harms itself is in trying too hard for laughs. It brings some unnecessary silliness that was not in the original, the scenes are funny but at times can feel cheap and lack that punch that usually comes with clever comedy. Also, Tree’s hysterical behavior which made her character so charming and comical this time around can wear on you and feel overdone. That is the one part of the film that did feel poorly recycled. Still, 2U offers some good laughs as well as some tender moments that kept things feeling new. This year it won’t make it anywhere near to my ten but I still recommend a watch, especially if you were a fan of the first.