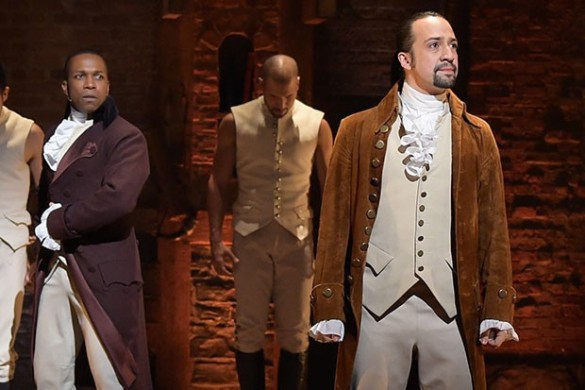 Synopsis: The real life of one of America’s foremost founding fathers and first Secretary of the Treasury, Alexander Hamilton. Captured live on Broadway from the Richard Rodgers Theater with the original Broadway cast.

For the last five years, there might not be anything more important in American culture than the musical Hamilton. From the moment it hit Broadway in 2015, there was nothing else like it, a hip-hop inspired musical about the United States First Secretary of the Treasury. Tickets were hard to come by, with the pricing in the thousands and a lottery established to give away free seats. It made creator Lin Manuel Miranda and his cast members stars overnight. The songs were performed across the world. With the help of the streaming service Disney+, everyone can have the opportunity to experience the event of our lifetime in the comfort of their living rooms with the original Tony-winning cast.

Hamilton is based on Ron Chernow’s biography about the American Founding Father. Told through the lens of his friend turned rival Aaron Burr (Leslie Odom Jr.), we see Hamilton’s (Miranda) rise and fall of his political career. We also explore the complications of his personal life, and the legacy he is fighting to perceive. The first act tackles his time during the American Revolution, where he helped George Washington (Christopher Jackson) and America’s allies secure our independence. At the same time, we’re introduced to Hamilton’s wife Eliza (Phillipa Soo), and her sister Angelica (Renée Elise Goldsberry). Both women are intricate in Alexander’s life, inspiring him to chase the version of America he wants for all of us.

In the second act, we follow Hamilton and the nation after the Revolutionary War and the start of our country. We also see him go toe to toe with Thomas Jefferson (Daveed Diggs) and James Madison (Okieriete Onaodowan) within Congress during the Washington administration. As every event plays out, Burr’s frustration towards Hamilton grows by becoming jealous of his rise to power, destined to see his foe fail. Lastly, throughout both acts, we are given little snarky opinions from England’s King George (Jonathan Groff), gleefully watching America’s adolescent leadership from afar.

In this 160 minutes’ journey, we not only take a glimpse into the life of a great man, but we take a look at the beginning of our country, told by actors and artists that represent our time. In an era where representation across all media needs to improve, Miranda bestows his beautiful lyrics into the hands of men and women who we’ve never seen in parts like this. Refreshing to see, “Hamilton” can branch out to every human being because of this initiative inclusion. When people are young and see someone on stage or screen that looks like them, they can believe in their dreams. Then they can take a shot at becoming the next great individual in the field they are pursuing. They embody the American dream.

Beyond this message, Hamilton is also a beautiful, insightful look into America’s History. For the most part, Alexander Hamilton isn’t mentioned a lot in our history classes when we are young. To learn more about him from a musical than in our local school systems is downright embarrassing and proves we all need to do a better job in learning our countries history. Miranda’s battle cry throughout his music is for Americans to maximize their knowledge of everyone and everything within its history. With this, we can understand our past to fix our current politics and society. Everyone has a story to tell, and it can be just as fascinating as someone like George Washington or Thomas Jefferson.

All these ideas and issues are conveyed even more powerfully on film than watching it in a theater. When director Thomas Kail zooms his multiple cameras around, we catch the stage production’s true humanity. Every emotion is heightened, from smiles to tears, looking at the hard work it takes to portray characters in the creative style Miranda has written them. You can see how every word flows beautifully from memory as it goes and conveys the heart of a revolution and a love for a country they want to live in freedom. In terms of cinematic experiences, Hamilton is right up there with anything you will see in 2020.

Each performance shines with many moments to make you cheer and get misty-eyed over. While Miranda and Odom Jr. are great leads, “Hamilton” is elevated over other musicals due to its supporting casts. From the infectious fun of Digg’s Thomas Jefferson’s “What Did I Miss?,” to Jackson’s encouraging “One Last Time,” to the heartbreaking solos from Goldberry and Soo with “Satisfied” and “Burn,” they’re the performances you will remember when the end credits start to roll.

In the end, Hamilton is excellent no matter how you see it. Whether it’s on stage or film, there is no way you can say it’s not one of the best art pieces of all time. As humans, we want to nitpick and deconstruct things that are universally loved. But with this material and all the talent involved, it’s clear Hamilton is too damn perfect.