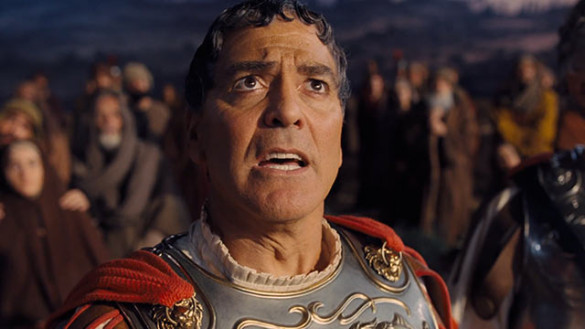 Synopsis: A Hollywood fixer in the 1950s works to keep the studio’s stars in line.

Let me start off by saying, this film isn’t going to be for everyone. Joel and Ethan Coen have delivered some wonderful and bizarre comedies over the years, but they have been certainly divisive among audiences. Even The Big Lebowski wasn’t highly regarded by everyone at the time of it’s release but has since gone on to become of the largest cult hits of our lifetime. I don’t think Hail, Caesar will ever get to that level but over the years it could resonate more with some audiences. Others will love it immediately, and you can count me in that group.

The film opens with Eddie Mannix (Josh Brolin is wonderful), the head honcho at Capitol Pictures, in a confessional booth as he begins his day. The moment is earnest and sweet. Once he arrives on Capitol grounds, the film becomes a bit more zany at that point. We see the filming of several movies going on, including a biblical epic called Hail, Caesar, which stars Baird Whitlock (George Clooney) who is being targeted for something we’re not sure of yet. Soon after shooting starts, he is kidnapped and held for ransom. Simultaneously, young actress DeeAnna Moran (Scarlett Johansson) has become pregnant out of wedlock and that is a PR nightmare for Mannix. Esteemed director Laurence Lorenz (played wonderfully by Ralph Fiennes) is about to lose control of himself after acquiring actor Hobie Doyle (played by Alden Ehrenreich, who is arguably the film’s stand out), a cowboy movie star now having to learn his way through a dialogue-driven drama. If that wasn’t enough, Mannix also has to deal with gossip columnist sisters, Thora and Thessaly Thacker (Tilda Swinton), who are pestering Mannix at every turn along with executives at Lockheed Martin who want Mannix to leave the Hollywood “circus”.

Admittedly, this isn’t going down as one of the Coen’s masterpieces, but it could be one of their most essential films. As chaotic as the film will seem on the surface, at it’s center, it’s a crisis of faith movie that is convincingly genuine. In fact, it pairs really well with previous Coen films, such as Barton Fink and Inside Llewyn Davis, that explore these notions of internal lostness. The 1950’s time period depicted here also supports the idea this is essential Coen viewing as the Coen’s have made a career making films that honor classic Hollywood. So it just makes sense that they dive directly into the Golden Age of an industry they passionately love. And let’s be clear, even though there is genuine and funny satire here, this is a love letter.

It’s a passionate love letter and you can tell the Coen’s were having a lot of fun. They use the era like a cinematic playground as they dabble into several different genres, including a hokey cowboy movie, a Gene Kelly-inspired musical, a prestigious 50’s Oscar drama, a Biblical Epic and an Esther Williams-inspired aquatic scene. Even the Mannix story thread is shot like a 50’s film noir, which cinematographer Roger Deakins paints beautifully here.

The film is a riot but it isn’t just bells and whistle’s. It will come across as a Hollywood farce set in the 50’s on the surface, but bubbling underneath it’s also a film about faith, lostness and longing for something more. Tonally there’s a jarring balance between the chaos of Hollywood and this genuine “crisis of faith” that is exemplified through the Mannix character. In a way only the Coen’s could do, Mannix grips the centerfold as a character that is grounded and very flesh and blood, especially when juxtaposed to every other character in this film, who is depicted as over the top and a bit cartoonish. That depiction and that chaos, however, is very purposeful. In a world surrounded by chaos, the Coen’s want to ask these questions of how one maintains their humanity in a world that seems soulless and lost. “Divine presence to be shot later” a title card reads as Mannix is watching an unfinished version of Hail, Caesar. In another scene, Mannix tries to get a Rabbi, a priest and other religious leaders to agree on how “God” is shown in Hail, Caesar and they can’t really agree (the scene is important thematically and also hysterical). It’s not just Mannix too. Remember that group that kidnapped Baird Whitlock? Well, at the root of their motivation, they are seeking answers. Whitlock himself starts poking for truth after confronting his kidnappers. Burt Gurney (Channing Tatum, who gives arguably his best performance of his career and his musical dance number is something to behold) is a man seeking validity. DeeAna Moran is looking for something familial. Everyone is looking to put their faith in something, whether it be God or the movies, or just something. It’s of course ironic given the reputation of Hollywood but in an industry that has no room for faith, it is full of people in dire need of it.

So, is it a coincidence that Hail, Caesar (the movie within a movie) is about an outsider who is overcome by “truth” in the middle of a place that feels hopeless? Well I’ll leave that up to you to decide. At any rate, the film is littered with faith and finding our humanity in the middle of the chaos. Again, a notion explored before by the Coen’s but done here in a way that works congruently with the rest of their filmography.

The Coen’s prowessness for balance is also important to note here, as it’s never overtly satirical. It’s jabs toward Hollywood are limited and the balance of recognizing the chaos but also giving us grounded humanity results in the film being playful, not harsh in it’s satire. As mentioned, it’s more of a love letter with some cheerful commentary. So yeah, the film is quirky, zany, messy, uneven and it’ll leave some audiences confused and lost. But I think that’s kind of the point. That unfocused feeling crescendo’s in a beautiful and fun journey exploring one’s crisis of faith. It may not be the Coen’s best film but it gave me what I adore about the Coen’s and I left satisfied.