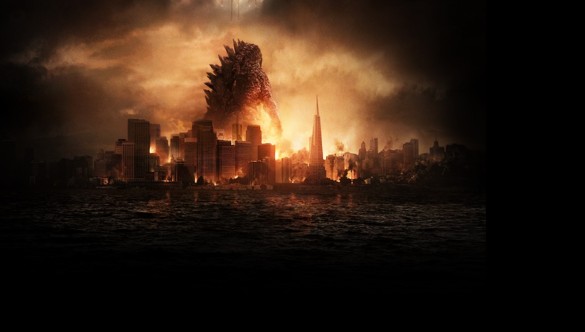 Synopsis: The world’s most famous monster is pitted against malevolent creatures who, bolstered by humanity’s scientific arrogance, threaten our very existence.

DIRECTION
Coming of the heels of Monsters in 2010, Gareth Edwards looked to show that his small sci-fi film wasn’t a fluke, and boy, did he deliver with Godzilla. The opening credits sequence immediately sets the tone, helped by Alexandre Desplat’s brooding score, and throws us into a wonderfully crafted exposition that never slows down. Edwards’ camera work was impeccable, fluid and moving with intense purpose. The pacing was solid, especially when it came to showing us the monsters (no pun intended) of the film. Every time we see Godzilla, it’s incredibly purposeful and perfectly timed, which ultimately just makes you lust to see more of him. Much like Pacific Rim, all of the action sequences take place at night and either in the rain or clouded in smoke and debris, however that only adds to intensity of the film (much how I felt about Pac Rim too). The fight sequences at the end between Godzilla and the monster creatures are amazing, a ton of fun, and riveting the entire time. The execution was flawless. Everything from the dangerous aesthetic, to the riveting creature design, to the robust score, Edwards showcases his skills on a high level and that he’s a director to look out for.

SCRIPT
The films starts with an amazing opening credits sequence, showcasing 1940’s/50’s footage of nuclear explosions and a newly discovered water creature that forces the creation of new government organizations to help keep this under wraps. Fast forward to 1999, Dr. Ichiro Serizawa (Ken Watanabe), who is the head of a secret group who is tasked with studying these creature’s, has found a preserved skeleton of a creature similar to the one they found in 1954. However, they find a few things that make you go “uh oh” and now things are really setting in motion. We are then introduced to Joe Brody (Bryan Cranston), a seismologist who is working in Japan at a nuclear facility and notices a pattern that doesn’t seem to say earthquake, yet nobody seems to really know what it is. After a series of events, we fast forward another 15 years (to present time), where Brody’s son Ford (Taylor-Johnson) is on leave from the Navy and heads home to see his wife (Olsen) and son. After a short time at home, Ford is forced to go to Japan to help his father, who has calculated a conspiracy theory regarding the nuclear facility. While we see a strain in their relationship, the two of them find themselves trying to find the truth when they are arrested by Serizawa’s group. From there, chaos ensues. A monster escapes, people are killed and panic seems to be consensus. The U.S. government and NATO are now taking control over efforts to contain the situation. From here, it’s a cat and mouse game of trying to take down these creatures, while Godzilla seems to have a similar notion when he faces up against them. The insertion of these creatures, who feed off of nuclear radiation, felt natural and real, while many of the human characters felt lost and confused. Outside of the Cranston arch, much of the human story isn’t that compelling but it doesn’t matter, when Godzilla shows up, it’s amazing.

PERFORMANCES
Bryan Cranston is amazing and is easily the strongest one here. His character has a lot of passion, is heartbroken and feels compelled to find the truth no matter the cost and Cranston showcases that well. In the end, I just wanted more of him. Aaron Taylor-Johnson is an actor I like, but he’s incredibly flat in this role and didn’t seem very inspired. He seemed lost and not quite sure where to take his character. As a side effect, the relationship between him and Elizabeth Olsen suffers. It’s hard to invest in their relationship, as well as the father-son relationship between Taylor Johnson and Cranston’s characters. As the main lead in the second and third acts, Taylor-Johnson is mundane and average at best, which is disappointing coming from him. Olsen is okay but is mostly wasted as we only see her in a few scenes here and there. Ken Watanabe is another great actor, but he’s in unintentionally humorous with his confused look throughout the film. It’s as if his whole time investigating these creatures, he couldn’t believe they were real, which came off kind of funny. As much criticism as Pacific Rim received for it’s acting, outside of Cranston, the acting here isn’t any better. The best performance of this film, far and away, are the two monster creatures and Godzilla. Every time they are on screen, you are on the edge of your seat.

SCORE
This feels like a strange film for Alexandre Desplat to score, but his music here was fantastic. It’s harrowing at times, intense and is more than serviceable. Desplat uses a nice layer from the original Godzilla in his main theme, which was a nice touch as well as nostalgic. Most of the music isn’t very catchy and it’s not a score you’ll listen to much outside of the film, but for the movies’ sake, it’s great.

FINAL THOUGHTS
One of my major concerns going in to this film, was going to be the crystallization of it. Planes, tanks and guns were not going to do it after watching Pacific Rim last year. And honestly, three-fourths of the way through, I started to think to myself “to defeat the monsters, we had to create monsters of our own.” However, the turn Edwards and his team makes and the fight that ensues at the end more than makes up for the absence of Gypsy Danger. It was incredible. Godzilla isn’t a perfect film by any means, but it takes aspects of what we know about Godzilla and pieced it together in a way that felt real, intense and big. Go see this film.