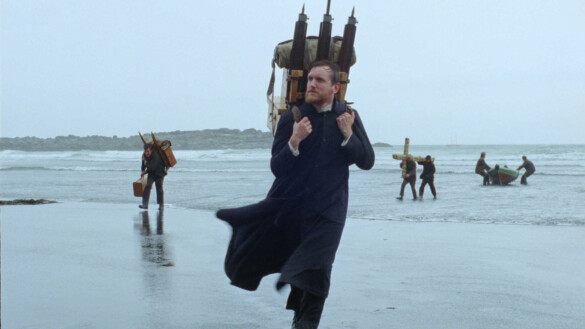 Synopsis: In the late 19th century, a young Danish priest travels to a remote part of Iceland to build a church and photograph its people. But the deeper he goes into the unforgiving landscape, the more he strays from his purpose, his mission and morality.

Many films screened in the Contemporary World Cinema selection at this year’s Toronto International Film Festival (TIFF) have been great delights. However, Icelandic writer-director Hlynur Pálmason’s latest feature, Godland, stands out for multiple reasons (cinematography, screenplay, performances), but it is its devastating and beautiful examination of one’s purpose in life and confrontations with morality when they arrive on unfamiliar grounds. In addition, it is also a critique of the colonizer ethos that has transpired in the past. He isn’t quite well known in the United States, but Pálmason is a director with a poetic yet austere directorial vision. His style is distinctive, and on occasion muscular, but takes inspiration from great filmmakers like Werner Herzog (Aguirre, The Wrath Of God), Carlos Reygadas (Silent Light), Carl Theodor Dreyer (Days of Wrath), and Terrence Malick (A Hidden Life). However, his panache leans more toward Herzog than the other two. There are some distinctions between Pálmason and Herzog’s work – the inclination toward atmospheric dread, the abrasiveness of its pacing, and the acute use of scenery and location.

Those aspects can be seen in his previous features, A White, White Day, and Winter Brothers, but it is even more present and polished in his latest, Godland. A few months ago, Pálmason showcased his simple yet brilliant short film Nest, which broke the hearts of those who watched it. Now, he delivers his second project of the year – a spiritual fable set at the end of the 19th century about the Protestant religion’s ethos and ethics. It focuses on a man whose morality will be challenged as he’s forced to survive in an unfamiliar land. At the center of this story is a young Danish priest named Lucas (Elliott Crosset Hove), who has been chosen to build a church in the chilly north of Iceland before the winter hits. He also has to document the local communities there via photographs. He may be a skilled photographer, but Lucas will have other things to worry about once he makes his way to Iceland, other than the hostile environment and midnight sun – a phenomenon in which the sun remains visible for the entire day, never fully setting.

This brimming sunlight amidst a chilly atmosphere creates a sensation that feels as if time is standing still, even though it is evident that it’s still transpiring. And the simmering volcano, which is always tempting to make an appearance in the background adds to the brooding and unforgiving nature of the Icelandic environment. Lucas’ journey, however, will be much more complicated than he expected, even with a native guide as assistance, but not for the reasons one would expect. There are confrontations with the powers of nature, causing a few deaths due to the strenuous climate and Lucas and crew not being fully prepared for such a trip. Yet, the biggest quarrel that Lucas has to face is with his morality. What happens to humans when they are pushed to their limits? His religious hierarchy cracks once he’s overburdened by the challenging demands of the journey for enlightenment – showing sides that conflict with his beliefs (pretensions and misconceptions).

Once he starts forging relationships with the townsfolk, especially a local’s two daughters, Anna (Vic Carmen Sonne) and Ida (Ída Mekkín Hlynsdóttir, who is turning into one of the best young actresses of today’s generation, in my book), things take a turn for the worse, beginning the final steps in Lucas’ virtuous demise. The dynamics the young priest has with the various characters in the film add to the element of slowly-boiling heavy-hearted despair. Confrontations arise from the feud between Danish and Icelandic people regarding their opinions on what civilization is supposed to be and how religion features in it. Lucas grows impatient as he wants to reach his goal of building a church “for the people”. However, he isn’t acknowledging their beliefs and way of living their daily lives, hence countering his “religion has all the answers” message. Seeing a person gradually reach his lowest spiritual point imaginable is devastating. As nature breaks the body, the people’s notions shatter his mind, drained of his being – developing the well-known theme present throughout Godland’s entirety, nature versus nurture.

With a directorial hand fueled by atmospheric dread and the simmering active volcano, Hlynur Pálmason delivers a demanding and utterly fascinating lengthy grim story about the colonizer’s toxic vanity. Pálmason takes some of the themes he used in his previous features, masculinity and their tale of vengeance, and puts them into a narrative that revolves around religion, sacrifice, and apostate. You see how his mission transitions into something that doesn’t reflect what the “words of the Lord” would say, contradicting his initial persona and marking the film’s title, Godland, as ironic. Days turn to weeks, and weeks turn to months; we see the reflection of the passing of time through animal carcasses, the buildings changing their color (or deteriorating), and the beautiful shots of the landscape. The purpose of this is to submerge Godland with proper amounts of eeriness and aversion, captured beautifully by cinematographer Maria von Hausswolff. The 4:3 aspect ratio used here creates another layer to the film, as the look reflects the photographs that Lucas makes once in a while.

To juxtapose with Hausswolff’s style of shooting, Pálmason takes time to bask in the process of taking these pictures, with seconds of stillness before the camera operates and the scenery popping each time around. There’s also a scene on a beach that reminds me of Jane Campion’s The Piano, as Lucas arrives on the shores with a deer-in-headlights face, not knowing what to expect as his journey has just begun. Godland contains some somewhat predictable narrative decisions, but Pálmason is confident in his craft and Elliott Crosset Hove delivers a hefty yet subtle multi-layered performance that is impressive all throughout. This is the type of film that some people might be impatient with, as its pacing is slow and brutal at the same time. However, if you take time to bask in it, you will be treated with a magnificently crafted feature – the work of a filmmaker who is slowly paving the way to create his masterwork.