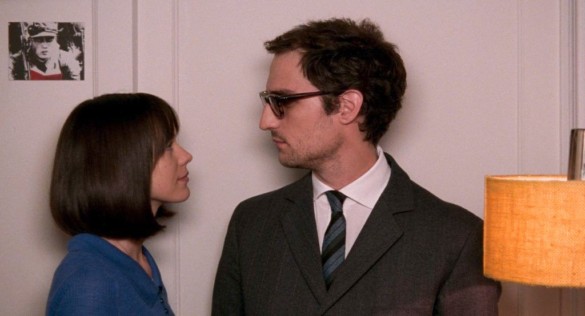 Synopsis: During the making of one of his films, French film director Jean-Luc Godard falls in love with 17-year old actress Anne Wiazemsky and later marries her.

Godard Mon Amour (Godard, My Love) is the U.S. title for Le Redoutable, the latest film from Oscar-winning director of The Artist, Michel Hazanavicius. Much like The Artist, this is a cine-literate take on a past era of cinema, in this case the French New Wave, but this is a much more exclusive film than the silent black and white masterpiece and is much more divisive a watch.

The film tells the story of Anne Wiazemsky‘s relationship with pioneering French film maker Jean-Luc Godard through the period of time where the famed New Wave director moved from being an entertainer though to being a polemicist, a man with very strong opinions who is not afraid to voice them. Anne and Jean-Luc meet on the set of the director’s ill-fated nod to the Chinese revolution, La Chinoise, a film the Chinese embassy rejected summarily when the director attempted to get it shown in the country. The film is widely thought of as not being very good, not understanding the politics of the subject matter, and doesn’t do very well financially or critically. Godard announces himself as dead, done with film-making, an actor playing the role of Godard.

Anne, infatuated with the great director, despite her being nineteen and eighteen years Godard’s junior, falls in love and the two embark on a passionate romance, culminating in marriage and, ultimately, divorce as Godard’s radical leanings and explosive, often offensive, political statements destroy his fan-base, his friends, his supporters and his life as once was.

Opening in 1967 the film’s initial focus is the effect the general strike and violent demonstrations by students desperate for change that ripped through French society in May 1968. Godard, Truffaut and the rest of the New Wave directors were also motivated to change in the depressed, shattered post-war French cinema industry, then churning out mediocre literary adaptations. The New Wave (La Nouvelle Vague) tore up the ‘cinema du papa’ rule book with lively, introspective, humorous, artistic films with visual innovation, a handheld documentary style, live audio recording and other startling techniques – it was the birth of the European art house movie scene and, when Jules et Jim, and Breathless became financial successes it was clear that something extraordinary was occurring in France at the time. Many of the New Wave directors combined their desire to re-invent cinema with politics, but none to the extent of Godard whose dislike of the established film industry went to extraordinary lengths and shook the European film industry to its very core.

This film is billed as a comedy, but, as I hope you can appreciate, it’s pretty dark and grim, especially for our leads. Both are excellent in their roles, Louis Garrel nails Godard’s slightly world weary hang dog look and sells the passionate defense of indefensible positions (at least to the view point of his liberal middle-class friends) perfectly. He is also bewilderingly complex, hard to get your head around, much like the real Godard. Stacy Martin as Anne is extremely good, not only as a visual match to the actresses of the New Wave (she looks impossibly chic in the period clothes), but also conveys the desire, fear and awe of being Godard’s lover – the responsibility for supporting and protecting him – even as he begins his self-destructive path. Both are excellent.

The film, also, is brilliantly put together. There is an energy and pop to the scenes and images, all stolen from New Wave techniques, but combined with realistic  scenes of violence during the depictions of the riots and the fear and terror of being on the streets during that time. Hazanavicius has a lot of fun with these nods and winks to the styles of the New Wave as he employs them to enforce his story. It is also dryly witty, sly and cunning in its humor. One scene has both leads in the nude discussing the requirements for nude scenes in films (and deciding that there is no requirement) – like I say, witty. It is not laugh out loud, it is chucklesome, perhaps on a par with a lesser Woody Allen. This is not this reviewer’s taste in humour, but it was nicely done.

The film, however, is not without its problems. Firstly, unless you are up on your French social history, the geopolitical situation of the World circa 1967, and French New Wave cinema, then a great deal of the detail, homages, story points, and jokes will be missed. I confess I was not up to speed on ANY of this before seeing the film and it is only afterwards, through reading more about Godard, New Wave and the like, that many of the points become clear. I think if you are interested in this period of history, or the New Wave cinema movement, you will get more out of the film than I did.

Secondly, and a little more troubling, is the lack of clarity as to WHY Godard chooses to become so destructive to himself. We get a very documentary-style look at Anne Wiazemsky’s time with Godard, but we get no insight into what is driving the man. I know the film is told from Anne’s point of view, but Godard is a complete enigma and Hazanavicius seems unsure as to how to play the story. Initially we feel that Godard’s leap into politics, and the clumsy naivety he employs, is a knee-jerk reaction to the reception of La Chinoise, but as the film progresses we move through possible mental illness, innate cruelty, political passion, dislike for those closest to him, or simple enjoyment from being so disruptive. There is a running gag that Godard’s distinctive glasses keep getting broken, literally rendering him blind to see what is happening, but he is willfully cruel to fans and friends, and the closer he tries to get to the youthful student movement, the more pathetic he seems, and the more the students themselves lose respect for him. Ultimately this is a film about the fall of a narcissist, and a cruel one, but one that also is a great artist. The trouble is we don’t get a chance to know who we should feel about this. Which is very New Wave in itself.

I enjoyed this film, I think it looks great, is very well acted, and is so French you can almost smell the garlic. It is exceptionally chic and stylish, it is sexy and playful, and Stacey Martin is superb. However it is slightly muddled and unclear, which means it is not a bio-pic in the truest sense of the word – we fail to come away with an understanding of Godard – but it is engaging, illuminating, and sad.