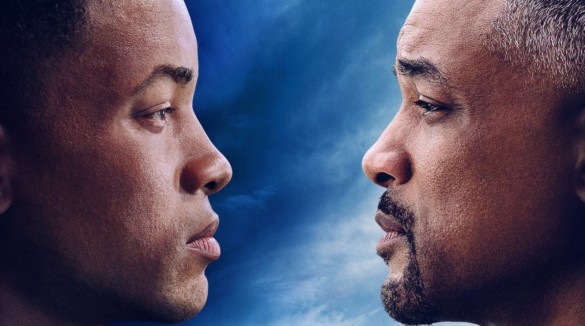 Synopsis: An over-the-hill hitman faces off against a younger clone of himself.

When I heard an action-sci-fi movie was being made by the amazing Ang Lee, written by Game of Thrones writer David Benioff, produced by Jerry Bruckheimer, starring Will Smith, and Clive Owen as the antagonist, I was onboard immediately. How could it possibly be bad? But then the trailers came out and the negative comments started and I tried to not get my hopes up. After seeing the film, I’m left confused. It wasn’t a bad movie, but it wasn’t spectacular either. How could a film have that many things going for it and still come off as a decent made-for-TV (or Netflix) movie?

Gemini Man is about soon-to-be retired hitman Henry Brogan (Will Smith). After he completes his last job, men (including a suspiciously familiar hitman) are sent to kill him and his friends. Brogan, along with his companions Danny (Mary Elizabeth Winstead) and Baron (Benedict Wong), go on the run to find out why people are trying to kill them and where this mysterious assassin clone came from.

Even though the overall movie isn’t great, Gemini Man does have a lot of decent elements. The special effects are better than expected (after seeing the cringeworthy trailers for the past year), especially the fight scenes. Fight scenes with massive amounts of CGI are usually messy or hard to watch (see Venom…), but the sequences in this film were interesting, weren’t blurry, and they were easy to follow. This is Ang Lee’s second film released in 4K 3D at 120fps, after Billy Lynn’s Long Halftime Walk (2016). Unfortunately, my local theaters weren’t offering a showing in the 120fps, but honestly, I don’t think it would have changed my opinion of the film. If you have the opportunity to see it in its 4K 3D 120fps glory, then I recommend you do so. The double Will Smith scenes aren’t bad either, the effects turned out okay, but I spent the entire time thinking “why didn’t they just use Jaden Smith?” They look incredibly similar, save for their voices, it seems like a waste to spend all that money on tons of CG. Maybe Jaden was busy doing other things or didn’t want to be in another movie with his dad.

The true hero of this film is Benedict Wong. He is the comedic relief, Brogan’s oldest friend from work. He instantly improves every scene he’s in and makes the whole movie more enjoyable. Will Smith basically plays “action hero Will Smith”. Not bad, but nothing we haven’t seen before from him. Mary Elizabeth Winstead was mediocre. I don’t think it was entirely her fault, I think that she did the best with what she was given. My biggest complaint from the cast was Clive Owen as bad guy Clay Verris. Owen had such great bad guy potential, I thought this would be a good role for him, but he was bland and unconvincing. It was extremely disappointing, especially since this is one of my pet peeves with action movies (especially recently)- actors who have massive villain potential, but end up boring or awful. It’s not always their fault, but it’s a trend I’d like to see go away.

Overall, Gemini Man is an okay film. It’s not awful, but it’s not spectacular either. It feels very much like an expensive made for TV or streaming movie. If you leave your high expectations at the door and go in looking for a pretty, but basic sci-fi action flick, then Gemini Man is worth seeing (especially if your theater has the 4K 120fps option). It doesn’t bring anything new and exciting to the genre, but it was fun to watch.