Movie Review: ‘Freaky’ is a Side Splitting Queer Horror Romp 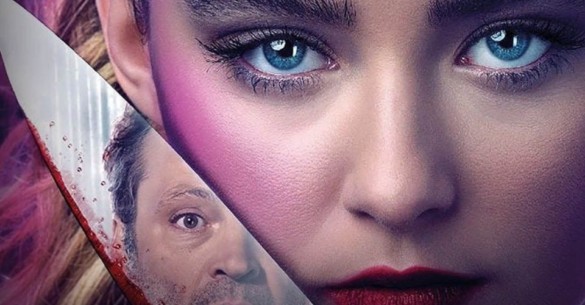 I’ve been a big fan of Freaky co-screenwriter Michael Kennedy since September 13, 2018—the day the first episode of Attack of the Queerwolf dropped. Attack of the Queerwolf is a podcast that was designed for people like me: queer horror lovers. For two years, Kennedy, his co-hosts, and their many fantastic guests have dissected horror films through a modern queer lens, offering thoughtful takes that have made me reconsider my feelings about numerous films. They’ve broken down how some personal faves may actually be fundamentally problematic, and they’ve cleared up how some stuff that may appear problematic could be interpreted as empowering from the perspective of someone else’s lived experience. So, when the news broke that Kennedy and Christopher Landon were teaming up on a project, said project instantly shot to the tippy-top of my list. And I must say, theydies and gentlethems, Freaky did not let me down.

Christopher Landon is on a roll. Happy Death Day was a riot, the perfect blend of slasher goodness and cheeky fun. Then Happy Death Day 2U somehow completely upended the idea of genre storytelling and managed to weave in one the most emotional gut-punches in contemporary horror. With those two films, Landon succeeded at putting a unique spin on the time loop story trope that is so common to science fiction and high concept comedy. Herewith Freaky, Landon and Kennedy tackle another story trope—the body swap scenario—and once again… success! Critics and online personalities quick to dismiss the film as a hackneyed ripoff or a shameless retread are just downright silly.

Let’s consult a master, shall we? In the introduction to his novel The Damnation Game, Clive Barker posits, “Perhaps the true merit of a tale is not its originality (what tale could ever truly be without precedent?) but in the intensity of its retelling, which may momentarily unseat all expectations.” And that is exactly what Landon and Kennedy do here. They’ve taken yet another high concept comedy blueprint and repurposed it into a hysterical slasher film.

In Freaky, instead of a mother and daughter switching bodies and learning firsthand the particular hardships that each face every day, we have a teenage girl switching bodies with a serial killer. Kathryn Newton plays Millie Kessler, who would make a perfect final girl in a standard slasher flick. Millie is a somewhat plain high schooler who’s still reeling from a recent family tragedy, but that does not prevent the onslaught of savage bullying she receives daily. She’s a smart, kind senior with a crush on the soft jock who finds herself adrift—with tons of untapped potential and power. Then one night she almost becomes the next victim of Blissfield’s local deranged murderer, because every small town has one of those, right?

Vince Vaughn plays the Blissfield Butcher, who is not your run of the mill serial killer. He doesn’t just stab and slit throats. The Butcher is heavily inspired by the slashers of the 1980s. He brutally kills his victims with just about any object within arm’s reach—wine bottles, toilet lids, circular saws—and these kills can get ugly. Clearly, Christopher Landon was not planning to shoot another PG-13 horror movie (not that there’s anything wrong with that). When the Butcher sets his sights on Millie, his weapon of choice is an ancient mystical dagger that he took from the home of his previous victim. But instead of taking Millie’s life, the dagger puts her soul in the body of the Butcher and vice versa. Ya know as magical blades are wont to do…

In addition to the thrilling deaths and the pitch-black humor, Freaky gets queer as hell. And unabashedly so. First of all, we have Millie’s friend Joshua, played by Misha Osherovich. Joshua is the type of character I wish I’d been able to see on-screen growing up closeted in rural Ohio. Admittedly, I was not bullied for being secretly gay, but I did feel alienated a lot of the time. So had I, already a horror fanatic by my teens, seen someone like Joshua in a movie, it would have been a life-altering experience. I mean, who else munches on Flamin’ Hot Cheetos while watching Luann de Lesseps nearly get bucked off a camel when he should be on guard duty? Me. I do that specific thing.

Freaky also takes advantage of its premise to explore identity and gender. After all, how could a film written and directed by gay men about a teenage girl switching bodies with a middle-aged man not do that? For instance, Millie’s friends effortlessly continue to refer to her with feminine pronouns, even when she’s played by Vince Vaughn. Likewise, they use masculine pronouns when mentioning the Butcher, even when Newton plays him. This conscious choice may seem innocuous, but it’s important to note that the film is affirming that a person’s body should not define who they are. It’s also interesting seeing each character explore the new sets of privileges and drawbacks that come with their new physiques—the ways they move about a familiar community in unfamiliar bodies—since this imperfect world of ours, unfortunately, does assign social norms to individuals based on their physical attributes.

Given that he’s playing an adolescent girl, Vaughn has the showier role. As a performer, he seems especially aware of his 6’5” frame and how he occupies space. He gets to have fun with the pitch of his voice, the gait of his run, and the acrobatics of his facial muscles. With the more dialed in—and perhaps more interesting role—Newton undergoes an entire transformation. Her screen presence completely shifts. As the Butcher, Newton becomes a commanding beacon; she develops quite a grave demeanor, and it’s pretty striking. The Butcher also has a slick fashion sense, apparently, with a penchant for badass jackets that could probably be found in Sarah Michelle Gellar’s walk-in closet.

What’s so great about Freaky is you can tell that Landon and Kennedy loooooove horror. They absolutely embrace their R-rating and go for broke with this film’s kills, with its vulgar humor, and with the unexpected heart at the core of it all. Studios sure don’t make slasher films like they used to and that’s too bad, but if Freaky is a sign of what’s to come, then consider me excited for the future of the genre… Freaky is the type of off-kilter horror I wish I’d seen in my closeted days. Queer horror is so important, and I’m so happy that today’s youth will grow up with a movie like Freaky.