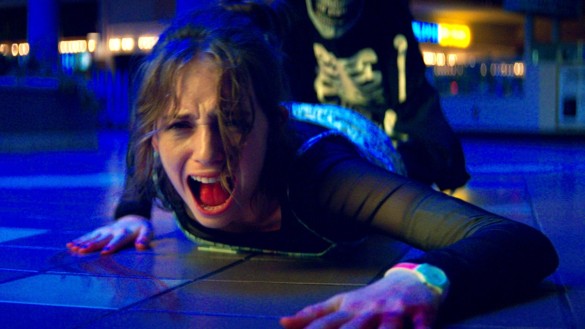 Synopsis: A circle of teenage friends accidentally encounters the ancient evil responsible for a series of brutal murders that have plagued their town for over 300 years. Welcome to Shadyside.

For anyone like me who grew up reading the Fear Street books, there is a great delight to be had in watching Fear Street Part 1: 1994, the first in a new horror trilogy on Netflix that continues with a second film set in 1978 and a third film set way back in 1666. How fitting that the first installment is set in 1994, the year I probably devoured the most R.L. Stine Fear Street books when I was nine years old going on ten. Stine has always known how to craft a compelling suspense yarn, and this film’s director Leigh Janiak, who previously directed the slick thriller Honeymoon and two episodes of the Scream TV series, has a similarly adept set of skills. This first installment could be lighter on exposition at times and heavier on actual scares, but overall it’s filled with lots of bloody fun.

The film opens at a mall late at night, where Heather (Maya Hawke) is closing up the bookstore, which just so happens to be stocked full of Fear Street novels by Robert Lawrence (a nice touch there from the production department). A killer dressed in a black skull costume appears and stalks her through the mall, leaving plenty of victims in his wake. The beginning of the film, which resembles to a great extent the iconic opening minutes of Scream, has lots of energy and style and is easily one of the best sequences, launching the story with not only a heart-pounding chase but also an intriguing mystery.

Yes, Fear Street Part I: 1994 (and the whole trilogy it appears) is more than a series of familiar scares and gory slashings: a supernatural whodunnit takes hold right from the start, one that grips the small town of Shadyside where Deena (Kiana Madeira) is trying to get over the girl of her dreams Samantha (Oliva Scott Welch), and Deena’s brother Josh (Benjamin Flores Jr.) likes to spend his time on America Online debating with his online buddies the evil that’s been lurking in his city for hundreds of years. Also along for the terrifying ride include Kate (Julia Rehwald), Simon (Fred Hechinger), and a police officer Nick (Ashley Zukerman), who never seems to be bothered by all the dead bodies piling up.

Something the filmmakers did right in this adaptation was making it a blood-soaked, R-rated adaptation of Stine’s novels, not some lame, watered-down PG-13-rated snooze-fest that likely would have been the case if this trilogy had been only one film released in theaters. With the streaming model, Janiak was able to make this into the film it was supposed to be, filled with swearing and sexuality and grisly death scenes that fit the spirit of Stine’s more violent novels that were a step up for readers sick of his safe, sillier Goosebumps books. I also think it was smart to not directly adapt three specific Fear Street books and instead create new stories that screenwriters Janiak and Phil Graziadei appear to be doing here, the same way the successful 2015 Goosebumps film had its own original narrative.

The first half of Fear Street Part I: 1994 works better than the second, with an infectious fast-paced energy and colorful characters set amidst the nostalgic backdrop of 1994, where the clothes are ridiculous and the songs are moody masterpieces and there’s not a cell phone in sight. Marco Beltrami’s score is at times too similar to Scream (especially during the opening titles) but ultimately gets the job done. And the actors are all natural and well-cast, Madeira and Welch particularly good in this, beautifully bringing to life a tender and effective lesbian romance storyline in the midst of the horror mayhem.

Even the corny dialogue didn’t bother me since so much of the dialogue in R.L. Stine’s work is fairly ridiculous. “She’s been possessing people!” and “It’s not like the movies, okay?” and “did you all go to pound town?” made me cringe, and at one point Deena says to Olivia, “Even though we are in Hell, I feel like I have another chance with you,” the kind of stupid line that can immediately break the spell of an otherwise entertaining horror movie. Stine’s dialogue, however, was always bad and on-the-nose—the man was pumping out two books a month at one point, to be fair—and so lines like “You deliberately tried to ruin my life two years ago. I told you then I’d get even. And now’s my chance” from his 1991 Fear Street book Lights Out makes the dialogue in this new film sound positively Shakespearean.

Unfortunately, the film does fall a bit short when the absurd supernatural plot about a vengeful witch takes over around the hour mark and one of the main characters conveniently knows every detail about what’s happening and gives us an overlong info dump. Worse, the other teenagers don’t even doubt his findings and automatically believe him, as of course any of us would do when told a witch’s curse has grabbed hold of nearby homicidal killers who can’t stay dead. I’m not sure if taking this story far beyond realism was the right call because the sense of dread and, frankly, fear, drains a bit from the film as more and more of the crazy plot takes over. Janiak forgets for a good thirty-minute section to be actually scaring us, and that’s too bad.

Thankfully the horror machine kicks into high gear again in the final act, and the lull from before is long gone as some great action and a couple of genuine surprises lead us toward the shocker cliffhanger ending. I did admire for a movie that is set up from the beginning to be the first in a trilogy that it works pretty well as a stand-alone movie, with only the last scene majorly setting up the second chapter, set at a summer camp in 1978 (the same year as John Carpenter’s horror classic Halloween, which I can’t imagine is a coincidence). This film could have merely felt like one-third of a longer story and yet it never does, giving us a soft sense of closure while also teeing us up for what looks to be a pretty groovy second installment.

For the most part, I had a good time with Fear Street Part 1: 1994, and I think you will, too, especially if you loved Stine’s enjoyable books like I did in the 1990s. Nothing really matches the intensity of the fantastic opening scene with Hawke, whose brief presence gives it an instant Stranger Things vibe, but Janiak gets a lot more right along the way than she gets wrong, and I’m excited to see what she does next with the larger narrative. She captures the period feeling well along with terrific performances from the young cast, a group of talented fresh faces that gives the movie a welcome sense of authenticity. All I hope is that the story moves a little faster and gets a hell of a lot scarier in Part 2 when it drops on Netflix next week.