Movie Review: ‘Fantastic Beasts: Crimes of Grindelwald’ is a solid addition to the Wizarding World Universe 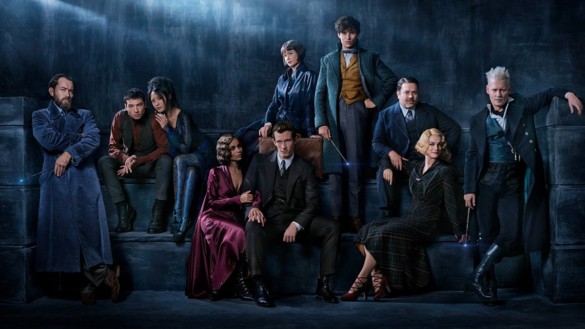 J.K. Rowling has been entertaining millions with her magical world of books and movies for twenty years. Her newest addition, The Fantastic Beasts series, is a more mature and widespread counterpart to the original Harry Potter stories, something that the first film established very well. I’ve always liked the Harry Potter universe but prefer this prequel and its characters more than the first series. I think it does a good job keeping the adult fans, who grew up with Harry Potter, enthralled with the wizarding world.

There’s so much to say about this movie that I don’t know where to begin. It picks up a few months after the end of the first one, set in Europe, lots of new adorable creatures, it’s less of a family film, J.K. Rowling changed things up a bit (probably to make you angry), and it may take a few viewings before you fully understand what’s going on.

The main antagonist, known from the first film, is Gellert Grindelwald (Johnny Depp). I thought Depp was amazing in this film. He doesn’t play an outright villain in a lot of films so I was interested to see what he’d do with Grindelwald’s character. He did not disappoint. He was charismatic and creepy and a perfect bad guy. Depp’s recent “current events” only add to his character’s creep factor, so I’m happy he wasn’t recast.

The returning characters were mostly good. Newt (Eddie Redmayne) is still his loveable, awkward self, and Joshua Shea is a perfect young Newt. It took me a few minutes to realize it was a different actor and not a CG’d younger Eddie Redmayne. Ezra Miller (Credence Barebone) is one of my new favorite actors. I’m very excited to see the combination of Miller and Depp in future films. (They have a total of five planned). I also loved the casting choice of Jude Law, who portrayed an excellent “Youngledore”. The rest of the cast was okay, I was disappointed at the lack of development with Tina, Jacob, and Queenie, and the plethora of random, confusing side characters.

The feel of the movie is dark and foreboding and that is solidified within the first two minutes of the film. The rise of Grindelwald’s character is eerily similar to historical events. The movie has its comedic relief moments (mostly Kowalski) but that dark cloud is always there. Also, I don’t know what version of Ancestry.com J.K. Rowling uses to keep these characters and family histories straight, someone with an advanced degree in genealogy must be involved. This film also includes subtle (and not so subtle) nods to things from the Harry Potter series, so be on the lookout for those.

Side note: Can we talk about how fabulous James Newton Howard’s score is? He took advantage of the addition of Dumbledore and Hogwarts to weave in hints of John Williams score from the original Harry Potter films. Colleen Atwood also does an awesome job with the costumes (I need ALL the shoes), but she has been dressing Johnny Depp for about 30 years so this probably wasn’t a challenge for her.

The movie isn’t perfect. It does throw a ton of information at you in a short time span. It took me an hour or two of deliberation to fully grasp what had happened in the movie. It’s also NOT A KIDS MOVIE. It drives me nuts to see five or six year olds in movies with mature themes or copious amounts of murder. It also had lots of fan-pandering (baby nifflers, I’m not mad) and obvious “meant for 3D” moments. I don’t like it when films have scenes that are awkward unless you’re seeing them in 3D, not everyone likes to see 3D movies. There’s also a huge moment at the end that is upsetting many die hard Potter fans. I won’t give it away, but I am among the people who are not happy about this plot development. I am hoping J.K. Rowling fixes this in later films.

Overall, Fantastic Beasts: Crimes of Grindelwald is a decent addition to J.K. Rowling’s universe. I think I still like the first one more. It’s obviously a bit of a filler film, which some people may not like, but I don’t have a problem with. Definitely will see it again and I’m excited to see how this series plays out and will be impatiently waiting for film number three. I suggest seeing it soon, I don’t know how long the internet can keep its mouth shut on some bombshell spoilers

Hear our podcast review on Episode 300!