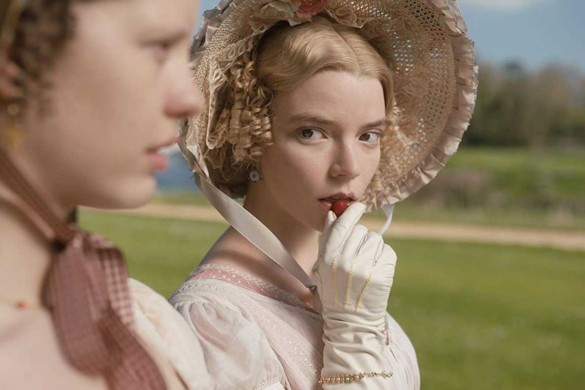 Synopsis: In 1800s England, Emma, a well meaning but selfish young woman meddles in the love lives of her friends.

Jane Austen’s Emma has had several adaptations (both on the small and the big screen) over the years, from the likes of Amy Herckerling’s 1995 film Clueless, to the Gwyneth Paltrow led vehicle in 1996 and even an Indian modern-day adaptation called Aisha. There’s something about this novel and it’s protagonist which people can still relate to despite the novel being first published over 200 years ago. Emma Woodhouse isn’t an easy character to like or even root for, even Austen herself stated that “I am going to take a heroine whom no one but myself will much like.” However, as the narrative develops, you can’t help but fall under Emma’s spell. Even though Emma is a character that was written in the early 1800s, she feels incredibly contemporary as a woman who is headstrong, and very independent in a world where women had no rights and were still considered the property of men.

Autumn de Wilde’s directorial debut is the latest adaptation of Austen’s novel, and looking at Emma you wouldn’t believe that this was de Wilde’s first feature. The film is so exceptionally well crafted and so vividly gorgeous to gaze upon that it will not fail to impress even the most hardened critic. Prior to Emma, de Wilde has worked in photography, learning the craft from her father Jerry de Wilde who is known for this photographs of Jimmi Hendrick among others from the 1960s music scene. It’s clear from Emma, that de Wilde pays close attention to detail and understands the art form that is cinema.

Anya Taylor-Joy stars as the titular character and truly shines here. Taylor-Joy burst onto the scene in Robert Eggers’ The Witch, and continued to impress us with her role in M. Night Shyamalan’s Split and Glass as well as starring in the criminally underseen Thoroughbreds. Here, she is perfectly cast as Emma Woodhouse, a young woman who interferes in the love lives of her friends and peers around her. Emma has no wishes to marry, but sees it as her duty to play the role of matchmaker and her latest quest is to find a suitable husband for her new friend Harriet (Mia Goth).

Her matchmaking is often criticised by George Knightley (Johnny Flynn) a neighbor who is the complete opposite of Emma and is the only one that isn’t afraid to call her out. Aside from matchmaking, Emma also cares for her father (a wonderful Bill Nighy) who is concerned about catching a chill and getting sick. There are also wonderful performances from the rest of the supporting cast such as Miranda Hart as the rather chatty Miss Bates, Josh O’Connor as Mr. Elton (who Emma is keen to set up with Harriet), and Callum Turner as Frank Churchill (the object of Emma’s affections). However, with so many characters involved it can be hard to keep track.

Aside from the excellent performances by the cast, there is much praise for Eleanor Catton’s script which captures the spirit and wit of Austen’s novel. Christopher Blauvelt’s cinematography captures the beauty and soul of the English countryside. However, the real champion of this film is Alexandra Byrne’s costumes which are so stunning that you can’t help but gwap at them in awe. Byrne is best known for her work on several period dramas such as Elizabeth, The Phantom of the Opera, and Mary Queen of Scots, as well as designing the costumes for an array of Marvel films. Byrne’s costume design and the production design by Kave Quinn, art direction by Alice Sutton, set decoration by Stella Fox and all those working in the makeup department, should be praised for creating such an immersive and breathtakingly beautiful world.

Overall, Emma is a highly enjoyable romp and is the perfect way to spend a rainy afternoon. Although, some may find the film’s pacing rather slow, and those who aren’t fans of period dramas may struggle to connect to the film. However, there’s no denying the fact that Emma is one of the most visually impressive films to come along in a long while and with the likes of Little Women and Portrait of a Lady on Fire, the costume period drama is clearly having some sort of renaissance, which is very exciting indeed!