Movie Review (Sundance): ‘Eight for Silver’ is a Tedious Slog of a Monster Horror 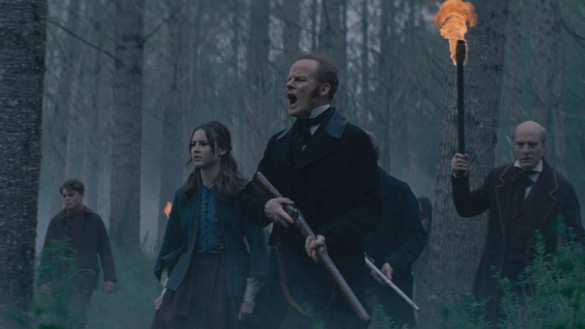 Synopsis: In the late 1800s, a man arrives in a remote country village to investigate an attack by a wild animal but discovers a much deeper, sinister force that has both the manor and the townspeople in its grip.

Eight for Silver appears on the surface to be a suitably fun period monster romp, but there’s very little to keep your attention for any considerable amount of time. Writer-director Sean Ellis follows up his smaller intense dramas Metro Manila and Anthropoid with a staggeringly tedious monster romp set in late nineteenth-century France, clumsily tapping into issues of race and executing horror sequences poorly. When a band of Romani people are murdered in their home by capitalist forces, they place a curse on the surrounding land, causing a monstrous animal to start hunting the surrounding village. Pathologist John McBride (Boyd Holbrook) soon arrives to set things straight, but he can’t save Eight for Silver from being a tiresome watch with little tension or fun, save for a few inventive visuals.

From the outset, the flaws in Ellis’s screenwriting become apparent. An easy way to bore your audience is explaining every thought the characters have and underlining story beats with unnecessary dialogue. In the first handful of scenes, the importance that silver will hold to the narrative is made clear – we see it as large silver bullets held by the inhabitants of a French manor house before discovering its original form, a set of metal teeth coveted by the Roma clan. In both instances, however, the characters tell us explicitly that the silver is important, rather than letting its significance be conveyed through their behavior.

To an audience, this is merely a little annoying, but in other instances, Ellis’s writing choices threaten to undercut the narrative tension. The children from the manor, Charlotte (Amelia Crouch) and Edward (Max Mackintosh) are some of the first to get embroiled in the curse, with Edward being bitten with the teeth and disappearing into the night. But we’ve seen from a clunky framing device that Edward grows up to fight in the trenches at the Somme, so we’re constantly wondering when he’s going to show up again.

On both a large and small scale, the characters of this Gothic horror are disinteresting. McBride arrives seemingly disconnected from the narrative searching for travelers’ communities and has to be roped into the curse situation by another character, a large coincidence as it turns out his family was killed in the aftermath of a similar curse. Smaller characters do their best with inane and pointed dialogue, and while it could be argued that Eight for Silver is using the monster movies of the 30s as a point of reference, so subtle dialogue isn’t too important, Eight for Silver tries to ground itself in a political reality where camp does not belong.

It’s a political reality that is approached with less than stellar results. It’s clear Ellis is interested in the historical suffering of travelers, how capitalism had no qualms with violently disposing of whole communities, the repercussions of which extend to this day. But the argument that the Romani people shouldn’t be brutalized because they might put a horrible curse on us is not quite the incisive social criticism Ellis thinks it is.

The film’s violence doesn’t help this point. While it’s not a problem that Ellis shows a lot of gruesome, explicit violence, his handling of gore is less impressive. The severing of limbs and explosions of blood are framed in a flat, uncreative way that makes it in several instances look comical. The practical effects themselves, however, are at least impressively executed, something that can’t be said for the computer graphics. The monsters are shown as CGI creatures, with overly smooth textures, never feeling like they belong in the scene around them. This is made all the more disappointing when we do see the creatures tangibly, in an autopsy scene that feels like a fun historical spin on John Carpenter’s The Thing. Their design is ghoulish, nasty, and completely inhuman.

This sums up the use of horror in the film – usually flat with fleeting moments that make you wonder about Ellis’ potential in the genre. He seems to understand the language of horror filmmaking, restricting the audience’s view and building a mood with sound, but the film seems incapable of imbuing any scene with emotion. What’s frustrating are the individual images that manage to be effective – a repeated motif of dream sequences conjures a deeply creepy feeling, and the wide shots of mist hovering over long grass are striking. But when sequences that depend on suspense happen without tension or emotional engagement, the result is drawn-out tedium. If Eight for Silver fails as a thematically rich Gothic horror, it could at least have been an entertaining monster flick, but it manages to let the audience down on that count as well.