Movie Review: ‘Echoes of Violence’ is a wobbling but welcomed revenge thriller 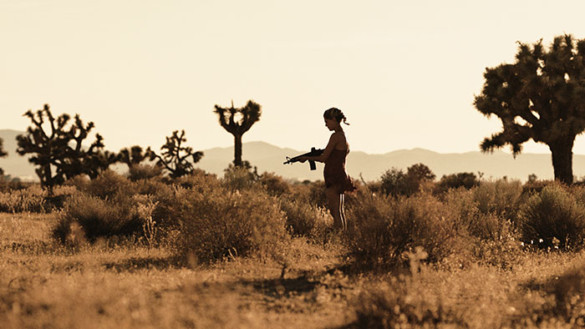 Synopsis: An immigrant travels from Sedona to Los Angeles looking for revenge upon the immigration lawyer who ruined her life.

A woman escaping a network of sex trafficking. A real estate agent in the wrong place at the wrong time. A former marine desperate to get money. These are the unlikely, but somehow effective protagonists of Echoes of Violence, the second feature of American filmmaker Nicholas Woods. The film offers interesting paths to the stories of revenge and redemption that we are now familiar with.

Echoes of Violence starts with Alex (Heston Horwin), a real-estate agent trying to sell an office in the middle of the Sedona desert. Just before a promising meeting, he hears a woman being attacked and goes quickly to her rescue. As we soon learn, Marakya (Michaella Russell) is trying to run away from Anthony (Taylor Flowers), an immigration lawyer / sexual trafficker that sent a goon (Kellin) to kill her. Begrudgingly, Alex agrees to take her to Los Angeles so she can retrieve some money and disappear.

Director and writer Woods offers a promising style in this discreet thriller. He takes startling decisions that offer an air of innovation and unexpectedness to a genre that is familiar. When the audience starts to feel comfortable in guessing what will happen next, it seems as if he knows this, so instead, he changes gears and offers surprising outcomes. For example, it is an agreeable – and unforeseen – choice to focus on Kellin (Chase Cargill) at the start of the second act. Through the exploration of the killer’s life, we understand his psyche and the reasons behind his entanglement with the criminal lawyer. Skillfully, Woods gives nuance and complexity to the previously apparent villain.

He also makes us question our loyalties and expectations regarding the villains and heroes of the story. In this regard, the male characters are well-developed. Both Alex and Kellin have compelling backstories and personalities. Alex – elevated by the nervous and natural performance by Horwin – is the good-natured and reluctant hero that is determined to help Marakya. Meanwhile, Kellin is the broody and complex assassin – but not too cold once we learn about his personal issues – that is at a crossroads when he develops a conscience and starts questioning the actions of his boss.

Nevertheless, this skill is not translated into the development of Marakya, the main character of the film and our supposed main heroine. Thought of as a regular but lethal woman, it is easy to see the inspiration on Quentin Tarantino’s The Bride. She seems to have decided to get vengeance once she realizes that Anthony will not allow her to go free, and with the weight of a past grievance on her shoulders. Still, she is fully dependent on the two men that have become unexpectedly loyal to her and her cause. She is brave but useless. She is cheeky but shallow. Her dialogues tell us one thing, but her actions tell us something completely different.

This critique is the result of the unbalanced script. While it offers excitement, surprises, and intriguing male characters, it fails its female ones. There is too much violence – sexual, physical, and psychological – against women that feels unnecessary and cruel. Markya is a victim of deep trauma for the sake of advancing the story.

Some shortcuts and oversimplification of the story can create exasperation. For example, Markya “is from Africa” as if that continent were a sole place instead of a piece of land formed by independent states with unique and particular histories and communities. This kind of generalizations should not happen anymore.

Despite these details, Echoes of Violence is a memorable effort that is enjoyable and unexpected. Its path to satisfaction is not faultless, but still, it offers enigmatic male characters, subversive reveals, and a satisfying ending.

Movie Review: ‘Ron’s Gone Wrong’ Is One Of The Best Animated Films of the Year

After Disney closed Blue Sky Studios earlier this year, there was a lot of skepticism about whether or... Read More »