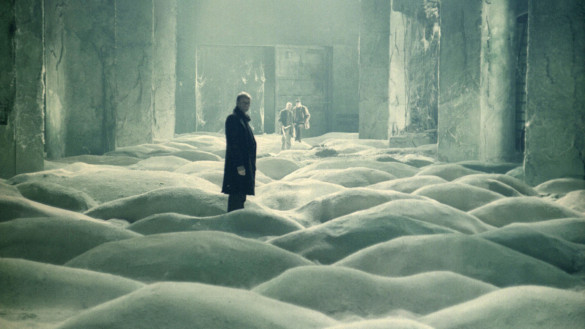 The Stalker’s Wife is the character who has really stuck with me in the aftermath of seeing this film for the first time. She was presented as loving and honest and gentle, even though she couldn’t really afford to be. Those three qualities set her apart from the other lost souls who inhabit the desolate hellscape that they have been forced to inhabit. She is essential to the film’s success, because she provides us with a dash of optimism, amidst all of the doom and gloom. She has managed to hold onto her humanity and still feels emotions like guilt and regret as she talks about why she chose to commit to her husband. This feels like a small, but significant, triumph that only drives home how bleak the rest of this story is. Tarkovsky knows how to introduce levity at just the right times and that means that this becomes easier to take in and digest. It’s not always positive to create a piece of art that is extremely accessible, but in this case, it is something to be grateful for. This is an art movie that was made for the masses and not just a small group of navel-gazing intellectuals.

It’s almost impossible to provide you with a plot description because the film doesn’t have a clear narrative. Tarkovsky sets this ‘story’ in a post-apocalyptic world that has been devastated by environmental disasters. The land is infertile, sparsely populated, and severely underdeveloped. People have to live in poorly constructed shelters and forage around in order to find food. Everybody is fascinated by the idea of entering ‘The Zone’, a dangerous, mostly unexplored area in which people struggle to survive. People choose to explore The Zone because they want to reach ‘The Room’, an area in which all of their desires are meant to be fulfilled. The Stalker (Alexander Kajdanovsky) helps people to reach The Room and puts his own life at risk by doing so. He guides The Writer (Anatoly Solonitsyn) and The Professor (Nikolai Grinko) through The Zone and they are all forced to consider the sacrifices that they are making in order to reach The Room.

This is a film that demands active participation from an audience member. You can’t just sit back, take in the view and begin to think about Tarkovsky’s overall message in the minutes following the film’s ending. It often feels like he is determined to make his films feel like endurance tests. Those long takes can be punishing and they force you to reconsider the same image many times over. It does create something intellectually nourishing, but it also sets you up to feel like the film is a visual assault of sorts. Every new scene has a Where’s Wally? Quality and you find yourself looking out for certain clues in an effort to put the pieces together and figure out the puzzle that he has set up.

His use of locations is what often stood out to me, as Tarkovsky somehow finds a way to make ordinary grassy knolls look sinister. There are times when he chooses to specifically highlight ways in which radiation has damaged this world but it is almost more troubling when the men walk through a landscape that seems vaguely normal. They don’t seem to fit in and Tarkovsky imaginatively comes up with new ways to amplify this feeling. He doesn’t take the Joshua Logan approach to staging scenes, which involves arranging actors as though they are posing for a class photo and then getting them to speak to the camera whilst they are meant to be conversing with each other. Tarkovsky tries to give the actors space to move around and is willing to let them deliver dialogue without appearing to project towards an audience that isn’t there. He tries to give us the sense that we are not part of the world that these men inhabit. They can drift in and out of the frame and we are left to imagine the unspeakable horrors that they might be witnessing. It seems right that we don’t get a sense of the width and breadth of these fields. The Zone is vast and endless, these men could never gather a full understanding of the bigger picture because they always feel the need to forge ahead and avoid dwelling on the past. Tarkovsky broadens our comprehension of their worldview, by limiting the scope of the film.

I was also amazed by the fact that Stalker (1979) contains only seventeen minutes worth of music. When a piece of classic music is played, it leaves a massive impact and the moments where compositions slowly melt away for ambient noise to take their place. You would think that there would be times when the lack of musical accompaniment would become noticeable or feel like a deliberate artistic choice. I’m not so sure that Tarkovsky was trying to make a point by including so little of it in this film. He could have tugged at the heartstrings by including more Bach compositions or he could have featured more of the synthesizer music that features in a few brief scenes. It feels like he was content to rely more on the background noises that could be taken from nature or the happenings on screen. It was nice to avoid dealing with untimely intrusions from an overblown score or far too many scenes that rest too heavily on one piece of music.

This is a film that sets itself apart from the rest for subtle reasons. It doesn’t jump out at you as something that is daring or audacious and you do have to dig a bit deeper in order to properly engage with it. I won’t go as far as Cate Blanchett and state that “Every single frame of the film is burned into my retina.” I’ll say that it was an enriching piece of cinema that vibrated with creativity and passion. I think it could serve as an effective gateway drug for those who are not already interested in arthouse cinema.