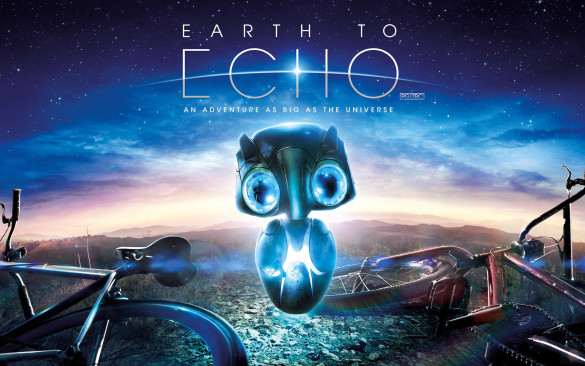 Synopsis: After receiving a bizarre series of encrypted messages, a group of kids embark on an adventure with an alien who needs their help.

DIRECTION
Dave Green’s Earth to Echo makes itself pretty clear that it’s trying to be this generations E.T., which is a standard that’s almost impossible to achieve. The premise is endearing, however, Green’s execution is pretty poor and unfortunate, because there was good potential here. The choice to film this “found footage” style wasn’t too much of a distraction, and actually made sense within the story they wanted to tell. The problem was more the pacing and editing, which was feeble and unfocused. None of the emotional beats it was going for was earned and much of it felt forced. In other words, it gets very campy. However, the visuals were pretty great and almost Transformers-esqu at times. Green uses Google maps and phone technology effectively that was fun to see on screen. Echo himself was also pretty compelling, but in the end it’s more of a lost opportunity.

SCRIPT
The story centers around three kids, Alex, Tuck and Munch, who are three best friends in Nevada, but are being forced to move away from one another due to the government buying their neighborhood to build new roadways. The friends find themselves heartbroken, but Tuck narrates us through their last journey together, a story in which they find an alien whose crash landed on earth. Upon finding the alien, they name him Echo, because of the way he communicates. The kids eventually learn that Echo is wanting their help so he can rebuild his spaceship and go home. Of course, they run into trouble when mysterious construction workers catch up to them, who has been looking for Echo all this time as well. Much of the narrative is unoriginal but you have to give them credit for just going for it. It’s very much a crossover of E.T., Chronicle, a little bit of The Goonies and a little bit of Close Encounters of the Third Kind. And it’s absolutely intentional, in my opinion. All in all, the first five minutes is compelling when we learn that these three kids have to deal with the moving of their closest friends, which is heartbreaking for anyone at that age. And once again, the last five minutes of the film comes back to that premise and how they learn friendship isn’t about proximity. However, everything in between is so muddled, forced and trite, that it doesn’t earn much engagement.

RELATED: How to Train your Dragon 2 Movie Review

PERFORMANCES
Earth to Echo stars three kids that are mostly unknown. Brian ‘Astro’ Bradley as Tuck who narrates the story and has some pretty funny lines throughout the film. Bradley’s performance was easily the best of the trio and there’s some good potential there for him. For Teo Halm, this was his first major credit, and I gotta say, he’s not bad at all. His character’s arc was forced and not written, which is no fault to him. He plays the emotional beats okay enough, but it’s not enough to save the story. Ironically, Reese Hartwig has the most credits of anyone and he is the campiest as well. His character is annoying, which was part of it, but he plays it too over the top. And here I am criticizing a 12-year-old, who am I? Let’s just say they aren’t the best performances we’ve ever seen, but they’re still adorable nonetheless.

SCORE
Joseph Trapanese has put in some great work on the Raid movies, and while this is very different, it’s still very effective and one of the best elements of the film. The music by itself is gorgeous and absolutely worth listening too. Trapanese uses a lot of strings, while going for the one’s in your heart, which is beautifully done. The use of it in the movie enhances the forced melodrama, but it doesn’t make the music less exciting. Good stuff here from Trapanese.

FINAL THOUGHTS
Earth to Echo, while I’ve given it a hard time, will most likely work for kids and young teens. It has some fun sci-fi elements and Echo is adorable, which is really all that matters right? The kids dealing with their friends moving away is something a lot of us can relate to, which is probably what makes the film more disappointing than anything. So Earth to Echo, it’s not that I’m mad at you, I’m just disappointed. Or is that just worse to say? Well, I’ll just say, of the kid-friendly material out there, go see The Lego Movie or How to Train Your Dragon 2.