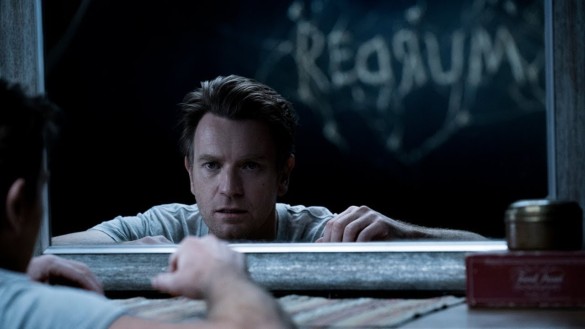 Synopsis: Years following the events of The Shining, a now-adult Dan Torrance meets a young girl with similar powers as he tries to protect her from a cult known as The True Knot who prey on children with powers to remain immortal.

“Dare to go back.” It’s the tag line to director Mike Flanagan’s Doctor Sleep, the sequel to Stephen King’s The Shining But while Doctor Sleep is a sequel to the classic novel, it is also a continuation of the feature film directed by Stanley Kubrick that premiered in 1980. While it is a good line to put on a poster, the line feels more like a challenge to the creative minds around this sequel. The task of making a follow-up to one of the greatest horror properties of all time could drive many crazy. But Flanagan balances everything perfectly, making something fans of the book and the film will be extremely happy. By doing this, he has made one of the biggest surprises of the year while continuing to bring his own gloomy, naturalistic style to the work he is involved with.

Doctor Sleep picks up 30 years after the events at the Overlook Hotel. Danny Torrance (Ewan McGregor), who now goes by Dan, is an alcoholic trying to escape the pain plaguing his life. With flashbacks to Dan’s childhood showing the evolution of his gifts, he’s able to lock up most of demons haunting him. But while he can file those haunting figures away, he still can’t shake his personal fears, including his damaged relationship with his father.

Finally hitting rock bottom, Dan seeks help to turn his life around while living quietly in a small northeastern town. He joins AA, coming to terms with his drinking and how it connected to his shortcomings as well as his father’s sinister fate. He becomes the town’s night orderly at the local hospital, where he helps people who are about to die transition to a peaceful slumber. This is where Dan gets to serve some form of purpose with his gifts by using them as a comforting device for the suffering. By doing this, Dan can find peace within his life and understand his shine is a meaningful blessing. These moments are when Doctor Sleep works the best, where Flanagan slows everything down and amps up the emotion. Through this, Dan is such an interesting complex main character you can root for due to the beautiful humanity and relatability conveyed in McGregor’s performances.

But just as everything is going well, a young girl named Abra (Kyleigh Curran) reaches out to him seeking his help. Abra is just like Dan, she shines and is extremely powerful like him. They communicate a lot throughout the film, friendly conversations before Abra goes to school. But when she gets in trouble, she has no one else to turn to. She comes to him searching for a way to stop Rose (Rebecca Ferguson) and the True Knot, a cult who feeds off other children’s shine. Abra witnessed one of the True Knot’s acts through her shine, thus when Rose feels her presence, Abra knows it won’t be long till she must face off against the cult. Hesitant at first, Dan realizes that he can’t hide his gifts anymore and he joins Abra in the fight to stop the True Knot, leading them to a familiar place full of dark memories.

Doctor Sleep is a dense dance of nostalgic supernatural horror mixed with a deep psychological examination of how we can rise from the sins of the past. Flanagan knows the audience is coming to see something scary, and there are parts that will make you jump, especially in the third act. But this director isn’t interested in those expectations. Instead he’s interested in the trauma and the tole someone’s burdens can have on those around them. By looking at these issues, Dan evolves and inspires Abra to be what he could never be, which is someone that embraces who they are and shines bright for all to see.