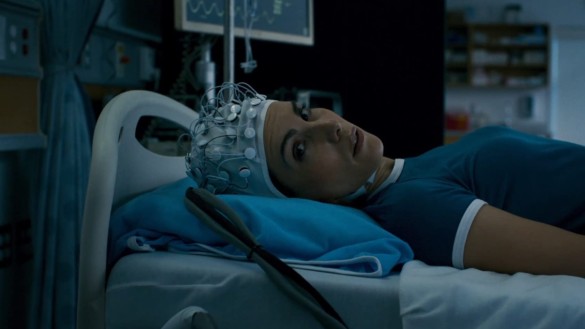 Plot: A young woman unleashes terrifying demons when supernatural forces at the root of a decades old rift between mother and daughter are ruthlessly revealed.

Few filmmakers have exploded onto the scene the way that Neill Blomkamp did with his 2009 feature debut, District 9. Produced by Peter Jackson, the $30 million indie sci-fi grossed a whopping $115 million domestic and $210 million worldwide. Defying historical logic for an indie genre film, it also netted 4 Oscar nominations, including one for Best Picture. This stratospheric initial success was met with a calamitous fall from grace, as the filmmaker faced diminishing returns critically and financially with his follow-ups, 2013’s Elysium and 2015’s Chappie.

With the bloom off the rose, Blomkamp’s prospects began to stall. Despite being tipped for, and at times deep in development on, new additions to iconic Hollywood franchises like Alien and RoboCop (not to mention the development hell of his Halo movie), everything Blomkamp was attached to seemed to fall through in the years after Chappie made his name less of a selling point for audiences and studios. The solution? Like many directors in a rut before him, Blomkamp went back to the drawing board and attempted a more intimate, personal project that would see him return to his indie roots.

Shot in 2020 during the COVID-19 pandemic in British Columbia, Canada, Demonic tells the story of Carly (Carly Pope), a woman who is recruited by a shady organization to use groundbreaking new technology to go inside the mind of her comatose mother, Angela (Nathalie Boltt), whose violent and abusive history has left her estranged from her daughter. The set-up places the film in the same realm as many recent pictures, such as Hereditary and Relic, which have used genre storytelling to explore themes of parental abuse, and the fractured relationships between parents and children who come from households as toxic as this.

While some filmmakers, such as M. Night Shyamalan, were able to go smaller to course correct their career trajectories after a string of failures, this approach for Blomkamp has only served to lay bare the most glaring flaws that have always existed within his work. Thematic heft and character development have never been Blomkamp’s strong suits. His films have excelled in the technological department, the action, and surface-level thrills. With each new film, his weaknesses in story and character became more apparent, more damaging, and Demonic puts those shortcomings front and center.

Demonic is a film whose ideas play like half-baked riffs on a wide array of far better work that’s come before it. Blomkamp, as a storyteller, has struggled from the start with being too derivative, and he has possibly reached his nadir here. The result is a film that is an utter chore to get through. With stilted acting and grueling plot mechanics that promise excitement which never comes, viewers might struggle to even make it to the film’s third act. That would be a blessing for them, as this is where Demonic goes fully off the rails into oblivion.

The one element that allows Demonic to stand out, as a curio if nothing else, is in its unique approach to inserting Carly into Angela’s mind. That aforementioned groundbreaking new technology that is used for this process is portrayed via a patent-pending method of volumetric capture, which is a form of three-dimensional video tech that turns actors into geometric objects. Demonic uses this technique to an extent never before seen on film, adding a fascinating allure to the scenes inside Angela’s mind.

Due to the fact that Blomkamp is using real-world technology here, and not mapping things out with CGI to make the effects look as sophisticated as the latest Marvel blockbuster, these sequences have an odd feel that appears almost dated in a strange way. You get the impression that you’re watching something from the ‘90s in terms of the quality of the images, yet it’s actually more era-appropriate for what people are doing in the real world as we speak. It’s certainly the only thing worth discussing about Demonic, but it also leaves viewers wondering whether experimenting with this equipment was the entire reason that Blomkamp wanted to make the film.