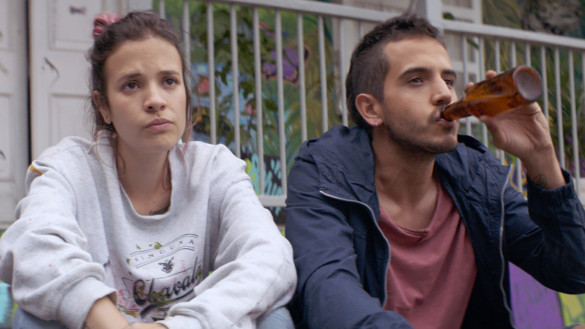 Synopsis: Cristina and Simon are two young graffii artists who paint the city that they live in: Medellín. They defy a criminal gang when they decide to paint over a threat, written in a wall, a mural of a whale. The powerful strength of youth, faces fear, violence and the many risks of growing up.

In the first twenty minutes of Days of the Whale, an accomplished and colorful debut by Colombian filmmaker Catalina Arroyave Restrepo, a side character remarks that “Art is transgressive.” They’re in a circle of youthful graffiti artists, who are discussing if they should release a controversial work that’s bound to piss off local gangs. Whispers about bodies found in soccer fields punctuate the conversation. Behind them are striking works of graffiti, still coloring the scene in a positive light. It’s an apt summation of the film’s central juxtaposition: this is a vivid, gripping community portrait, with something darker hiding in the background.

The first people we meet are Christina (Laura Tobón Ochoa) and Simon (David Escallón Orrego), a pair of rebellious lovers stuck in Medellin, Colombia. Christina is supposed to be attending university and preparing for a possible future in Spain, but spends most of her time hanging out with Simon. They spend most of their time at their art collective, hanging out with fellow creatives, and feeling trepidation for a distant future. In the movie’s opening scene, we see the two playfully debate a stray dog, and decide upon adopting it together, before bringing it to their collective’s headquarters. It’s the sort of anecdotal moment that makes this movie stand above it’s peers.

Director Catalina Arroyave Restrepo brings a light feel to Days of the Whale. It runs a tight eighty minutes, and still finds time for lovely tangents and world building. Part of that is thanks to Restrepo’s dry directorial style, which isn’t hyper-stylized, but confidently done. Throughout the film, the camera stays foregrounded in the dramatic situations, while the vibrancy and excitement of the art peaks from behind. During the occasional montage, that excitement gets brought out front, letting latin-pop/rock from the soundtrack anchor the joy of creating art. When the film is dealing with it’s hefty drama, the camera always holds close on characters, like during an early uncomfortable discussion where Christina bickers with her dad’s new wife.

Those interactions aren’t uncommon throughout the film. While Christina lives with her dad, the discomfort between them is palpable, nearing impossible to miss. Christina’s mom is a journalist that moved to Spain to avoid the possible dangers of Colombian gangs, and while the two seem close, she also seems hesitant to pack up and join her in Europe. The film quite expertly captures that feeling of boundlessness in the first act, but also lets the crushing frustrations of reality slip in. Simon lives with his grandma, who supports him, but laments that “[he] shouldn’t be out all the time.” Often, it feels like the adults in Simon and Christina’s lives are only there to add tension or frustration, which inevitably make those scenes less absorbing then the fly-on-the-wall amusement of the art scenes. Despite those drier sections, the entire movie rests on the shoulders of Laura Tobón Ochoa. She often shows nervousness and eagerness in one expression. If there’s a single reason to see Days of the Whale, it’s for her performance.