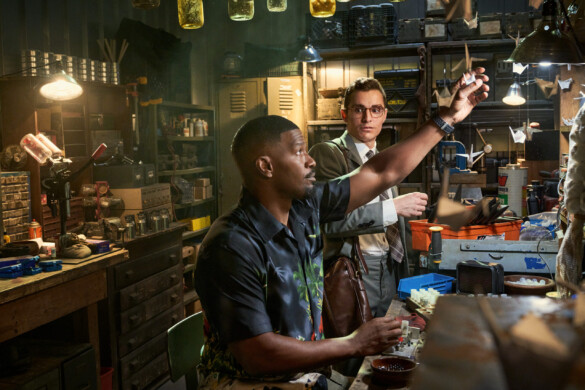 Synopsis: A hard-working, blue-collar dad who just wants to provide a good life for his quick-witted 8-year-old daughter. His mundane San Fernando Valley pool cleaning job is a front for his real source of income: hunting and killing vampires.

Most of Day Shift’s jokes don’t land, and it is creaky and clunky during its entire runtime. However, its B-movie charms, Robert Rodriguez-ish directorial decisions, and self-aware shoddiness make it a slightly entertaining feature.

Vampires have been a significant part of society’s culture, whether through literature or film. At least in the latter case, they have been around since almost the beginning of it all; from the silent classics like Nosferatu (1922) and Vampyr (1932) to the 80s cult hits Near Dark and The Lost Boys (both released in 1987), these monstrous creatures have sparked the interest of many, and made their way onto the high standings in the horror genre. Although there have been many directions and styles in which the films are made about vampiric beings, I have always been interested in the ways in which Grindhouse pictures and B-movies implement them. Of course, some of the primary examples are Mario Bava’s revisionist Planet of the Vampires, Paul Morrissey’s Blood for Dracula, and Vampyros Lesbos, but the one that has caught people’s eyes the most is Robert Rodriguez’s From Dusk Till Dawn. And although I’m not the biggest fan of said film, I must admit that it inspired plenty of people to create more “haphazard” action vampire pictures.

With this comes J.J. Perry’s Day Shift, brought to us by Netflix. Knowing that it comes from the streaming service powerhouse, although their subscriber numbers are plummeting by the millions in the past few months, it leaves me with some doubt if this will be any good. The reason why I have that sentiment in mind is that most of their Hollywood A-lister pictures (not helmed by a proper director or filmmaker) are disposable. These movies fit the streaming platform, but they don’t leave any spark on you while watching – making them highly forgettable. Nonetheless, there was some excitement on my part because it is an action vampire movie, which, if done correctly, could derive some entertainment. And Day Shift does have sparks of entertainment and some directorial techniques that remind me of some of the aforementioned films, but, in the end, these end up being hollow. It is a strident feature, with a primarily unfunny script, that even its B-movie trappings can’t elevate to higher ground.

Day Shift is set in Los Angeles, where a vampire hunter named Bud Jablonski (Jamie Foxx) is working day and night killing creatures and snatching their fangs to sell them. Who would want those fangs? What is their use? None of that is explained thoroughly, but it sure makes Bud a lot of money, depending on the rarity and age of the vampire subspecies they are from. He has a daughter, Paige (Zion Broadnax), who means the world to him and his ex-wife, Jocelyn (Meagan Good). However, they are short on cash to pay for their kid’s tuition and braces. If Bud doesn’t find the money in seven days, her daughter and ex-wife will move to Florida to live with Paige’s grandma. With no other option, Bud reaches out to his buddy at the vampire union, Big John (Snoop Dogg), to get a couple of hit jobs to secure easy cash. Unfortunately, things start to go south once he crosses paths with Audrey (Karla Souza), a head vampire who plans to take over the valley.

J.J. Perry’s approach to Day Shift is mainly focused on presenting it as a B-movie from the late 90s and early 2000s, where the narrative doesn’t make much sense on its own, but its horror-action combination enthralls because of its self-aware shoddy charms. Some of its action sequences and other takes are inspired, style-wise, by the works of Robert Rodriguez; like Planet Terror, Desperado, and Machete, yet without the total collision of hyper-violent exaggeration and control of intensity. But, of course, J.J. Perry is no Rodriguez. Still, he tries his best to emulate that Grindhouse-esque vision and the directorial panderings of the filmmakers from that subsection in cinema’s history by also adding some dashes of Blaxploitation, primarily taking notice of Bill Gunn’s cult-classic Ganja & Hess and Spike Lee’s 2015 remake of said movie, Da Sweet Blood of Jesus. Although it contains those wonky charms to some extent, this high-priced gloss covers the entire picture due to its 100-million-dollar budget. There are two specific reasons why this holds the movie back from its engagement factor potential.

First, that high-budgeted veneer causes those B-movie aesthetics to lose their griminess and rough-around-the-edges yet entertaining bonkers energy. The film begins with an action scene that leaves more to be desired, a self-aware untidy fight scene with terrible remarks and visual effects (which remain a big problem for its last act) that I actually enjoyed, even with its faults. I was going with it; however, as it transgresses, it keeps dwelling in a more generic, albeit nonsensical, side that slowly eliminates what I found interesting and amusing in the first place. It also makes me reminisce about the good old days of using practical effects as these creatures have no tactility. And to be completely honest, even though he is not the best rapper-turned-actor in the world, Day Shift would have benefited from more Snoop Dogg scenes. The movie would have been vastly improved if its central pairing was him and Jamie Foxx instead of adding Dave Franco, who is doing the same smart playing bumbly stupid performance as the latter’s companion.

Second, despite that gloss, Day Shift doesn’t look like it is worth nearly that much. So, the question now stands – where did the money go? Its action sequences mostly revolve around small closed settings, with the exception of an unneeded car chase, and none of them have that moment in which the viewer says, “that looks expensive”. Those B-movies achieve more with less because of restraint, either by monetary reasons or producers knocking on their door – the legend Roger Corman comes to mind since he’s known for “holding back” filmmakers, so they go through the directing learning process. And Netflix keeps showering filmmakers with big budgets who haven’t made a film of that size, hurting their chances of success because they don’t know exactly what to do. Ridley Scott once stated that it is for the best of the filmmaker to start off with smaller budgets and keep crawling up the ladder, eventually reaching that triple-million digit, which J.J. Perry hasn’t done. Nonetheless, Day Shift arrives and quickly flies by your mind a couple of hours after watching. Is it a total disaster? No, there are plenty of entertaining scenes and somewhat funny jokes. However, it truly is disposable, like most of Netflix’s original movies.