Movie Review: ‘Cyrano’ Cuts Off Its Nose to Show Us Its Big, Beautiful Heart 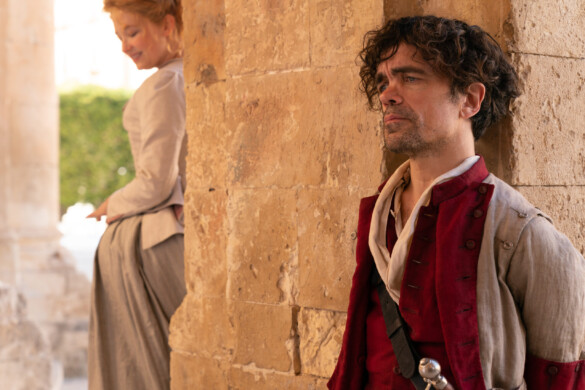 The original play Cyrano de Bergerac is so ingrained in the public mind that it’s likely lost a little potency because we’ve seen so many different interpretations of the work. Plus, in most direct parodies or adaptations, the main character wears a gigantic fake nose, which can remove the depth of the ache of Cyrano’s longings. With the film Cyrano, there is a rebirth of the material.

In adapting Cyrano de Bergerac first for the stage and then for the film, Erica Schmidt not only updated the language, but she added a lot more heft to the character of Roxanne. No longer is Roxanne (Haley Bennett) only an idol to be worshiped, a prize to be won, or a token to symbolize the ideal woman. Under Schmidt’s pen she becomes a woman who steers her own destiny, who may be a romantic, but is not a fool. She feels like she has much more depth and it helps that she’s not objectified by the gaze of the camera either.

This is where Joe Wright’s talents lie as a director. He is able to convey Roxanne’s transformation in agency by creating an appealing, but not objectifying visual language for us. Working with cinematographer Seamus McGarvey and editor Valerio Bonelli, Wright crafted a scene in which he showed us the arousal of Roxanne reading one of her letters. The scene has all of the key shots of what would be conveyed in a typical sex scene with Roxanne moving sensually on her bed, gripping the mattress, touching the letter to her coyly exposed flesh, and parting her lips with each deep breath. It’s astonishing how well it works and serves as the template for the montage of Christian and Roxanne reading each letter and the two bodies separated by space, brought together by their passionate imaginations.

Though, of course, at the heart of the piece is Peter Dinklage who takes on the role of Cyrano with a tremendous amount of gusto. His performance transcends the material, not only because he’s utterly, magnificently, the dashing, debonair, soulful hero, but because without the fake nose to get in the way, his heartbreak is so very plain on his face. He’s able to bring out the agony of longing in a way that pales every other adaptation. His eyes, like bottomless pits of yearning, draw us to him and speak of all of our remembered, painful unrequited loves. Even his sonorous baritone seems to shake the tears from our eyes with its sorrowful rumble.

The music for Cyrano is written by Aaron and Bryce Dessner, members of the sad, dad rock band, The National and they deliver the aching lyrics the band is known for. It is easy to forget that Cyrano is a musical, as the songs come far apart and when someone starts to sing-talk it’s a nice little reminder that they exist. Not to say that the songs aren’t wonderful, which they are and beautifully sung, for the most part, but it is a little jarring at times. It’s like if you were seated across from your significant other as they break up with you and suddenly the waiter makes eye contact, the music swells, and the restaurant sings your feelings. So, kind of odd at first, but a little magical and emotionally fulfilling by the end.

Film is a collaborative art form that needs a sort of hive mind to function and there are some films where everything clicks very much into place. Cyrano is the type of film that can whisk you out of the seat, out of the theater, and into a world of beautiful romance. It’s true you may tumble back to Earth when snide Ben Mendolsohn is suddenly growling and strutting through his villainous song, but by the second verse, you’re pulled back in and see him as the worst of the worst and the grim reaper presiding over the lovers you’ve come to cherish. Cyrano is a heart-aching joy to watch.