Movie Review: Heart, soul, and legacy are on the line in ‘Creed II’ 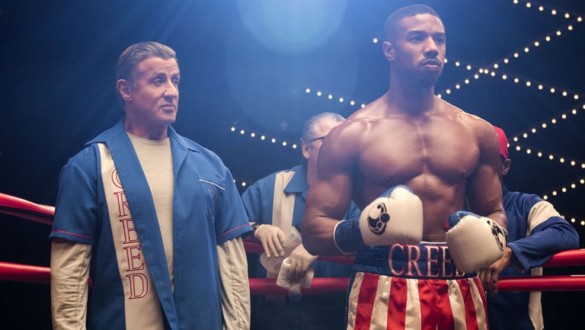 Creed II, a herculean task brilliantly and masterfully crafted by Steven Caple Jr. and an incredible cast, is as much a sequel to Creed as it is to Rocky IV. The difficulty here is not the alienation of Creed fans, although Ryan Coogler’s surprise 2015 hit left a new generation wanting and expecting the same heart, soul, and fight; the real challenge comes when trying to satisfy entrenched Rocky franchise fans. Not only must the filmmakers add to Adonis Johnson’s (Michael B. Jordan) own legacy as set forth in Creed, they also decided to bear the weight of one of the most popular installments of the Rocky series, Rocky IV. This compounds the drama and increases the stakes as personal and professional adversity stalks every character that graces the screen. How will it all play out? The answer is blatantly obvious, as this is after all a Rocky-styled formula. However, Mr. Caple Jr. manages to sneak in a few surprises that hit the audience in all the soft spots, thus creating a deeper, more intriguing look into the hearts and souls of characters both young and old.

Adonis Johnson has embraced the Creed name. He has accepted his father, the late Apollo Creed’s, legacy and is hellbent on igniting his own. After a brief but defining fight, Adonis becomes the new Light-Heavyweight Champion of the World and does so on his own terms. However, a new opponent emerges, the raw and stoic Viktor Drago (Florian Munteanu) who is trained by his father, Ivan Drago (Dolph Lundgren). The name Drago should instill both nostalgia and fear in the minds of Rocky fans, as Ivan Drago is responsible for the death of Adonis’ father, Apollo, as seen in Rocky IV. So, caught between continuing his own story and fighting for his father’s legacy, Adonis steps into the ring with Viktor and the results are catastrophic. His journey back is littered with ups and downs that try his soul and push him to be a better person, not just a better man. Aiding him along the way is his mentor, Rocky Balboa (Sylvester Stallone), whose character continues to grow, despite being introduced over forty years ago. Rocky, speaking from experience and tragedy, pleads with Adonis not to take the bait and fight Viktor. Having held Apollo in his arms as he passed has always been a burden of guilt that Rocky has had to carry for decades. Creed II delicately pulls the curtain back on the events that followed the over-the-top 80s-era Rocky IV. We see the broken man that Ivan Drago has become and understand that his loss was greater than the results of a boxing match three decades ago. Having seen that fight through star-spangled glasses, American audiences were treated to a perceived winning of the cold war, but in the fictional filmic world of the Rocky franchise, Ivan Drago lost everything. Now, his son is the heir-apparent to Russian boxing, and Ivan selfishly sees Viktor as his ticket back to the table.

Adonis, newly engaged to Bianca (Tessa Thompson) as well as being a new father, must step out of the shadow of his own father and decide how he wants his legacy to play out. With the help of Rocky, his mother, and Bianca can he summon the heart, soul, and fight required to vanquish his enemy? Well, if you’ve seen a Rocky movie before, I assume you know the answer. And herein lies the trouble with Creed II. We’ve seen this story play out numerous times. If you are a fan of this franchise, you expect certain results. I believe that the filmmakers gleefully play with this assumption. This allows them a bit of slack when molding the characters and building on their development. Granted, on the surface Creed II is another boxing film where the title character must face his own adversity to win in the ring. But I would argue that Creed II is slightly more than that. It is a film about legacy and redemption. It is a film about fathers and sons. It is a film about soul and spirit overcoming hate and revenge. Adonis’ decisions become his own, whereas Viktor’s decisions are those of his father. The dynamic between the two father and son duos mirror one another. Apollo’s hubris is what got him killed, and if Adonis does not wish to follow his father to the grave, he must fight for himself and not his father’s legacy. On the other side, Viktor must realize that his father is using him to regain his own legacy, even if it means Viktor might have his legacy ended before it begins. This leads the audience to a third father-son relationship, that of Rocky and his son Robert. As Rocky witnesses the power struggle between fathers and sons in the film, he steps back and wonders what he can do to repair his relationship with his estranged son.

Yes, Creed II is a boxing film. Yes, it is a story that we have seen played out at least seven previous times. But there is so much more under the surface, and that is where Creed II shines. It shines in the brilliant development of flawed characters. It shines in the performances of talented actors (Jordan and Thompson are immensely charismatic). It shines a light into that which is dark and exposes these characters as human beings who struggle with the challenges set forth before them. Overall, Creed II is a more than adequate follow-up to 2015’s Creed, but even more than that it works extremely well as a compendium to Rocky IV. Navigating the nostalgia and reverence for Rocky IV, Creed II walks the tightrope and rarely falters.

Hear our podcast review on Episode 302!