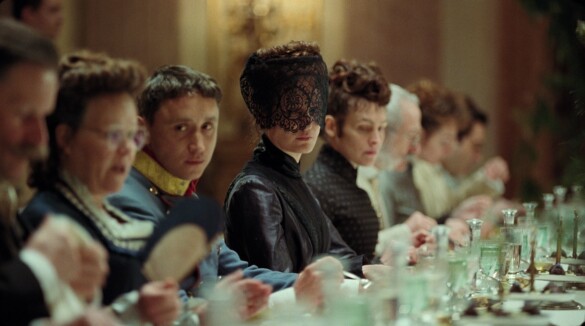 Synopsis: A fictional account of one year in the life of Empress Elisabeth of Austria. On Christmas Eve 1877, Elisabeth, once idolized for her beauty, turns 40 and is officially deemed an old woman; she starts trying to maintain her public image.

Biopics on revered, infamous royal figures run the risk of being bland, banal entries into historical lore. They can be heavy, impersonal, and have an air of mugginess that leaves you gasping for freshness. Their stale opulence and privilege seep into the fabric of the film, as we’re meant to feel sorry for these people whose power over their subjects is taken as gospel. It was apparent in Todd Hooper’s Best Picture winning The King’s Speech and Stephen Frears’ The Queen in which they took the road most travelled for their stories. In Corsage, Marie Kreutzer breathes life into a film that circumvents royal tropes in a restrained but tangibly brazen half-truth biopic of infamous Austrian Empress Elisabeth Eugenie – portrayed with the inflammatory despondence of an angry asp by an excellent, magnetic Vicky Krieps.

Corsage isn’t a completely new entry in the sub-genre of tumultuous royal breaking apart under their respective monarchies. As recently as 2021, Pablo Larrain’s wonderful ‘fable from a true tragedy’ Spencer reimagined Princess Diana Spencer as a tragic figure stuck in the cyclical appeasement of the royal family. The Sofia Coppola directed Marie Antoinette  also avoided the stuffy pitfalls that befall royal stories by populating itself with contemporary anachronisms. Corsage achieves this circumvention in a similar way by soundtracking itself with modern pop in a dichotomy that spreads this story through to present-day. In this way, Kreutzer bridges the gap between classic and modern with this story of female constriction, self-destruction, and rage against the patriarchy that continues to be relevant; all traits that aren’t permitted for a woman whose public perception as a stable, put together Empress is pivotal to husband Emperor Franz Joseph (Florian Teichtmeister) and his ongoing war.

Being ‘put together’, however, is far from Sissi’s mind. Having just reached 40 – the average life expectancy for a woman in 1878 – she is breaking apart under the weight of her fabricated life. Her life, one of corsets tightly bound, beards glued on to her loveless spouse, and purple boxes whose chocolate treasure is treated as a faux healing balm to the wounded, is performative and it eats the depressive Sisi alive. She wants nothing more than to be seen authentically, and desired. Like a cat vying for attention, it’s always at her behest and she’s more than willing to throw people away when done with them. “I enjoy watching you looking at me” Sissi tells a lover before discarding them. She invokes her power and sexuality to seduce, fakes accidents, faints for attention and forces staff to time her on how long she can be submerged in a bath before she drowns. She even injects heroin to alleviate the boredom and depression that being perceived and desired bring her – the very things she both craves and detests. She is obsessed with wanting to be loved, to be treated as the icon Austria sees her as, to have herself validated by everyone around her and yet, she can’t arouse the husband who parades her as a trophy. A failure, for a woman who craves control and freedom. Freedom is a key element to Corsage. Her husband, mockingly referred to in her friendship group as FJ, tells her she can do whatever she wants outside of the public eye. He has what he wants in the form of a male heir, Rudolf (Aaron Friesz), and desires not the feisty, manic depressed Sissi. He tells her, after she spends months away, that he will see her later, his stiff upper lip pouting at her return. But, in a society that forbids showing weakness in the monarchy, she has to fake it, and not let this show to anyone outside her tight-knit friendship group. Freedom, in a patriarchal society? Not so much.

Kreutzer opens up her toy box with Corsage and is having icy fun reimagining the life of the Empress. The screenplay is full of sharp dialogue and Kreutzer’s work here on self-concept, image and perception is highlighted so well by the introduction of Louis LePrince (Finnegan Oldfield), who shows Sissi a movie camera. The camera captures her in a way she describes as objective, in a way that she can only fathom at this point in history. During this sequence, she asks LePrince if the device can hear her. Of course, this is not the case as it is described as a “wonderful idea, but impossible”. She uses this as cathartic release, screaming into the void of being caught objectively on camera with ambiguous audio, letting herself be her authentic incandescent self in front of the lens. These moving pictures, of which she imitates as nonchalant doodles of her suicidal tendencies, are imperative to Sissi’s desire to be captured and seen as a real person, not in the fake persona she is forced to employ or in a painting that she self describes as getting her late child’s complexion wrong.

Kreutzer, who also wrote the script, directs this with cold, calm rigidity. It means that the film is as frosty as the protagonist’s loveless marriage, but it manages to be achingly compelling by its ability to constantly upend the status quo of familiar tropes. It means this fantastic film is never far away from something surprisingly caustic, whether it be a reveal of Krieps’ naked body seducing for attention or the distraught idea that her young child indoctrinated by the monarchy prefers the fake version of Sisi that is on show to the public.

Corsage, a film filled with engaging concepts and ideas, may take its time but between its fantastic period production and costume design, Kreutzer’s sharp dialogue and Krieps’ terrifically raw, distinguished portrayal of Empress Sisi as an obsessive anti-heroine sick of her life, it’s a film that demands your attention. A devilishly entertaining, tangibly textured, provocative film on a self-destructive woman hellbent on not conforming to societal strictures.