Movie Review: Pixar is back in top form with ‘Coco’ 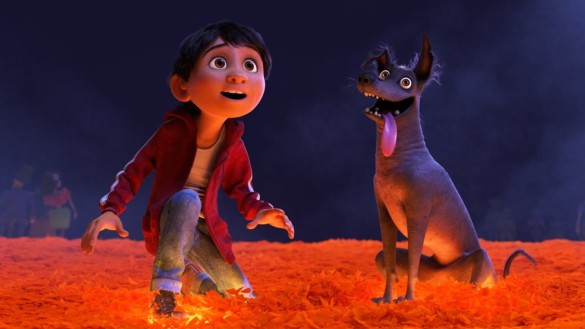 Synopsis: Aspiring musician Miguel, confronted with his family’s ancestral ban on music, enters the Land of the Dead to work out the mystery.

Spectre said “The dead are alive,” and that’s certainly true when the audacious (and imagined) Dia de los Muertos parade is on screen. Afterward it’s only steady givings for a living viewer to spirit away since those who were supposed to have  – and have gone  – from James Bond’s past, while referencing the provocative phrase, spook the spy with a wheezing boo. There should be a petition for a cut where everyone is in their calavera costumes? That would have been worth the while.

With Coco, this little dream can be considered as realized although Pixar-ized. Here, the dead are more than just alive; they are festive, hyperkinetic, masters of crooning, sensitive, educative and – as it happened at this writer’s screening in Houston – able to get the whole house roaring.

In the film, joyful 12-year-old Miguel (Anthony Gonzalez) is framed as a musician-in-bloom in a clan who considers music a curse, whose every rebellious act denotes an admiration for, and later on a need to prove his kinship to, Ernesto de la Cruz (Benjamin Bratt), a singing phenomenon who was not saved by the bell. Expectedly, the struggle reaches a tipping point, and afterward Miguel is vaulted into the Land of the Dead. Departed relatives are there to greet him, so that’s nice, but staying with them any longer and Miguel will become a skellington. As told by Miguel’s roguish friend and regular Frida Kahlo impersonator Héctor (Gael García Bernal), if his living relatives are to forget him, he will move on to a realm unknown as marigold-colored dust. No need to declare anything. No need to cross any Flower Bridge.

“This looks like 2014’s The Book of Life,” said the elephant in the room. True, again the Mexican holiday is the setting, the protagonist has suppressed dreams, and the footage has a propensity to be melodic, but Coco doesn’t rip off what Fox did here. Don’t let the irrational outrage diminishes the facts that Pixar’s work is again proving that Dia de los Muertos is more than production value, and the kind of love being explored here is more transcendent, more introspective, and more familial. As a result, the script from Adrian Molina and Matthew Aldrich (from a story by them and Jason Katz and Lee Unkrich, who also directs) does a wondrous thing: letting the ebullience of a single culture to tell, and coexist, with the universal ideas of mortality and memory. Oceans, superheroes, ants, toys, a Parisian kitchen, a brain and now all the way to the Mexican afterlife, it seems like no universe is too daunting for the Luxo Jr.-branded animators to perform a thorough and superlative exploration.

Well, maybe not mythical Scotland. Or that second visit to autopia.

But even Pixar’s rainiest of days still offer frames of sunlight with notable evolution in animation, lighting and attempts to replicate the behaviors of an actual camera. Coco is the studio’s most cinematic film to date – at least prior to Brad Bird’s The Incredibles 2, maybe – with tangible textures (those bones!), soft-focusing, and goosebumps-inducing angles that rival a tentpole production (from a competent director). And even more incredible still is having this attribute match up with the film’s mainly samba-like pace, rapid in the doling-outs of story beats, gags from Dante (Miguel’s loose-lingua canine), and new delightful sights. It’s as if every aspect is catered to the heart-thrumming and swoon-worthy scoring from Michael Giacchino.

Don’t worry – beneath the maracas and trills Coco doesn’t forget its characters. Placing Gonzalez, Bernal, Bratt, Renée Victor (as Miguel’s stringent, flip-flop twirling Abuelita) and Alanna Ubach (as the fiery, fiercely independent Mamá Imelda) in more of those entrancing, well-staged moments would have been nice, but for those snappier times everyone remains on beat. Earned tears will be drawn, both of joy and of the more common variant.

Due to its release date, Coco is a Thanksgiving film in the U.S., but that isn’t as awkward as it sounds. If reunion, connection and appreciation isn’t happening over turkey, perhaps go see this. While the youngsters can enjoy the great animation, adults should take home the idea that emotion is the only graspable and usable item in the subsequent plane.  And so, there should be something to remember here – if not what you have just seen then it is a look at those whose living form is now a mind-bound specter.