Movie Review: ‘Close’ is a Beautiful and Striking Tear-jerker 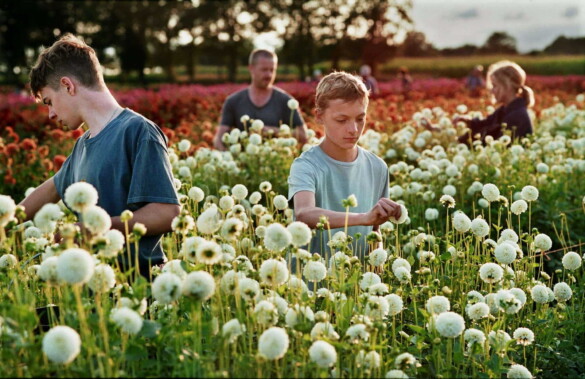 Synopsis: The intense friendship between two thirteen-year old boys Leo and Remi suddenly gets disrupted. Struggling to understand what has happened, Léo approaches Sophie, Rémi’s mother. “Close” is a film about friendship and responsibilit

Thanks to its humanistic portrayal and ravishing performances by its cast (particularly Eden Dambrine and Émilie Dequenne), Lukas Dhont’s sophomore feature, Close, is one of the most emotionally moving films of the year – a beautiful and striking portrait of processing grief at a young age and the toxic masculinity of today’s society.

Friendship is a complicated thing to comprehend and understand, often intertwined with loss. It is one of those things that we are just not ever going to get the hang of it in its totality. As you age, you gain more maturity concerning the people close to you. Still, there are those moments when that bond fractures. It might be resolved with a conversation – the bandage to cover a wounded heart – or maybe ruptured entirely. We saw this earlier this year in Martin McDonagh’s The Banshees of Inisherin . The British-Irish filmmaker explored the melancholy of a relationship between two life-long friends and intertwined it with the Irish Civil War – brother versus brother, friend versus friend. The confrontations offshore the fictional island are juxtaposed with the deterioration of their bond, loneliness eating them alive on the inside as they navigate existential importance. However, it isn’t the only film to be released this year that explores how quickly bonds can break and the aftermath that happens after.

The other film that dissects similar themes is Lukas Dhont’s latest, the Grand Prix-winning Close, but there’s a twist. While McDonagh focuses on men in their middle age, Dhont’s center of attention is on childhood innocence. When you are young, these relationships can be broken faster and hurt deeper because you don’t know much about the world – mental states, how your words and actions affect the people next to you. Along with the pantheon of films released about leaving childhood behind (coming of age via various methods) comes Close, an emotional wallop of a movie that plays with your heartstrings at every moment without feeling manipulative. Its title refers to the bond between two thirteen-year-old boys, Léo (Emilie Dequenne) and Rémi (Gustav De Waele). They are best friends – a connection that can only be seen during childhood. It opens up with the two playing a game of pretend, where they are holding off incoming enemies.

One of the first images you see is the two running through a field of beautiful flowers, blooming while they frolic through the fields of innocence. A beautiful sight to behold; it immediately makes the viewer remember similar days when nothing mattered, and there were no worries. All you were looking forward to was being with your best friend for the entire day and playing. The nostalgia caused by those initial moments is fully effective, but it doesn’t prepare you for what comes next in the story. That happiness will not last forever; it is too good to be true. And knowing about the growing pains of today, we all know what may happen throughout Close’s runtime will break our hearts. School is starting, and the younglings begin their day by doing bicycle races to get there. Because Léo and Rémi are so close and affectionate with each other, they are met with an adversary as their classmates question their relationship. They tease them as if they were a couple.

Because he doesn’t know how to respond to such teasing, Léo slowly distances himself from Rémi and the rumors surrounding their bond. What Dhont does that might have broken the film right from the start is not demonize the classmates. Aside from the initial teasing with a homophobic fringe, there are no bullies in the movie. However, the Belgian filmmaker showcases how those implications put pressure on the two best friends, eventually causing a rupture in their life-long attachment. As time passes, they see each other less and less, to the point of no communication or eye glances. And, when you least expect it, tragedy initiates the second act – a humanistic and heart-rending moment that will surely make many  shed tears. What began as a film about two people who could not be separated from each other no matter the cause, ends up as a reflection of grief and societal norms of conformity imposed onto the youth.

Close may contain some expected narrative beats, but what’s great about Lukas Dhont’s sophomore feature is how effective and humanistic his approach is to the story. The process of grief is handled in ways that aren’t predictable, replacing usual screaming matches and crying scenes for quiet ones that make you ponder about the pain eating Léo alive on the inside and his unwillingness to go through the stages of loss. That’s why it is way more effective than most stories tackling these topics. The quietness of not processing grief properly fills one’s heart with tears of sorrow, which can cause it to implode sooner rather than later. In a way, it reminded me of the song “Introducing Angels”, from Destroyer’s underrated record, ‘Trouble in Dreams’. Singer Dan Bejar often repeats in the song “Common scars brought us together”, followed by “beneath the light of the moon, it’s not too soon / flower girls stalks the groom”. Those lines refer to the uniting power of tragedy, which is a key factor in the last couple of scenes in Close.

In addition to the long-lasting grief process, Dhont explores how toxic masculinity is being smeared onto the lives of these young kids, Léo eventually using ice hockey to forget about the pain. However, his constant falls and failures are part of him knowing that he’s doing that just to fit in rather than enjoying it. Everything is turning into a blur, but Léo doesn’t want to acknowledge it, keeping his head high and ignoring his feelings to conceive with the notion that “boys don’t cry”. His classmates are projecting their own insecurities, fears, and diffidence onto the intimate relationship between Léo and Rémi. Dhont paints a portrait of today’s society to open the viewer’s eyes concerning the youth. Seeing the recent anti-LGBTQ+ laws that have manifested in different countries gives this film more impact, importance, and multiple melancholic layers filled with dread and desolation. By the time Close reaches its end, you have wept over a dozen times; your heart is filled with sadness over the reminiscence of past relationships and the striking depictions of the world we live in today.

Lukas Dhont is becoming a force to be reckoned with, as with each feature he grows – his work feels more mature and personal as it continues to work. His filmography may be just starting to be forged, but Dhont’s cinema is powerful and emotionally moving, more so than most filmmakers working today.