Movie Review: ‘A Piece of Sky’ is a Beautiful Depiction of Illness Affecting Relationships 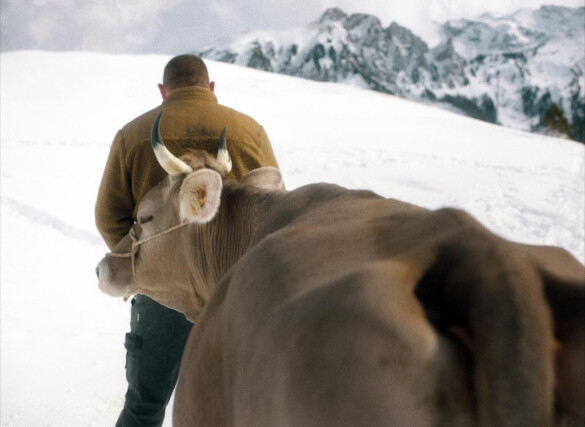 Synopsis: In a remote mountain village, Anna tries to preserve her young love for Marco, against all odds.

Since 2012, every film that tackles mental illness and the slow deterioration of the mind when aging is being deducted into an “answer” to Michael Haneke’s stunning and heartbreaking masterwork, Amour. Sure, they may (or may not) have been inspired by Haneke to tell their own stories. Still, most of them are pretty different from each other. Earlier this year, we saw Gaspar Noé tackling dementia in Vortex, his most approachable yet disconsolate film to date, via a split-screen cinematic dynamic, in which it followed the leads like intruding ghosts. It created a haunting sensation from beginning to end, getting the sensations of a horror film, but its scares came from a grounded place rather than supernatural endeavors. Making its festival runs is Mia Hansen-Løve’s latest feature, One Fine Morning – a film that delicately explores how a daughter copes with the neurological disease her father is going through. Both of these films may have minor similarities, but they are entirely different in most facets. Within that distinctive note arrives a new film by Swiss filmmaker and screenwriter Michael Koch, A Piece of Sky – Switzerland’s pick to represent them at this year’s Oscars.

The only similarity that Koch’s work has with Haneke’s is the contemplative and slow-paced approach to tackling the debilitation caused by the illness, which forces a spouse to become a caretaker for the sick. The rest is infused by the stylistic techniques he has implemented throughout his career and some twists of its own. In the case of A Piece of Sky, the genders are swapped; the woman is playing the role of the caretaker while the patient is a grizzly farm worker. The second “twist” in its narrative, compared to Amour, is that it is focused on younger people. The age difference between the two films is vast, creating different dynamics within the central relationship of wife and husband, caretaker and patient. What Koch wants to explore is how to deal with such an illness and the tragic essence of saying goodbye to a life that’s starting to bloom. Beauty and tragedy are intertwined through the Swiss mountains and landscapes – quietness drenches the screen in solemn dread, immersing the viewers in the story’s emotional hymns.

A Piece of Sky begins with a classical sense of romance between a farm worker, Marco (Simon Wisler), and a barmaid, Anna (Michèle Brand) – two people falling in love through a meet-cute procedure which we have seen before. From the start, there’s a sense that damnation will rain over the fairy-tale-like lover’s parade. Everything seems like it is running its course toward tragedy, even in its romance scenes. During their wedding, Marco begins to experience a severe headache, which causes him to throw up and lose his balance. It appears that he has developed a brain tumor, and surgery is needed immediately. Initially, Marco continues his daily life as usual – working hard as he tends to do. However, when his condition worsens (to the point where he can’t even stand up), Anna tries to care for his loved one. The relationship between Anna and Marco often reminds you of Bess McNeill and Jan Nyman in Lars von Trier’s Breaking the Waves. Their devotion to one another is always present in both scenes of affection and heartache, but Anna isn’t searching for a higher presence to help heal her loved one, unlike Bess.

Religion isn’t a critical factor in A Piece of Sky, unlike Breaking the Waves, but a fantasy-esque element serves as a chapter introduction and curtain closer. During the closure of each stage in Marco’s illness (as his state worsens quickly), immediately following, there’s a scene where a choir sings about grief, death, the beauty of the past, and love. This could be interpreted as Koch’s rendition of the chiming bells in von Trier’s acclaimed work, a gateway into another realm where people can finally find peace. Both films contain a mysticality of some sort. While Lars von Trier intertwined his with religion and a higher presence, Koch and cinematographer Armin Dierolf let the camera linger for quite a long time – letting the audience bask in the dread-induced, yet ravishing, atmosphere. It takes its time to settle into this captivating eeriness, hence the slow pacing and stillness, yet it comes with a purpose. The pensive nature allows Koch to play with the film’s structure, creating a division between the story’s dramatic trappings and the daydreaming rhapsodies.

One thing that holds A Piece of Sky back from being a great film about illness fracturing a freshly blooming relationship is its sense of miserablism. Of course, it is hard to capture such a topic and add moments of happiness to it because there’s no delight in the minds of those affected and the people surrounding them. However, it gets to the point where it stops being emotionally impacting. Nevertheless, it is effective because of Koch’s stylistic decisions and the performances, especially Michèle Brand (who will break one’s heart with just her eyes). Still, to a certain point, the narrative isn’t moving you as it could. Nonetheless, A Piece of Sky makes you contemplate the realization of life and our minds.