Movie Review: ‘Charlie’s Angels’ couldn’t quite tap into its potential 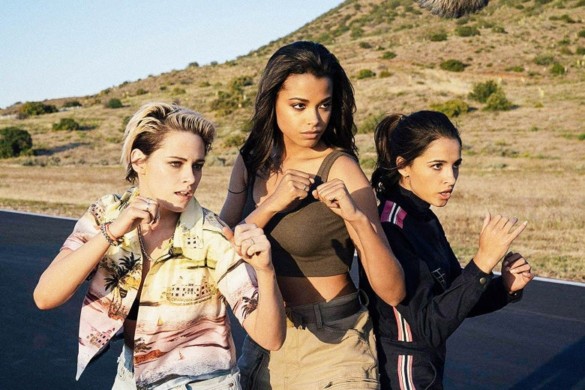 Synopsis: When a young systems engineer blows the whistle on a dangerous technology, Charlie’s Angels are called into action, putting their lives on the line to protect us all.

Charlie’s Angels has been one of the staples in campy action since 1976. There’s been several TV shows, a handful of movies, and even a video game. The newest addition to the franchise comes from writer/director Elizabeth Banks. This is Banks’s second feature film after Pitch Perfect 2 (2015) as a director and her first as a writer. The film does a great job bringing the Charlie’s Angels style action back to the big screen, but fails in its storytelling and messages.

The film follows “Angels” Sabina (Kristen Stewart) and Jane (Ella Balinska) as they try to protect systems engineer, Elena (Naomi Scott) from an assassin after she exposes her employer’s new revolutionary technology as dangerous. They are assisted by their handler and mentor Bosley (Elizabeth Banks) as they try to track down the bad guys and save the day.

The main characters are, keeping with tradition, written as stereotyped personalities (something they’ve done since the original tv show). There’s Sabina, the heiress / dumb blonde. Jane the former operative, highly trained weapons expert devoid of emotion. And finally, Elena, the smart one who’s good with computers. I understand that this has been the standard when it comes to action movie characters – they feel like they have to include those stereotypes to make a “successful” movie (especially one starring women) but it feels old and tired. Another problem I had with the film was its overcomplicated plot. There were too many shocking reveals of potential bad guys and attempted plot twists for something that’s supposed to be a fun action movie. It didn’t work, it felt weird, and I didn’t like it. My biggest problem with the film was it didn’t know what kind of movie it wanted to be. It bounced between serious action movie, campy action flick, and girl power movie but didn’t deliver as any of those. I think the only way a Charlie’s Angels movie could work is if they took the campy route. There is too much history with the franchise to try and make it any more than it’s been in the past (which was mostly horrible stereotypes, objectifying women, and excessive innuendo…) They could have taken that questionable history and made it fun and campy, yet still appropriate, and less cringe worthy for a modern audience.

Even with all my complaints, Charlie’s Angels did have some things going for it. I loved Kristen Stewart in this film. It’s been a while since I’ve seen her in a comedy and I think she was one of the highlights of the movie. She was funny and she seemed to have embraced the ridiculousness of it all. She has some of the best lines and costumes in the movie. The other Angels were okay, they worked well as a group and had good chemistry. This film has some clever action sequences, missions, and fight scenes. So even though the story is a bit wonky, it keeps you entertained. One of my favorite things they included in the movie were the nods to prior Charlie’s Angels material. You can see cameos from people who’ve starred in the franchise as well as costumes and other odds and ends if you’re paying attention. The end credits are also great and full of fun cameos.

Charlie’s Angels falls into the grey area of not good, but also not bad. I didn’t like the story and its failure to overcome the franchise’s history with objectifying and stereotyping women. I know I shouldn’t have gone into the film with high expectations, but I wanted more from Banks as a filmmaker. Overall, the film has plenty of fun action sequences and moments of comedy to keep audiences entertained. It certainly doesn’t deserve the heaps of negative criticism it’s received since its release. I wish I could say I liked it more, it definitely had the potential.