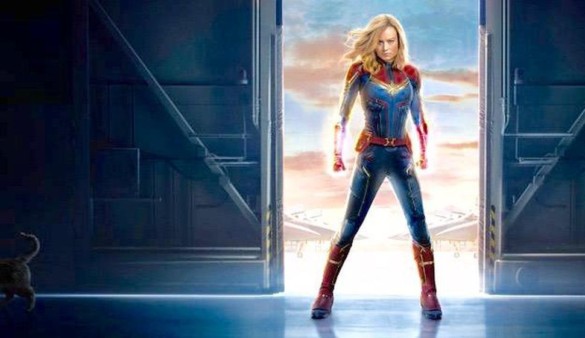 Synopsis: Carol Danvers becomes one of the universe’s most powerful heroes when Earth is caught in the middle of a galactic war between two alien races.

Captain Marvel is the origin story of Carol Danvers (Brie Larson) or Vers (pronounced Veers), a member of the Kree Starforce with no memory of her past and some interesting super powers. Her team of warrior-heroes is tasked with ridding the galaxy of the terrorist, shape-shifting Skrulls and their leader Talos (Ben Mendelsohn). During one of their missions she is separated from her team, ends up on Earth, and begins to learn more about herself and her powers. The film also reintroduces us to known MCU characters like Ronin the Destroyer (Lee Pace) and one of his future henchmen Korath (Djimon Hounsou) from the first Guardians of the Galaxy movie. We also get to see a younger Nick Fury (Samuel L. Jackson) and new-ish S.H.I.E.L.D.

I am so happy with the casting of Brie Larson, she met all my expectations. Sadly, I’m not too familiar with her prior work, so I wasn’t entirely sure what to expect (I will remedy that shorty). Larson expertly portrayed the Carol Danvers I’m familiar with from the comics. She was snarky and tough, and a perfect counterpart to Nick Fury. They had some awesome buddy cop / Men in Black vibes going on. Her characters growth throughout the film was relatable and fun to watch. I loved all the little details Brie Larson put into the character. The film has a message of embracing who you are and perseverance- get back up, don’t give up even if everyone is telling you to. I think it’s an excellent “girl power” movie, while also being a good superhero movie. It’s not an in-your-face feminism, just for girls film, I think anyone can enjoy it.

The supporting cast was also great, especially Samuel L. Jackson and Ben Mendelsohn. I’ve decided I’m a Ben Mendelsohn fan for life and have to go out and watch everything he’s ever been in or will be in. I also liked Jude Law as Kree commander Yon-Rogg and Lashana Lynch as awesome pilot and Danver’s bff Maria Rambeau. I think everyone will agree that the true star of this film is Goose, an adorable orange cat. She (Yes Goose is female in the movie and in the comics) manages to share the screen with Brie Larson and Samuel L. Jackson and still stand out. The movie also has lots of fun things to try and spot. It’s filled with 90s nostalgia and takes place sometime between the release of True Lies and The Smashing Pumpkins’ Mellon Collie and the Infinite Sadness. There are also comic book references sprinkled throughout the movie. There are two huge, but subtle, hints at another awesome female character potentially making an appearance in future MCU films. Another positive for me was the music. The score was appropriately epic and the use of cleverly timed 90s tracks was fun and also added something extra to the film, especially the action sequences. It made me think of all my favorite action movies from the 90s, but with much better special effects.

I’m a fan of the MCU and the comics, so I did not want to be disappointed by Marvel’s first female led film. I had a few questions and expectations going into this movie- Is this going to be a good stand-alone film, or will the viewer need 10 years of MCU backstory to understand what’s going on? Will Captain Marvel give us hope or any clue into what is going to happen in Avengers: Endgame? Does it live up to the comics? Thankfully, it answered most of my questions and fulfilled my expectations. First, the film 100% stands on its own; you don’t really need any prior MCU knowledge to enjoy it. It obviously helps, and there are inside jokes and things to look for, but it’s not required. It doesn’t give us any clues as to what’s going to happen in Avengers: Endgame but seeing Captain Marvel’s powers on-screen definitely has me excited and even more impatient to see how things with the Avengers pan out.

I did have a few complaints. There are some continuity issues this film creates within the MCU. One in particular (a certain valuable object makes an appearance) is perhaps unnecessary and I’m not sure why they did it other than to bring in an element fans were familiar with. The Kree were also confusing and I don’t think they explained their lifestyle or society very well. The beginning of the film is jumpy and it’s hard to follow what’s going on and who’s who. It does get better when Fury shows up. None of these things were “bad” enough to make me dislike the movie. I also saw this at an Alamo Drafthouse theater, they show short relevant clips and movies in the 20 minutes before a movie starts. For this film they used that time to explain the history and many variations of Mar-Vell, Ms. Marvel, Captain Marvel, and Shazam. I think that was beneficial, especially if you haven’t read any comics.

To wrap up, I loved Captain Marvel. It gave me almost everything I wanted and introduced us to an amazing new character. It was fun and inspiring and gave me lots of fuzzy 90s nostalgic feelings. I can’t wait to see her in Avengers: Endgame later this year. If you do see this in the theater, make sure to stay until the very end of the credits.