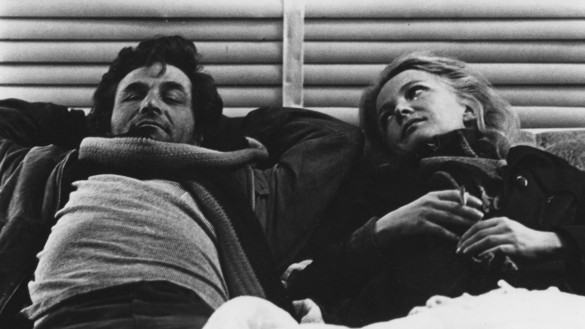 John Cassavetes’ acting career is in itself highly impressive, having starred in numerous television shows including Alfred Hitchcock Presents, Johnny Staccato, and Burke’s Law, as well as noted movies including The Killers, The Dirty Dozen, and Rosemary’s Baby. He also appeared in his own movies (some of which stared his wife, the brilliant Gena Rowlands) where he scraped enough money to finance himself through his work, enstalled improvisation to his actors, and shot it in the non-traditional, open flow style similar to French New Wave. Cassavetes is considered a pioneer in American independent cinema long before many others went to form their own production companies that worked outside the Hollywood system.

Cassavetes wrote and directed a dozen films with multiple other unproduced screenplays left behind after his death in 1989. A few are considered superior and astounding works that cut enough into the critics’ ranks at the time; some were panned but reevaluated afterward. Here are among his best works.

In his directorial debut, a white man has a relationship with a woman he does not realize initially comes from an all-black family, which shocks them that she is even going out with a white man. Her dark-skinned brothers are struggling jazz musicians who disapprove of her interracial relationship, but she is an independent woman who will not conform with her ways of life. Cassavetes shot this twice; first in 1957, where it was poorly received, and then in 1959, which was acclaimed and won at the Venice Film Festival. The cast were all non-professionals, made on location, and spent an extensive time improvising a young generation that was more open-minded and lively as the beat in a jazz club.

Marriage Under Fire would be a fitting alternative title about the dissolving relationship between a couple who go off and spend a night with friends drinking and hooking up with others to fill in their sexual needs. This isn’t short and straightforward as his previous film. Faces was presented in various cuts, from three hours at its premiere to the 2:10 cut it had for general release. (That is the case above but the Criterion cut is 17 minutes longer than this version.) The turns in mood never changed as we cut back and forth and witness the couples’ head-first slide into the debacle of a crashing relationship. Even with the grainy black-and-white 16-mm, it is shot in, viewers can pick up on the extensive realism Cassavetes puts on that was virtually scripted, not improvised as Shadows was.

In terms of his direction, Cassavetes hit the highest note by letting his wife, Gena Rowlands, play a housewife who suddenly has a mental breakdown, forcing her husband, played by Mr. Colombo himself, Peter Falk, to put her in an institution. The first half watches the slow breakdown of Rowlands’ character and the decision by him to put her in a hospital for 6 months. The next half is how he struggles to handle their children all alone and then watch her come back as only a person held together with bandages. Her deterioration and Rowlands’ portrayal as a mother who is losing grip with reality, even when she’s told to be herself, is something of another range of acting and something right out of Cassavetes’ style that couldn’t fit more perfectly. The same can be said for Peter Falk’s character as the father struggling to keep things together even with the major fracture (“A loose screw,” he tells a co-worker) in the woman he loves.

Ben Gazzara plays a nightclub owner named Cosmo (yes, there was one before Kramer) who pays his gambling debt in full to a loan shark, only to fall into debt again after a poker game to the mob. To clean his debt, Cosmo is given the task of performing a hit on a rival bookie, who Cosmo learns afterward was actually the boss of the Chinese mafia in America. Suddenly, Cosmo finds himself double-crossed and has to shoot his way out of his debt. This was Cassavetes dipping into the criminal side of the dark spectrum and explore the uglier side of people. Cosmo is sleazy but he is no hitman, just a fool to go into the red again after just climbing into the black. Through its disorganized feel is a sense of uncertainty with Cosmo’s behavior and how he’s just a second-rate owner not cut out with the really rough stuff on the street.

Cassavetes and Rowlands play brother and sister, he is an alcoholic writer while she has just gone through a divorce. The writer is on a path of self-destruction that seems almost telling of Cassavetes own personal struggles; he battled alcoholism his whole life before dying. The sister tries to pick up the pieces of her life by trying to help her struggling brother. This was his last film (he technically did one more film, Big Trouble, but he was hired to take over after it started and later distanced himself from it) and is the closest to a mainstream film that he would direct coming out of his own fruition. Two people dealing with the difficulty of love shattered and hammering away is no new story, but Cassavetes takes a sledgehammer when they go off yapping.

John Cassavetes is an icon of independent cinema that spawned numerous directors to succeed outside the Hollywood system in order to get inside later for major works. There’s a reason an award is named after him at the Independent Spirit Awards. His ability to finance films on his own, control the rights to them (still owned by his estate), and tell the stories in his style made him a highly respectable figure for those who wanted to seek the same power. He made his acting personal, stripping and rebuilding the performances and threw away the glamour of what the camera sees, keeping a more raw look that was grainy. In its unpolished touch, there is no gloss that shields the bleak in the background or on the faces of his characters. That is the real life Cassavetes wanted and got.