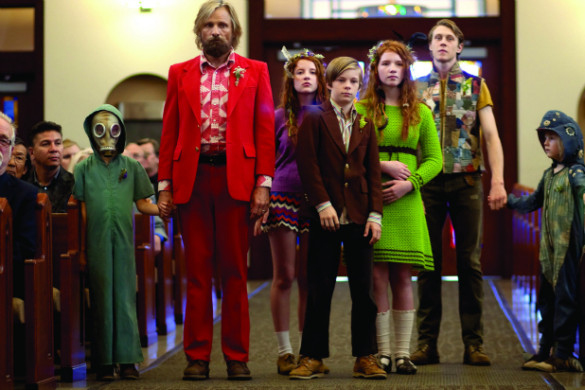 Synopsis: In the forests of the Pacific Northwest, a father devoted to raising his six kids with a rigorous physical and intellectual education is forced to leave his paradise and enter the world, challenging his idea of what it means to be a parent.

This year has been seen an expansive divide between “big budget” filmmaking, which has been more of a let down, and the indie circuit which has been thriving stupendously in 2016. Matt Ross’ Captain Fantastic continues that upward trend for the indie market. Ross delivers a really funny, smart and emotionally satisfying film, all without being overly sentimental.

In the forests of the Pacific Northwest, Ben (Viggo Mortensen) is devoted to raising his six kids with an intellectual education and philosophy that challenges societal norms. Ben also implements a rigorous physical regiment that all of his kids must abide by at the same time. When they learn the fate of their mother, Ben is forced to take his family on a trip that causes friction between what he’s been teaching his kids and how the real world operates. All of this leads to a stirring conflict that will satisfy both of your movie needs for laughter and emotion.

Viggo Mortenson gives arguably one of the best performances of his career. Ben’s convictions and the love he depicts for his kids really comes through in Mortenson’s performance. The brutal honesty of his character not only adds a thematic punch to this film but also blistering humor that works great here. George MacKay is also very good as the eldest son, who is longing for some normalcy while still holding onto the roots of what his dad taught him. Nicholas Hamilton is worth noting as well. His scenes with Mortenson in particular are very affecting.

Captain Fantastic resonates heavily because of how Ross smartly interweaves a narrative that is fun on the surface but also thematically rich. The film offers several different viewpoints on parenting philosophies and cultral norms without telling the audience which one is right. Ross leaves it up to the audience to decide and simultaneously these notions provides robust conflict for the adult characters of the film. In one scene we see Ben and his family at dinner with extended family and it’s clearly evident that cultural norms are rubbing up against the isolation that Ben and his family have been clinging onto for years. The culmination of this tension is really funny but it raises some great questions about how we parent and why we choose to hide certain things from children.

Captain Fantastic thrives on comedy that knows when to peek its head and when to let drama and emotion carry the audience. Alex Somers score provocatively amplifies each of those elements, as does the beautiful cinematography from Stéphane Fontaine. The imagery of Captain Fantastic is breathtaking during its opening act when we are introduced to Ben and his family. Even as the family progresses from its initial location, Ross doesn’t let his setting go to waste. The camera becomes an important tool that he uses evocatively to capture the beautiful symbolism underneath this film and it makes for some captivating filmmaking.


Hear our podcast review on a previous Extra Film: