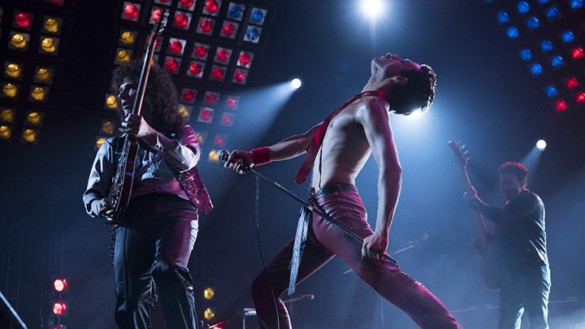 Synopsis: A chronicle of the years leading up to Queen’s legendary appearance at the Live Aid (1985) concert.

Bryan Singer’s Bohemian Rhapsody touts that Fearless Lives Forever. It’s sad the film amounts to nothing more than an empty promise. What should have been a deep dive into one of the more fascinating rock stars of all time amounted to nothing more than a cliff notes version of an iconic performer. It’s a shame because Rami Malek’s performance in the film was fantastic. Leaving the film, one couldn’t help but wonder what it might have felt like actually watching a movie which genuinely examines Freddy Mercury’s life. Why even attempt to tell his story if you weren’t willing to honestly tell his story? What purpose did that serve?

Anthony McCarten’s narrative seemingly cuts corners and glosses over who Mercury was. At no point do we get any indication of why he distanced himself from his culture at a very young age. Bohemian Rhapsody barely touches the surface of Mercury’s widespread drug use and frequent sexual trysts with various men. There’s this whole dichotomy between the perception of Mercury and who he indeed is, which the film avoids. Did they fear some backlash? The story just seemed too clean and did little to promote buy-in from the audience.

What I was most conflicted about the film was how I didn’t just outright loathe the movie. There’s much about Bohemian Rhapsody which works. Malek’s portrayal of the tortured lead singer of Queen is undoubtedly worth the price of admission. The staging of the film itself is head and shoulders above its actual content. My biggest highlight was how the film staged Queen right before their final performance at Live Aid 84. Seeing all of them together once again in that trailer brought just how close these band of misfits were and the genuine love they had for one another. It was clear at that moment; Queen was meant to be together so they could change our world.

While Julian Day’s costume design and Malek’s performance are both equally stellar, there’s no way anyone could recommend this film. What should have been the easiest story to tell (as Mercury’s life has been well documented) ended up being the equivalent of a very basic VH1 special. While fans of Queen will certainly gravitate to the release, they will walk away wondering what the hell just happened. Singer’s paint by numbers approach is an insult to fans. Bohemian Rhapsody is at best a two-star film and will find it’s way to Red Box in no time where it will be forgotten.