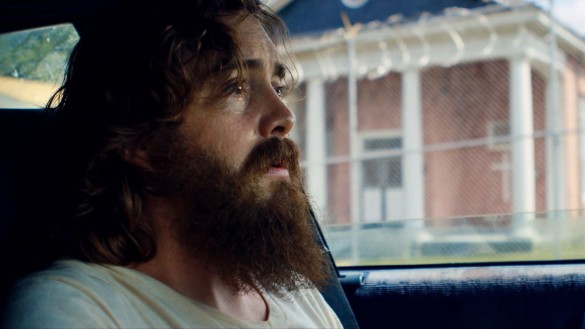 Synopsis: A mysterious outsider’s quiet life is turned upside down when he returns to his childhood home to carry out an act of vengeance. Proving himself an amateur assassin, he winds up in a brutal fight to protect his estranged family.

DIRECTION
Blue Ruin is a dark and gritty film that is focused and moves the story forward at a stead pace. Jeremy Saulnier, in his second feature film, does a fantastic job of setting the tone early with an ambiance that only goes in one direction. The film is assembled differently from most other revenge-thrillers as the first act comes to fruition leaving wonder as to what the rest of the story will be. However, Saulnier wastes no time however as things start to unravel leaving plenty of room for some great action and character moments. The cinematography is gorgeous and there’s a strong attention to details that makes Blue Ruin one of the best shot films of 2014 so far.

SCRIPT
The story is simple on the surface but is layered with deep internal struggle and pain that gives this film character. The film is centered around Dwight (Macon Blair), who is a drifter with long gangly hair and a beard that would make ZZ Top proud. We find Dwight living on the beach with no personal connection, disconnecting himself from the world and seems to have nothing really to live for. And then comes the news; the news that his parents’ killer is getting out of prison. The moment Dwight learns on this, something sparks in him and all of a sudden purpose has a name; Revenge. Without much thought, he moves with emotion and a pain that’s built up over (probably) years, with only one end goal in mind. The story framework is kind of fascinating in the sense that once the first act crystallizes, you’d almost think the film is over, when in reality it’s just beginning. We more or less see a Hatfields & McCoys rivalry begin with heavy consequences that’s thrilling and harrowing throughout. The story may be simple but the unique framework and gritty execution makes for an enjoyable, especially with such an intriguing main character.

PERFORMANCES
Macon Blair is a one man show and subtly delivers one of the year’s better performances so far. It’s not his dialogue so much as it is his non-dialogue quirks and body movement that sells this character. Perhaps it’s Blair’s inexperience that elevates the amateur qualities we see in Dwight, which is a defining trait to this intriguing character. Either way, Blair is 100 percent believable and is masterful in drawing you in to his story, regardless of the morality of his actions.

SCORE
The score here is brought to us by Brooke and Will Blair who do a fantastic job of keeping the score subtle but with tones that feel like you’re sitting on a cold bench. It’s not fun nor is it comfortable but the music adds the right about chill that climaxes the thrill in a solid way.

FINAL THOUGHTS
Blue Ruin is not a warm feast or is it one that makes you feel good when the end credits roll. However, Saulnier and Blair do a wonderful job of engaging you in this guys’ story of pain and emotion that ultimately leaves him in one direction. We see a pretty massive physical transformation in Dwight as well as a metaphorical one that was pretty fascinating.