Movie Review: Blair Witch is more of the same, but still satisfies 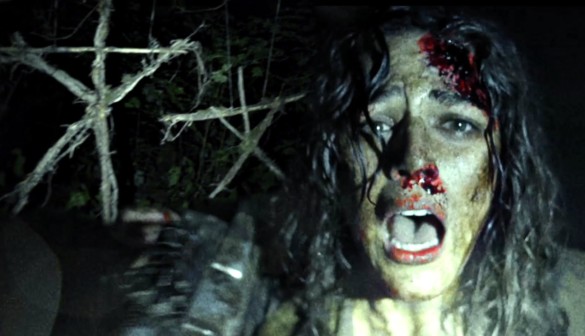 Synopsis: After discovering a video showing what he believes to be his sister’s experiences in the demonic woods of the Blair Witch, James and a group of friends head to the forest in search of his lost sibling.

It was revealed at San Diego Comic-Con 2016 that The Woods is really a direct follow-up to the breakout 1999 film, The Blair Witch Project. Those unfamiliar with the previous film, it tells the story of film students, Heather Donahue, Michael C. Williams and Joshua Leonard, who travel to Maryland to investigate the legend of the Blair Witch. In this day and age, it is very hard to keep anything a secret, so the fact that this film was successfully able to remain secret for almost a year is impressive. Now that the cat is out of the bag, does Blair Witch has the same flare as its predecessor after 17 long years?. Director Adam Wingard and writer Simon Barrett (the team behind You’re Next and The Guest) invites back to the same woods.

For some odd reason, James (James Allen McCune) thinks that after 22 years that his Heather is still alive after he sees supposed footage of her in a YouTube video. Based on the footage displayed in the video, there is no way I would even remotely go close to that place. Nevertheless, James convinces his three friends, Lisa (Callie Hernandez), Ashley (Corbin Reid) and Peter (Brandon Scott), to travel to the same woods. The technology gap is very apparent from the first film to now as the team uses several devices that allow them to capture the action from different devices and angles. GoPro’s, iPads, and even a drone are used to capture the action and it’s a welcomed addition because on of the best scenes comes via the angle of the drone. The team is joined by the pair who found the DV tape—Lane (Wes Robinson) and Talia (Valorie Curry). You know the story, the longer the group stays in the woods, the worst it gets for them. Once nightfall comes, the group begins to hear strange unexplained noises at night and waking up with mysterious stick figures surrounding their campgrounds.

The challenging thing about horror movies is obviously scaring the audience. We have pretty much seen it all, the familiar eerie music, the out-of-nowhere loud noises, all in order to create cheap, predictable jump scares. Wingard uses those techniques and the popularity of The Blair Witch franchise to create good scares. Mixing in various camera angles with loud noises, and it makes for an uncomfortable situation, especially being lost in the woods at night. Blair Witch may not be as scary as other films, but for most of its running time it creates anticipation. The film takes its time building up each night, like Paranormal Activity, where things get stranger and stranger, or in this case louder and louder.

The characters in this film are not as memorable as Heather but they still put in convincing enough performances as they run frantically in the woods.

Blair Witch, no matter how good it is, just cannot replicate the same buzz as the first one because since you know the title, you already know what to expect and there are very few changes from the original plot. The climax of this film tries to incorporate a supernatural aspect and it comes across as convoluted.

I would love to see this director-writer duo take on another original idea in this genre because although they bring new elements to this franchise, however, after 17 years I just don’t think it was necessary to retell this story. Blair Witch is simply going to be for anyone who enjoyed the first film and wants a slightly above-average movie sequel. It’s not great but it’s enough to satisfy.