Movie Review: ‘Bird Box’ is a reminder that quality films aren’t just on the big screen 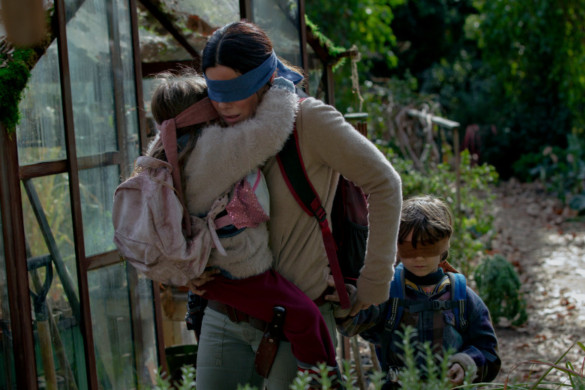 Synopsis: Five years after an ominous unseen presence drives most of society to suicide, a mother and her two children make a desperate bid to reach safety.

I ran into an article the other day that went over the history of Sandra Bullock’s career and it had me wondering what was the last of her films I had seen. It turned out it was Gravity back in 2013 which really surprised me. I had always respected Bullock as an actor yet I hadn’t realized she had not been cast it much since Gravity (Her last major role was in Ocean’s Eight which I happened to miss in theaters). My thoughts quickly turned to wonder where I would rank Bullock among other actors and my gut told me she would be pretty high. And it is because of this I had been quite anxious about catching Bird Box, her newest film and Netflix original movie. I knew very little about the film other than the basic plot but the interesting combination of Bullock and Netflix caught my attention and for good reason. In addition to taking over social media with the countless Bird Box memes, the film has been receiving some positive accolades and I have to agree, the film is a captivating thriller.

Bird Box’s plot may sound familiar: A mysterious and seemingly global catastrophe occurs when a strange phenomenon begins driving sane people to commit suicide. The first thing that came to mind was M. Night Shyamalan’s 2008 film The Happening, a decent film but not among my favorites of Shyamalan’s work. The films though are quite different in tone and execution. Bird Box does a better job of establishing rules regarding the phenomenon which isn’t a slight against The Happening, honestly the mystery of the “how” and “why” fit better for the film as well as Shyamalan’s directing and writing style. Bird Box also has a much darker tone to it and has the feel of a post-apocalyptic film, it can be unsettling at times. Susanne Bier’s directing style and sense of tension will have you holding your breath. She makes it very easy to put yourself in the survivor’s shoes especially Malorie (Sandra Bullock). There are also some absolutely heartbreaking moments that almost had me in tears. I won’t go into details but I will say, Vivien Lyra Blair, as “Girl”, is just amazing and although she doesn’t get a lot of screen time she is a very memorable character in the film.

The pacing is perfect, the film really dives right into the plot and you won’t have to wait too long to start seeing the world fall apart and the pieces set in place. One warning, the film doesn’t flow in a linear way chronologically, it bounces back and forth temporally unraveling the fate of the survivors. It didn’t bother me but I find it worth mentioning as I have had others tell me it threw them off a bit. Although the pacing is great I did find the script and dialogue in the first act a little wanting. It isn’t bad by any means but it didn’t quite grab me right away.  The word I would use to describe the first act is “awkward”, it took some time to fully realize some of the characters motivations and for the story to settle in. Once you get past that the remainder of the film is a very pleasurable viewing experience. The story begins to show direction and unravel and the tension really starts to mount and you will find yourself not wanting to miss a beat.

One thing that caught me off guard was the cast as there are a few well-known names I went in totally unaware are attached to the film. We have a John Malkovich sighting who plays Douglas an annoyingly impolite and paranoid survivor and neighbor to Greg, played by BD Wong, another actor I respect and always enjoy seeing on-screen, whose house the survivors hole up in. Sarah Paulson also stars as Malorie’s sister Jessica and Moonlight’s Trevante Rhodes provides one of the better performances in the film as Tom who takes on a leadership role within the group. There are a few other familiar but fresh faces that you may recognize from some recent films. Bullock is the one that really shines here though, she does an outstanding job and her performance made me realize how much I miss seeing her on-screen. She has a certain kind of charisma and presence that makes her stand out in any performance and she really nails it with Malorie in Bird Box. With the exception of her and Rhodes though nothing else really stands out performance wise, each cast member does a fair job in their role and capturing their characters strengths and flaws.

The trailer and synopsis for Bird Box had me hesitant, I wasn’t sure the film could manage the combination of being compelling as well as giving the audience a satisfying story from beginning to end. But Bier and team really came through, the film exceeded my expectations and at the same time reawakened my faith in Netflix films. It has its flaws and requires the viewer to stretch their imagination a bit but overall I was impressed. I am sure this won’t be a popular opinion but I actually would put this film over A Quiet Place, a similar 2018 film that many seem to compare to Bird Box. Although A Quiet Place did a better job all around with character development, Bird Box’s story kept me more engaged and I found myself more involved in the plot and mystery. A Quiet Place is a fine film, the margin between the two is small but Bird Box has the edge and I have already recommended it to many of my friends. I cannot wait to see what else Netflix has up its sleeves and I am happy to say Sandra Bullock is back on my cinema radar. I am looking forward to seeing what 2019 has in store for both.