Movie Review: ‘Beckett’ Will Take Your Breath Away 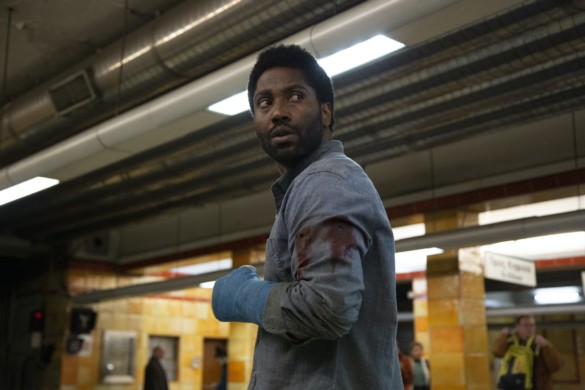 Plot: Following a tragic car accident in Greece, Beckett, an American tourist, finds himself at the center of a dangerous political conspiracy and on the run for his life.

When was the last time you’ve said, “They don’t make movies like that anymore”? Because that was my initial reaction through the entirety of Fernandino Cito Filomarino’s political thriller, Beckett, a terrific “wrong man at the wrong place at the wrong time” thriller that seldom gets made today in a sea of IP-driven blockbusters and franchise films. The movie sees our titular character (John David Washington) become the central part of a political conspiracy after crashing his car in a house while vacationing with his girlfriend (Alicia Vikander).

The entire film is staged like a 70s paranoid thriller, with a European flair, as Beckett continuously flees corrupt police officers and U.S. Embassy Agents who are trying to kill him before he founds out his car landed on the house where the kidnapped nephew of a Greek politician is being held hostage by far-right ultranationalists. And while all of it seems terribly preposterous, with a surface-level political subtext, Filomarino takes inspiration from the greatest thrillers of our past to craft something wholly unique and engaging, without ever letting up the tension and making its extreme game of cat-and-mouse between Beckett and a world he did not want to be a part of more unpredictable by the minute.

Its original song, Born to Be, from Devonté Hymes, already establishes the film’s classic feel during its opening sequence. Still, it’s when Beckett gets caught in a chase between himself and Greek police officers that the word “Hitchcock” immediately comes to mind. That’s mainly due to Ryuichi Sakamoto’s electric score, which immediately recalls the great work of Bernard Hermann, with a staccato-like tempo through string instruments establishing the movie’s brilliant tension to the point where I was on the edge of my couch the entire time. In addition, Sakamoto single-handedly makes every single action sequence more thrilling, whether it’s signaling to the audience that Beckett is in danger through a sharp violin launch, as undercover ultranationalists are trying to stab him at a Subway station before he makes it to the Embassy, or when he’s caught in one inexplicable foot chase after another, having no idea why the police would want to kill an innocent person who was unfortunately caught in a tragic accident.

Washington also reminds the audience how great of an action star he is, and in fact, gives a better performance here as his past tenure in the realm of action in Christopher Nolan’s TENET. In Nolan’s film, he was sleeker in his one-on-one fights and precise during chase sequences in firefights. In contrast, in Beckett, he’s more imprecise, rough, and relies solely on his survival instincts to stay alive as long as he can, which makes its action sequences feel more urgent and thrilling. Take the scene where he jumps off the top floor of a parking lot and lands on a car as he tries to stop it from driving away. Of course, no one would ever do that because it would almost mean certain death. But Beckett can’t think rationally anymore since he’s embroiled in an event where everyone is after him for having been at the wrong place, at the wrong time. To survive, he must always be one step ahead of his opponents, even if it means risking his life and doing the craziest things imaginable. TENET‘s problem was that the action sequences were a bit too good for them to have any emotional weight (it didn’t help that its characters were thinly written and spoke like video-game NPCs). Beckett aims for raw, human catharsis and crafts its action sequences in that regard.

None of the action is dull. Filomarino, the great-nephew of Luchino Visconti, is highly literate in cinema’s visual and aural medium. He teams up with cinematographer Sayombhu Mukdeeprom, known for his static work with Apichatpong Weerasethakul, who makes his camera the central object of Beckett’s descent into chaos. As Mukdeeprom moves the camera in different situations, it allows for Washington and actors like Boyd Holbrook to take full advantage of the film’s large, IMAX-like canvas and move in more unpredictable situations. For example, during a foot chase between Beckett and Tynan (Holbrook), the visual and aural medium of cinema meshes together to create an unforgettable sequence; Beckett hits Tynan with a light, in the most incalculable way imaginable and slowly tries to disperse himself through a crowd inside a protest. Sakamoto’s musical composition then becomes reminiscent of Goblin’s drum-heavy score from Dario Argento’s Deep Red, as Mukdeeprom’s minimal camera tilts and Washington’s panic-stricken state allows for the tension to build itself up naturally and for audience members to become wrapped in the film’s endless chase sequences. The movie’s fast pace never allows the audience a moment to breathe and discern what’s going on—Filomarino wants to make sure they’re on their toes all the time, even if it means sacrificing important plot development and clearly defining its political themes.

But I’ll admit I didn’t much care about its political storylines. The weakest part of the film was when Beckett meets Lena (Vicky Krieps), a political activist organizing a rally for Karras. While Krieps always gives a great performance, none of its political themes are properly explained and make an ounce of sense. But it didn’t really matter. Filomarino knows that it doesn’t matter and focuses on crafting an unrelenting action/thriller featuring John David Washington’s greatest performance and one of the very best film scores of the year by one of the greatest musical artists of all time. Filomarino, alongside executive producer Luca Guadagnino, teamed up with masters of acting, music, and cinematography to replicate and breathe new life to a long-lost genre of cinema. If Beckett were an unreleased 1970s paranoid thriller that Netflix recently remastered, I’d believe it. Even if the film has a rather middling critical response, I couldn’t help but be blown away by how skillful Filomarino is as a filmmaker, especially because it’s his first English-language film. Go in with low expectations, and it might just take your breath away.