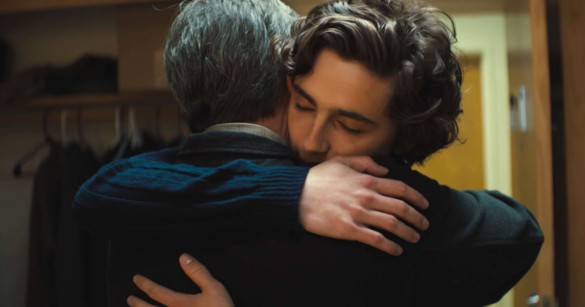 Synopsis: Based on the best-selling pair of memoirs from father and son David and Nic Sheff, Beautiful Boy chronicles the heartbreaking and inspiring experience of survival, relapse, and recovery in a family coping with addiction over many years.

There have been many films that have tackled the ideas of addiction and what it does to the people around them, the people they love. Whether it be drugs, sex, alcohol or anything in between, we have seen stories, both real and fictional, that take us on the journey of addiction and tackle it in such respectful, heartbreaking, and interesting ways that we become compelled to help those in need as we are watching events unfold on the screen. Films like Trainspotting, Shame, Requiem for a Dream, Boogie Nights, The Lost Weekend, Bad Lieutenant, The Man with the Golden Arm, Ray, Walk the Line and many, many more have transformed cinema in the way a story about addiction can be told and how that make us interested in having a conversation about the issues at hand, the issues that many face around the world. I say all of this because I don’t believe that Felix Van Groeningen’s new film Beautiful Boy will come close to living up to those other films and moving the conversation about drug addiction. Instead I believe that this film will be known as a forgettable slog that never figures out what it wants to say about its characters and the heartbreaking choices they are having to deal with.

Beautiful Boy follows the lives of David and Nicholas (Nic) Sheff (Steve Carell and Timothee Chalamet), based on the memoirs that both of them wrote both the true events in the films. David is a freelance writer for Rolling Stone magazine that lives with Nic, his wife Karen (Maura Tierney) and Nic’s two step siblings on the outskirts of San Francisco. Nicholas is shown in flash backs to be a very smart, bright young man that has the world in the palm of his hand. But what he isn’t showing his father is that he is slowly starting to lose himself to drugs, especially crystal meth. Upon finding this out, David, Karen, and Nicholas’s biological mother Vicki (Amy Ryan) do everything in their power to get Nic back on to who was before he turned to drugs.

The rest of the film plays out like a two-hour montage of Nic taking drugs, telling his family he is going to change, relapsing and repeating the process over and over and over again and never really learning anything along the way. We also see the deterioration of his family, especially David, who was the closest to Nic and is struggling to understand what has happened to his son. By the end of the film, we still don’t fully understand why Nic reached to drugs fully and we don’t really get to see the real life characters on screen reconcile in a way that seems right to getthe story to the conclusion that is known. Overall, the film is a mess in how it tells this story, which is baffling considering the Groeningen and his writing partner had not one but two different source materials and still couldn’t make a script that was halfway compelling.

Groeningen’s direction is fine, he makes the film look more interesting than the film really is but another real problem with this film is the editing. We cut back in time periods of these character’s lives, going back and forth, and at times, we don’t even know when events on screen are taking place, and whether Nic is on drugs or it is flashbacks to when he was clean. As someone that never gets lost with films, I can tell you I was confused a lot watching sections of this film. It made me question what I was watching and if I was seeing a first cut of the film or the final cut.

The performances in Beautiful Boy are uneven at best, leaving to chemistry issues throughout the entire film. Carell is good as David, doing everything he can to make this character compelling. While some of his tone in his voice does go all over the place in the more emotional scenes, I really think he nails the quite moments and you can totally see the pain in everything he is doing for Nic throughout the film. Ryan and Tierney give serviceable performances, though they aren’t given very much to do, leaving the film to be a two man show for Carell and Chalamet. And speaking of Chalamet, I think of all the performances in the film, I thought his performance was the worst, and one that did nothing for me. Almost every time he was on the screen, I felt the film started to lose any of its momentum of trying to say something meaningful. His chemistry with Carell is minimal at best, with only one scene really working for me, leaving an entire film where two actors trying desperately to play father and son and you just can’t buy it, leaving you to not care what happens to them on screen. This is a damn shame because while Chalamet gave one of the best performances of 2017, I feel he has given one of the most overrated performances of the year in this film, a performance so annoying and damaging to the overall film, that I rather see his performance in Hot Summer Nights, a film I loathe but would gladly watch again than seeing this performance again.

Overall Beautiful Boy is an uneven, unfocused snooze fest that has all of the boxes for Oscar bait or a film to break into the film landscape for interesting conversations but instead can’t check any of them off in the right way. This movie is disappointment and one of those films you will look back on and wonder why it didn’t work with the talent that it had on screen. Maybe it was the talent behind the camera that brought it down, but we will never know if someone with a little more of a focused eye and pen could have done with the Sheff’s story.