Movie Review: ‘Apostle’ leaves a lot to be desire despite great potential 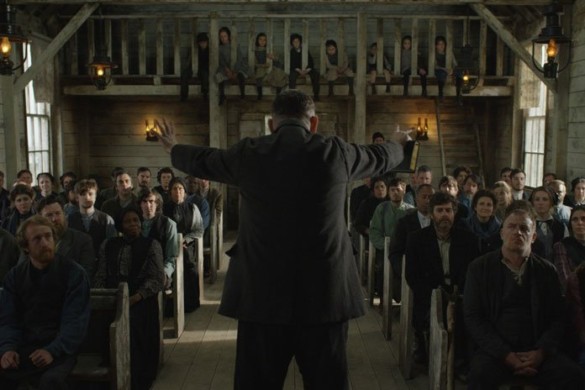 Synopsis: A former missionary travels to a remote island in search of his sister who has been kidnapped by a mysterious cult.

The streaming services have been slowly getting more competitive in their efforts to put out quality content. Bigger names are agreeing to projects and they are winning contracts over conventional studios. One of Netflix’s latest films is Apostle – brought to you by known horror writer/director Gareth Evans. The cast ranges from big names to Netflix regulars. It’s definitely not a film for everyone, the gore alone would scare many away, but overall it’s an OK movie.

Apostle is driven by the character of Thomas Richardson (Dan Stevens), a former missionary who sneaks on a cult-controlled island to find his sister. I like Stevens in this, I’ve enjoyed his progression from chick-flick male lead (Downton Abbey, Beauty and the Beast) to these darker, more intense roles. The major flaw for me was the backstory of his character. He edgy and bitter, has crazy eyes, but they don’t delve into his past or why he would be that way. You learn a little about him later in the film, but not enough for me.

The cult leader Malcolm is played by Michael Sheen. I was disappointed by Sheen, I’m not sure it was entirely his fault, but his character was not as developed as I was expecting. Usually Sheen is a reliable “good” bad guy, but he was kind of flat and predictable in this. Mark Lewis Jones on the other hand was a bit better in the villain category. His character Quinn, Malcolm’s sidekick of sorts, was much more interesting and dynamic. Lucy Boynton (Sing Street) makes an appearance as Andrea, the daughter of Malcolm and one of the female leads.

My biggest complaint about the movie is how it dragged, and the story was hard to follow. It’s just over two hours long but felt much longer when I watched it. It could do with some editing. The plot had potential, but I kept finding myself confused as to what was happening. Why wasn’t the plot advancing? I was annoyed that this movie was mostly a very un-stealthy Dan Stevens aimlessly sneaking around for two hours. I also didn’t understand the cult very well. They didn’t do a great job explaining the beliefs and weirdness going on, so it was hard to understand why I was supposed to scared. It gets a bit better towards the end, but it felt rushed and still left me with questions. This movie is a weird mix of too long versus not providing enough information.

The movie isn’t all bad, the cinematography and locations were a highlight for me. They helped set the tone and the constant uneasy feeling of the film. It’s tense and foreboding like any good horror flick. The majority of the movie is pretty tame, but then hits you with a ton of gore out of nowhere and it becomes even more unsettling and hard to watch- but that is kind of expected if you’re familiar with Gareth Evans.
It’s hard to describe this movie without giving the plot away. If you enjoyed movies like The Wicker Man (2006), Silent Hill (2006), or Mandy (2018) you might like this one. I really got a Wicker Man (minus the awesomeness of Nick Cage) vibe from this movie. I will probably rewatch Apostle to see if my opinion changes, I’m still deciding if I liked it or not.