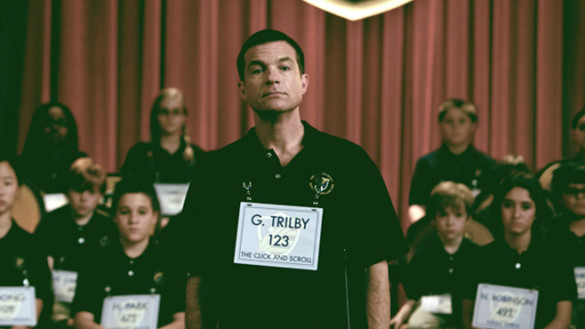 Synopsis: A spelling bee loser sets out to exact revenge by finding a loophole and attempting to win as an adult.

DIRECTION
Jason Bateman has become one of those comedians that people have grown to like or really be annoyed, so people probably have made up their minds before going into this film. Bad Words has the material that is right up Bateman’s ally, which is always helpful for a first time director. Bateman, from the moment we first see him, sets the tone comedically, all while preserving a little something extra beneath the surface. This movie mostly hinges on the script and whether or not you buy into the logic and if you’re okay with abrasive, offensive dialogue. For a first time director, Bateman takes what he has and does a fine job with it, if you ask me.

SCRIPT
The story centers around Guy Trilby (Bateman), who has decided to enter The National Spelling Bee, and has worked his way through all the qualifiers in strong fashion to get there. Trilby, however, is in his mid 30’s, which is a little difference in age compared to his contenders. He’s bent the rules but has not broken them, thus he’s allowed to compete but has made just about everyone around him pretty ticked off. While on the way to the National Bee, he meets Chaitanya Chopra (Rohan Chand), a small kid with Indian descent, who is looking to befriend Trilby. From here, the racism and sexist behavior is amplified on levels we hope to never see our own children experience at that age. The dialogue is beyond offensive, but can be funny depending on your own personal outlook. As Trilby is working his way through the Bee, with amazing quality I might add, we see that he is extremely motivated. There are some very personal reasons as to why he is doing what he’s doing, leaving room for some actual intrigue. Most comedies are either slapstick or so superficial that the enjoyment is as it is, where Bad Words had a little something more. The comedy was mostly hit or miss, but for me, there was a little depth that was intriguing for me. Give me more of that, and you’ll sell me.

PERFORMANCES
Like I said, you either like Bateman or don’t, at least for most people. Given the character, Bateman does a fantastic job of selling this character and his deeply rooted motivations. He’s a guy on a mission and uses offensive language to plow over anyone in his path, and Bateman really brought those elements to life here. Rohan Chand, for a first time actor, was incredible as well. The chemistry he has with Bateman is palpable and really serves this story well. Kathryn Hahn, whom I normally don’t care for, also added some layers that lifted up what would normally be a superficial comedy.

SCORE
Normally comedies don’t have scores that don’t mean much, but Rolfe Kent adds yet another layer that sets the foundation of the tone that carries this movie. If this film was a more light-hearted comedy, then sure, the score would probably mean nothing. Kent, however, has some great experience with films that has darker undertones and adds a score that is much needed here. Don’t get me wrong, it’s not that dark, but it’s very inspired.

FINAL THOUGHTS
Bad Words definitely has it’s funny moments but lets you decide whether or not you believe this character and his motivations. Are they good enough for him to cross the lines? Bateman leaves that up to you and for me, it works on those levels because it’s not a dumb, shut-off for two hours kind of comedy. His character is deeply hurt and has something to prove, and despite what you think of it, those elements are usually interesting. And it worked for me here.