Movie Review: Beatings, and only that, are potent in ‘Atomic Blonde’ 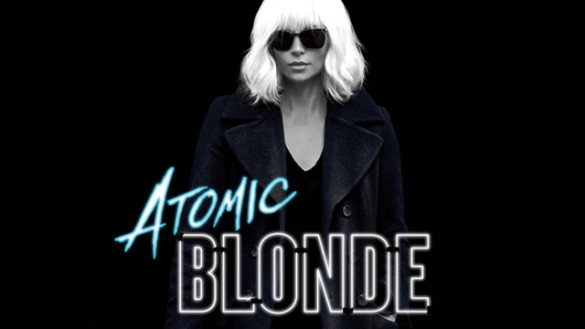 Synopsis: An undercover MI6 agent is sent to Berlin during the Cold War to investigate the murder of a fellow agent and recover a missing list of double agents.

Most will no doubt (and rightfully) take home the film’s wondrous stairwell sequence, but the one that resonates personally is when MI6 agent Lorraine Broughton (Charlize Theron) uses a garden hose to whip, strangle and bungee her way out of German police’s arms, rounding things out with a brief fisticuff downstairs. In every swing, she looks runway-ready, showcasing a bruise-inducing form of voguing while George Michael’s Father Figure caresses eardrums. Aside from again stoking the hyper-stylized pulpy fire driving Atomic Blonde, the tune’s cheekiness also reaffirms Lorraine’s rightful credentials to call everybody else her bitch. And, lo, that is gravelly uttered at one point during the later will-be-classic fight.

As long as Lorraine keeps kicking and punching, the film remains an ally to the audience.

Atomic Blonde, adapted from the graphic novel The Coldest City by Antony Johnston with illustrations from Sam Hart, is the second time screenwriter Kurt Johnstad has to deal with a lot of plot. As evident in Act of Valor, that is his Kryptonite. Regrettable, really, since the leaping of drawn panels and speech balloons onto the reel would have made a holy union with the storyline, which is nose-deep in arresting Cold War spy intrigue. It begins with the death of a fellow spy, Lorraine’s fling and also keeper of the “inches-away-from-being-called NOC” list that will expose every agent in the field. Less cliché yet equally devastating is the script’s double whammy that drains suspense, beginning with including another version of the list in the form of a Stasi defect (Eddie Marsan) and framing the narrative around an after-the-fact interrogation led by Lorraine’s superior (Toby Jones) and a CIA agent (John Goodman). As is the case with Marsan, Jones and Goodman are here as glorified – though admirably functioned – cameos.

The simple mission evolves into a mess, thematically and literally, when Lorraine is also tasked with finding a turncoat called Satchel who wants to claims the list together with the native-but-“feral” agent David Perceval (James McAvoy). After Split, it is declarable that the Scottish actor can make every persona he assumes a lovable one, even if it is of the despicable kind i.e. this drunkard-slash-horndog who has grown tired of directives and governments. No wonder he is in a party drowning in Public Enemy’s Fight the Power. To top it all off, novice French operative Delphine LaSalle (Sofia Boutella) is shadowing the two, trigger finger squarely on the camera’s shutter and beating heart for the titular character.

With these many gears in motion, we are meant to care for these characters – yes, beyond that girl-on-girl moment – but Atomic Blonde conversely has us dying for them to get hurt. We aren’t vile creatures (hopefully), there is just more effort is spent to orchestrate the brawls than anything else. And in that spirit, director David Leitch outdoes what he and stuntperson-turned-director pal Chad Stahelski did in John Wick, doling out even more hurt, complexity, realism and style – all without a shake in the framing or a rush in the cutting. At times, Atomic Blonde is like an ‘80s rocker’s lucid dream where everything aggressively bathes in hot neons and always with a spot-on tune in the background. 2017 being the year of best music moments in movies continues with Re-Flex’s The Politics of Dancing (for a dating scene), ‘Til Tuesday’s Voices Carry (during an interrogation), Pierre Schilling’s Major Tom (while fighting in a car), A Flock of Seagulls’ I Ran (while evading pursuers) and more to get toes tapping… before curling up completely when Lorraine receives other people’s knuckles.

Not a fantasy, however, is the “action icon” status Leitch gave to Keanu Reeves is now visible on Theron. After some bona-fide badassery shown in Mad Max: Fury Road and The Fate of the Furious, no further deliberations are necessary. Also found is a reason to retitle Atomic Blonde as “Wonder Woman from Nicolas Winding Refn” – a cool flame in an all-style, screw-substance yarn with an unforgettable first impression.