Movie Review: ‘Aquaman’ is a fun, action-packed win for the DCEU 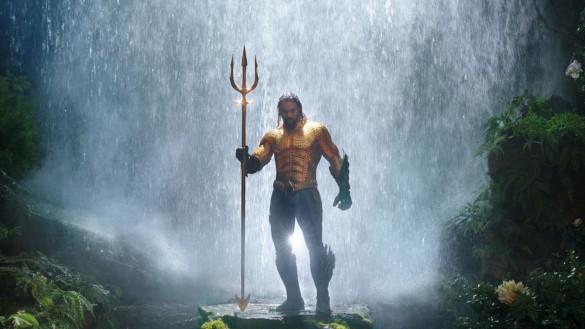 Synopsis: Arthur Curry learns that he is the heir to the underwater kingdom of Atlantis and must step forward to lead his people and be a hero to the world.

I’ve had high hopes for an Aquaman movie since it was announced that Jason Momoa would be portraying the character in the DCEU. I’ve been a fan of Momoa’s since his Stargate Atlantis days, so I know he’s perfectly capable of being an entertaining action star with great hair. Aquaman was better than I expected, it didn’t let me down entirely, but it still wasn’t quite as awesome as I hoped.

Aquaman tells the story of Arthur Curry and his journey to embrace who he is. Half Atlantean, half human, a child of the land and the sea. The film has two antagonists; Orm (Patrick Wilson), Arthur’s half-brother and current king of Atlantis, and Black Manta (Yahya Abdul-Mateen), a high-tech pirate seeking vengeance. The movie also features Mera (Amber Heard), who we saw for a brief cameo in Justice League. We also have Willem Dafoe, who plays Vulko, an Atlantean mentor type character. Nicole Kidman is Queen Atlanna, Arthur Curry’s Atlantean mother. Nicole Kidman was a great casting choice, probably one of my favorite additions to the DCEU. She is the only woman who is tall enough, bad ass enough, and has the right hair to convincingly portray Jason Momoa’s mother.

There are a lot of great things about this film. The first thing I need to mention is how gorgeous it is. Atlantis is amazing. They managed to illustrate the scale of this underwater civilization and how established it is and imply centuries of history. There are multiple kingdoms with different looks, a variety of sea creatures, and a cool take on Atlantean advanced technology. The music was equally awesome, Rupert Gregson-Williams does a fantastic job. The score just added to the epic feel of the film and gave a distinct theme to each main character. They were also able to take some of the campy, easily made fun of things traditional to Aquaman, and make them fit into the movie. Specifically, the makeover they gave his traditional orange and green suit and how they utilized and made fun of his ability to talk to fish. The underwater effects were also nicely done. The movement of the Atlantean characters and an underwater voice filter were nice touches.

Now on to the things I didn’t like… A big problem for me was Aquaman’s pacing- the movie was too long. At almost two and a half hours, it could have done with some editing, especially in one of the fight scenes. I thought that Black Manta’s character was mostly unnecessary. I loved basically everything about him, Yahya Abdul-Mateen was amazing, but this movie only needed one antagonist and suffered by trying to fit in both. This movie also falls into that “show all the cool bits in the trailer” category. Two of the most visually stunning shots in the movie were prominent in the trailers. It would have been great to have left those as surprises for the theater. I also had the pleasure of seeing this movie with my brother, home from the Army for the holidays. Immediately after leaving the theater he started rambling about the film’s weapons and technical issues (he always does that), such as shooting off grenade launchers in a room full of torpedoes on a submerged submarine. But even with those implausible things or bad decisions, he still enjoyed the movie. I also noticed quite a few references to The Little Mermaid. Not necessarily a negative, just something I observed. I’m not sure if that was intentional, accidental, or just because I watched that movie a million times as a kid and it’s permanently embedded in my brain. It doesn’t help that Cyborg actually calls Aquaman “Little Mermaid” in Justice League. Even with its faults, this movie is definitely one of the best DC has put out in a while, save for maybe Wonder Woman. It’s good to be able to publicly declare I enjoyed a movie made by DC again without fear of ridicule.

Aquaman is the fun action-packed, adventure movie we’ve sorely been needing from the DCEU. I’m happy with how they developed the character and hope to see more of him. I highly recommend you see this on the big screen.

Hear our podcast review on an up coming Extra Film episode!