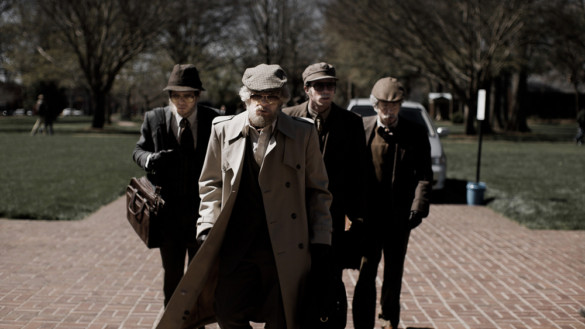 Synopsis: Four young men mistake their lives for a movie and attempt one of the most audacious heists in U.S. history.

Wild. Absolutely wild. American Animals is an unyielding, unabashed thrill ride that mixes documentary, psychological thriller and heist tropes into one seamless experience. BAFTA winning writer-directer Bart Layton has echoed his brilliant skills as a documentarian (The Imposter was easily one of the best docs of 2012, I don’t care what The Academy says) in ways that are incisively clever, but simultaneously he creates a dramatically tense heist film that somehow makes the experience as insightful as it is visceral.

American Animals centers on Spencer Reinhard and Warren Lipka, two college students in Lexington, Kentucky who become trapped by the mundane rhythms of life, and are looking for some sort of spark. Reinhard, who attends the liberal arts college Transylvania University, gets an idea to steal the very rare, but very authentic, book of paintings by John James Audobon called Birds of America, which is located in Transylvania’s Special Collections Libarary. Warren bites on the idea and together they spend months planning the heist. Along the way they realize they need more help and reel in Warren’s friends Eric Borsuk and Chas Allen. The four of them end up creating the most inept heist of all-time, arguably.

The nucleus of American Animals is rooted in Layton’s direction, editing style and ability to harmoniously transition between documentary-style interviews and the film’s dramatic re-telling of these events. And to be clear, this isn’t “based on a true story” as the opening titles will tell you, it *is* a true story. Ironically though, while the real-life Reinhard, Lipka, Borsuk and Allen offer up credence to the authenticity of this being true, Layton intentionally re-creates these events through juxtaposing perspectives, thus questioning what’s real and what isn’t. This actually did happen, but how did it happen? We don’t really know, and the contradicting viewpoints of these characters hazily render the “truth” as something more individual. Perhaps sometimes what we perceive as true is just a manipulation, a notion that is becomes poignant in how Layton reflects on those questions.

Those thematic layers are thought-provoking, but they’re also fun to watch. Layton’s editing approach gives American Animals an energy that compliments the meta humor that sprouts as a result of interweaving the real-life people with their fictional characters. The first act often showcases the fictional versions of Reinhard and Lipka reacting promptly to what is being said in the documentary-style interviews. At times they look into the camera to comment on the lunacy of what’s going on. We also see several scenes play out in two different ways because of the aforementioned varying perspectives. Layton isn’t necessarily inventing a new wheel, as we’ve seen this style before, but it’s the extremes Layton goes to that makes American Animals invigorating.

Many meta films will directly comment on the “true” stories they are telling, such as The Big Short and the Wolf of Wall Street recently, but American Animals is literally half a documentary. It’s half a dramatic re-telling. And often times those two worlds collide. It’s also insane because part of third act shifts from heist film to a psychological character study. In theory, Layton’s approach should not work. And maybe it won’t work for some audiences. But Layton’s grasp on the material, and his strengths as a filmmaker, keep the experience singular. Everything has its place. The meta commentary, the heist itself, the human interactions that drive much of the story, the question of why they did this, it all comes together in a way that’s rare.

Of course, Layton isn’t the only star of the film. Portraying these characters are Evan Peters (Lipka), Barry Keoghan (Reinhard), Blake Jenner (Allen) and Jared Abrahamson (Borsuk) respectively, and they’re all very good. Keoghan gives a riveting introspective performance. Peters is more loud, but in a way that is necessary. Abrahamson gives a somewhat devastating performance in the emotion he aims for, and there are a few moments that are very striking as a result. Jenner isn’t asked to do much, but he arguably has the most nuanced scene of the whole film where he gets cathartic toward the other individuals. In fact, it could be the best moment of acting in Jenner’s young career so far.

American Animals is one of the most unique experiences of 2018 so far. Perhaps its editing and tonal shifts will be too cumbersome for some audiences, but for me, there’s a lot of profound layers to Layton’s direction that allows this story to be much more than just another movie about something that actually happened in real life.