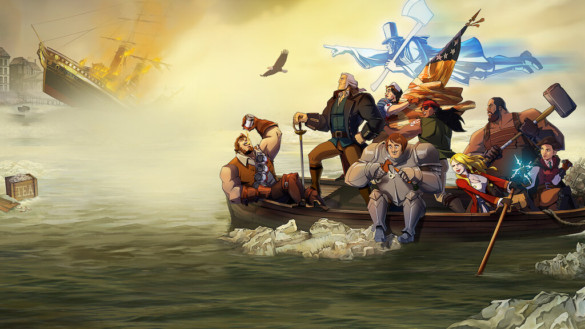 There was no reason for America: The Motion Picture to disappoint. Teaming up Lord/Miller with Floyd Country Productions, the company behind FX’s Archer, was a stroke of genius. Phil Lord and Christopher Miller have always excelled at meta-comedy. The films they’ve produced and directed in this subgenre are always a thrill to watch (The Mitchells vs. The Machines, which came out in April, is still the best animated film of the year). And with a stacked cast of Channing Tatum, Olivia Munn, and Andy Samberg to boot, the talent is there to make the material at least somewhat palpable. Yet, nothing clicked. It desperately wants to be a ‘Murica F– Yeah parody of how the United States was founded, yet none of it is funny, entertaining, or particularly memorable.

In an alternate timeline where civilians are aware of current pop-culture trends inside a period piece setting, Abraham Lincoln (Will Forte) gets killed by Benedict Arnold (Samberg), who has sided with the British and plans to topple what Lincoln has called “America.” Grief-stricken by the death of his friend, George Washington (Tatum) hatches a plan to team up with the most brilliant minds and fighters of the colonies for it to be freed from tyrannical British rule. Coincidentally, Washington and his team members, Samuel Adams (Jason Mantzoukas), Thomas Edison (Munn), Paul Revere (Moynihan), Geronimo (Raoul Trujillo), and John Henry (Killer Mike) will also found America, “the land of the free and home of the brave,” in the process. Unfortunately, though, things will become a lot more complicated than it seems.

The film’s only funny joke happens near the end after America is founded on July 4th, 1776. The civilians list the plethora of problems America will have in history regarding gun violence, racial inequality, and equal rights. George Washington looks at the camera, in exasperation, and says, “Oh, God, we’re going to f– this up, aren’t we?” It’s funny, in part because we all know that the United States prides itself to be “the greatest country in the world,” yet is a country rooted in endless problems. To name a few; colonialism, Indigenous reconciliation, systemic racism, and conservative politicians incapable of realizing that society, as a whole, has become more progressive and want to backtrack decades of advancement that gave everyone, no matter their sexual orientation and ethnicity, equal opportunities and rights. The rest of the film is filled with mean-spirited jokes, whether extremely racist or misogynist, that aren’t funny, even if it points out America’s innumerable problems through them. It still doesn’t make them any less offensive and terribly uncomfortable to watch.

If the film doesn’t make you uncomfortable, you’ll likely cringe in horribly dated pop-culture references that have been done way too many times in better parodies. For example, the British are painted as the Empire, with Simon Pegg’s King James blatantly imitating James Earl Jones’ menacing tone as Darth Vader, with British soldiers as useless as Stormtroopers (as if that wasn’t obvious enough, Abraham Lincoln eventually shows up as a Force Ghost). More obsolete meta-jokes, such as Benedict Arnold’s carriage transporter literally being Jason Statham’s Frank Martin (AKA The Transporter), or references to Blue Man Group, Netflix, selfies, Fast & Furious, Robocop, and more, try to infuse some laughs to the ones that understand the film’s innumerable references. Still, even the ones that do might find it tiresome and uninspired.

It also doesn’t help that the movie’s animation is extremely lifeless, as it tries to mix the grandeur of a Ralph Bakshi production with the monotonous movement of Archer. Scenes that should look epic in scale, such as the big final battle, are horribly rendered with a rough frame rate that showcases the cheapness of the animation. The trailer showcased a polished 2D-animated adult film that would not only look grandiose in scope but would fully bathe in its ‘Murica F–Yeah premise. It desperately tries to replace the United States’ traditional national anthem with Lynyrd Skynyrd’s Free Bird. Still, even with smart musical cues like this one, everything about the movie feels terribly distant. We’re neither engaged in the jokes nor the animation, so it feels tough to care about the film’s revisionist telling of how the United States was founded.

The actors do, however, give credible vocal performances. I especially enjoyed Andy Samberg as Benedict Arnold, who seemed to be the actor that had the most fun with his character. Olivia Munn is also excellent here as Thomas Edison, who strives by “science” to defeat the British. I’ll admit that using beer as America’s staple drink, which is the opposite of tea, led me to a chuckle or two, but it certainly wasn’t enough for me to get invested in America: The Motion Picture.

It’s a film that desperately tries to make us laugh but fails miserably with horribly dated pop culture and meta-references, soulless animation, and many offensive stereotypes to boot. If you want a perfectly raunchy adult animated comedy that isn’t afraid of being terribly offensive but also unabashedly hilarious, there’s only one film to watch this weekend: Team America: World Police. Now that’s a movie.