Movie Review: ‘All Quiet on the Western Front’ is a Phenomenal, Oscar-Worthy War Epic 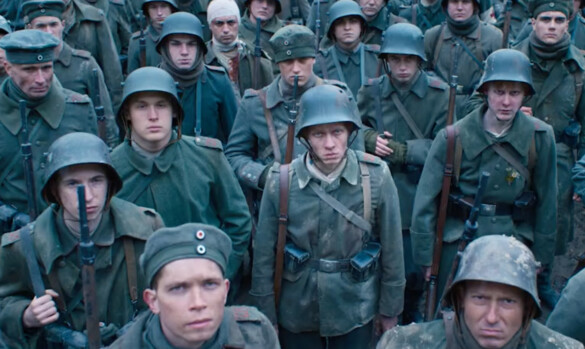 Movie Review: ‘All Quiet on the Western Front’ is a Phenomenal, Oscar-Worthy War Epic

Synopsis: A young German soldier’s terrifying experiences and distress on the western front during World War I.

The late Jean-Luc Godard once said, “The way to criticize a movie is to make another movie,” and three years after Sam Mendes’ Oscar-winning 1917 comes a new adaptation of Erich Maria Remarque’s 1928 German novel All Quiet on the Western Front. One flaw in this scenario is that 1917 gave critics and audiences little to criticize—the gorgeously-realized drama about World War I was beautifully acted and flawlessly directed, the movie playing out as if it were filmed (mostly) in one shot. It was thrilling and majestic, it brought tears to my eyes, and it made my top ten list of 2019. So is there room already for another WWI film?

When it’s done this well, the answer is a resounding yes. All Quiet on the Western Front, now available on Netflix, doesn’t have the so-called gimmick of 1917’s long unbroken shot, but it features a haunting new vision of the horrors of war, with battle scenes so visceral and shocking it’s hard not to look away. The famously terrifying opening of Steven Spielberg’s Saving Private Ryan has been overtaken in this film with not only one but three major sequences that are meticulously crafted to show every last brutal kill on the battlefield.

But All Quiet on the Western Front is so much more than realistic depictions of harrowing war scenes. It’s also an enormously effective human story of survival told through a single point-of-view character we come to root for and care about. Felix Kammerer gives an astonishing performance as Paul Baumer, a 17-year-old who enlists in the Imperial German Army with his friends Albert, Franz, and Ludwig. Their romantic view of war is quickly shattered when they come face to face with the harsh realities of battle and death. Paul struggles to survive as he sees many of his friends killed before his eyes, and as the months pass, he must carry on fighting even when at times he’s lost all sense of hope.

The novel All Quiet on the Western has been adapted well twice before, first in the acclaimed 1930 Universal Pictures version that won the Best Picture Academy Award, and second in the powerful 1979 TV movie, which was nominated for seven Emmys, including Outstanding Drama Special. A fascinating experiment would be to watch all three versions in short succession because all were made decades apart from each other, and all are great for different reasons. Obviously, the 1930 original doesn’t have the bigger budget or technical prowess of the more recent adaptation, but what it lacks in grandeur it makes up for with emotional stakes and human connection. The 1979 version similarly only reaches a medium level of craftsmanship, but features excellent performances and painful scenes of harsh reality.

The 2022 adaptation is the most visceral for sure, director Edward Berger offering an unflinching depiction of chaotic grisly battle scenes that last for minutes on end. And what he does so well is immerse us into the realistic action while always making us care about the characters, especially Paul. We watch him come to terms with the mission, attacking and killing soldiers to survive the day. These moments show gruesome deaths in chilling detail, many men being killed in long handheld unbroken shots. Berger demands we watch every heartbreaking moment of horror as if we’re standing right next to Paul.

What makes the film especially memorable are its quiet scenes of both humor and terror. Non-stop battle action for the whole film would be too much, so Berger and the other writers wisely provide moments of levity, some early scenes of Paul and his friends sharing stories as well as some laughs. The film’s most memorable scene comes when Paul, exhausted, scared, his face caked in mud, stabs a soldier in the chest and then watches him slowly die. After a minute, Paul decides to save the man, and he gives him some water to drink, only to watch the life drain from the man’s eyes. It’s one of the year’s most haunting, emotionally devastating moments, Paul’s humanity coming through in a place and time that didn’t call for it.

The most ambitious and innovative war film in recent years remains 1917, which rightfully earned ten Oscar nominations and featured one of the most effective cinematic gimmicks in recent memory, but All Quiet on the Western Front is a similarly powerful drama worthy of Oscar attention in multiple categories next year, particularly Best Cinematography, Best Actor for Felix Kammerer, and Best Picture. Don’t let its two-and-a-half hour running time scare you away. Although it explores some familiar territory we’ve seen in other war films, its incredible craftsmanship and rock-solid performances, as well as a moving ending, make this one of the finest films of 2022.