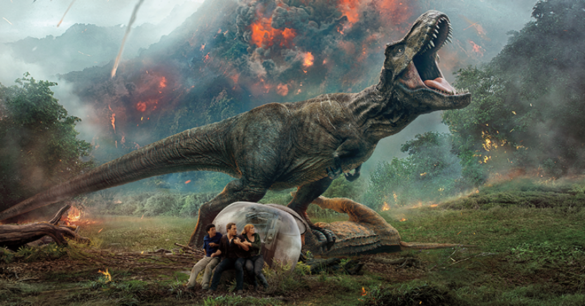 Synopsis: When the island’s dormant volcano begins roaring to life, Owen and Claire mount a campaign to rescue the remaining dinosaurs from this extinction-level event.

Aaaaand the dinos need to be corralled again. Five times this has happened already, so maybe we ought to really let extinct animals lie? Seriously, that might be a sign from upstairs.

To ensure people will see, hear or register said sign in some form, the hulking volcano that crowns Isla Nublar is reactivated; all that’s green, moving and connected to Jurassic World is set to go kaput by kaboom. Although sort-of demoted from DinoLand supervisor to that of if-PETA-has-a-dino-department, Claire Dearing (Bryce Dallas Howard) is still looking out for the beasts, awaiting for a party with the means to carry out a rescue mission to contact her. And lo, what luck: Right after the heated (pun intended) news break, Richard Hammond’s equally moneyed best friend, Benjamin Lockwood (James Cromwell), summons Claire to his palace/museum, where he then reveals a plan to extract the dinosaurs and ship them to a visitor-free sanctuary.  “These creatures don’t need our protection, they need our absence,” he said, with much passion, much effort (he’s dying) and much unawareness of parasailers.

That was it for convincing character beats in Fallen Kingdom, but in comparison with its immediate predecessor there’s at least one to find. Or half, as Cromwell can’t hold his British accent, though more is more. Savor it while it’s here, perhaps? Soon enough the script from Derek Connolly and Colin Trevorrow, holdovers from Jurassic World, will go back to zealously favoring reanimated fossils and the mayhem they muster over bipeds and any of their schemes. The romance between Claire and raptor behaviorist Owen Grady (Chris Pratt) remains prickly to the touch despite the performers’ charisma; there is still no play to lessen the awkwardness of Dr. Henry Wu (BD Wong)’s stepping to the bad side; what tact the commentaries on how corporate ideals pollute dreams and gender disparity used to have (one character chides another as a “nasty woman”) is now wholly dismissed; and the understanding of “relief” designed for the comics — feisty vet Zia (Daniella Pineda) and lily-livered techie Franklin (Justice Smith) — is to grate or to lift straight from Caricature Academy. The park is gone and with it Connolly and Trevorrow’s need to make the human factor matter. It’s all dino now.

Or it’s all Blue now. Owen’s favorite member of the raptor squad is, in the eyes of Wong and new-yet-unremarkable villains, Lockwood’s estate manager Evan Mills (Rafe Spall) and dino shopper Gunnar Eversol (Toby Jones), a must-capture. You know, for medicine, pets (!) and combat-dino purposes. With the debut of baby version of Blue in the film (seen through videos), at this point the nodding velociraptor has had a more developed character arc than any human being in the Jurassic World series.

“Um, so what? I paid for the dinos,” some will say. Maybe a few will throw in expletives. Maybe a death threat. Either way, don’t vent too much or you’ll be blind to the return of every penny, a transaction made possible thanks to director J.A. Bayona’s visual sense. Trevorrow’s handling of Jurassic World’s set pieces is fun — especially of those not too keen on homaging — but with more time behind the camera Bayona offers that and more-than-often mesmerizing flair. As an improvement, Bayona and d.p. Oscar Faura don’t just rely on a particular-saur’s scale to evoke amazement, they also tinker with light sources, angles and movement. Take the scene where Claire and Franklin spot a dinosaur in the tunnel with each drop of lava, or the opening where one lightning flash equals one sighting of a T. rex and, better yet, the mosasaur. Yes, it’s over-advertised (and doesn’t make much sense in retrospect), but the cat-and-mouse game between “Boogeyman Raptor” and Lockwood’s niece Maisie (Isabella Sermon, debut) will still unnerve as Bayona regards the creature as a freaking ghost.

Even the scenes with lighter-to-no peril are standouts, such as a drowning-gyrosphere rescue that is carried out in one take, a surprising top-down shot that frames a trophy hunter (Ted Levine, brasher version of Pete Postlethwaite’s Roland Tembo) and a dino as bacteria on a Petri dish, and an operatic Dino-centric Sotheby’s. Fallen Kingdom reintroduces a spice thought to have been placed in cryo after the 1993 film — fear — and that, my dear friends, can be an alluring-enough diversion from all the flaws, mainly and predictably, of the man-made variety.

Buoyed by the Bayona, this film is, and so it would be beyond-smart to have him again when (or if) this planet does go to the dinos. Can the humans be more than a haze when the end of their lives cometh, then? Or is it going to be “Blue or Bust,” or “Dino or Die Trying,” from here on out?

Hear our podcast review on Episode 279!