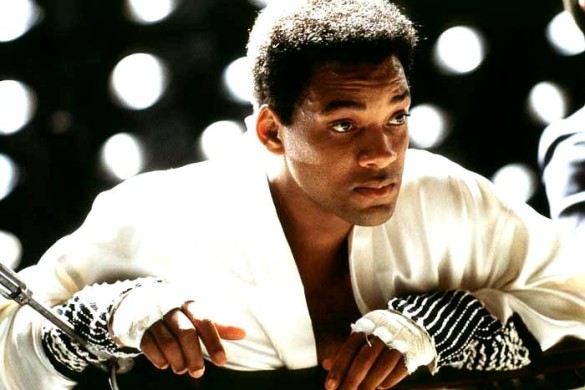 Synopsis: A biography of sports legend, Muhammad Ali, from his early days to his days in the ring.

DIRECTION
Michael Mann does a good job of portraying Muhammad Ali but the movie as a whole lacks the energy and pace that should come with the lifestyle of Ali. Ali was high-energy all the time and was a fast-paced character but the film is anything but that and needed to embrace that energy and pace. However, Mann does a fantastic job of directing Will Smith and getting the portrayal and performance needed to bring this character to life. The cinematography however was really good, especially when we are in the ring. There is little score and all the boxing puts you into the shoes and gloves of Ali which was pretty engaging. On a side note, when the score was used, it made the scenes a little over dramatic when they really didn’t need to be. The tone (overall, not just the score) should of been more upbeat and full where we didn’t get that. The camera at times was shaky, but it’s appropriate given the sport that we’re exposed to here. The camera work overall was good though and it captured the aesthetic really well. Mann’s film is a little long and messy at times but overall the aesthetic and characters override some of the dullness this movie has. It’s easy to feel the era that were in and it’s fun meeting some of these famous boxers that is considered boxing’s heyday.

SCRIPT
Doing biography movies are very difficult because you are trying to tell a person’s story in 2 hours (or more) which is pretty hard to do. Biopics need to be condensed and focused strongly in order to work and in Ali, it’s easily the part that brings this film down. The movie is focused on Ali’s life from when he won the Heavyweight Championship the first time up until he won it the second time which was about 10 years or so. In that time, the script focus’s on Ali’s religion life, his female companionship life and of course, his boxing life. Each one of those areas could be a movie on it’s own thus making the script a little messy and even un-interesting at times, especially if you know the story. When outside of the ring, it’s slow pace can be distracting but we get to know the man more which is what we are looking for here. Specifically with Ali’s relationship with Howard Cosell was done extremely well and gave us something we may or may not have known about Ali. Speaking of, Ali was written really well (and performed even better) and it’s what made the movie really engaging. The one-liners Ali was known for was hysterical and interesting and it’s what we should expect from this character. Should this script have been more tightened and focused, given the performance by Will Smith, this had potential to be one of the best biopics of all-time.

PERFORMANCES
The performances are through the roof in this film. Smith, who was nominated for an Oscar, was extremely incredible as Ali and brought a lot of energy and flash to this character, where the rest of the film couldn’t keep up. The one-liners and cocky attitude we all know, and perhaps adore, was hysterical and spot on. It’s 1000% believable and for a moment we forget who the actor even is. Voight is just as amazing as Howard Cosell, who had the voice down pat, and along with the makeup brought Cosell to life. The banter between Voight and Smith was great and you could feel the chemistry. Jamie Foxx and the rest of the cast was also very good and brought something to the table. It was also fun seeing other characters with screen time such as Malcolm X, Sonny Liston, ‘Smokin’ Joe Frazier and others from that era as well. The performances from those characters won’t be stand out, but still fun to see.

SCORE
Pieter Bourke and Lisa Gerrard teamed up to do the score here which is pretty good overall. Gerrard is pretty well known for bringing good drama into her score, see The Gladiator, and you can hear it here as well. The score is a little somber and slow-paced for the most part, but again, given the direction here, it’s appropriate. We get a heavy score toward the end of the boxing sequences which makes the scene more dramatic than what it is, but the music is good and easy to listen to. It just would of worked better if the tone of the film overall was different.