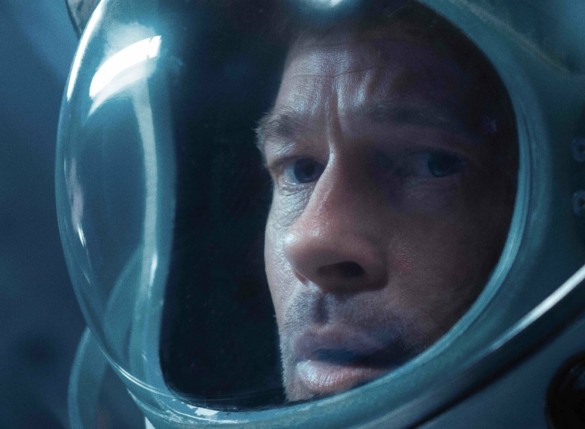 Synopsis: Astronaut Roy McBride undertakes a mission across an unforgiving solar system to uncover the truth about his missing father and his doomed expedition that now, 30 years later, threatens the universe.

In one stroke, James Gray checked two boxes: The space film that is the reverse of Interstellar and should have been the one to receive controversy instead of First Man.

The first point is clear from the majority of Ad Astra’s promos, which gives the final frontier either the least screen time or places it from nearly, to actually outside, of the printed margin. Appropriate, seeing as the subject being explored in the film is the human — Major Roy McBride (Brad Pitt) — or, to be even more specific, said human’s headspace. Through plenty of narration, we find out that Roy is an astrum of an astronaut, the son of the famed Clifford McBride (Tommy Lee Jones, seemingly securing his supporting Oscar) and the perfect man in U.S. Space Command’s eyes to retrieve him from the edges of the solar system. Why the latter? Thousands on Earth have died after a power surge reportedly stemming from the “Lima Project,” the extraterrestrial-searching venture of which McBride Sr. is the leader.

Gray and Ethan Gross’ script may have placed the film in an advanced, beautiful and, most importantly, hopeful future — International Space Antenna! Commercial deep-space flights! Applebee’s on the moon! Pirates on rovers! — but the central interest is in building the character more than the world, making clear the dives into one man’s heart and sprinkling the background with humankind’s thus-far steps all over the starry expanse. Pitt is certainly up to the task for this approach, using his eyes and head turns to audibly highlight the reactions to revelations. A standout would be when Roy gets summoned by the higher-ups of SpaceCom and hears how his father is responsible for the devastation: All the limited physical movements Pitt employs are just right and enough to deliver this observation home, as well as crisply reflecting Roy’s spiritual tug-of-war between the man on a mission and the man buried by all the missions. Often repeated is how calm Roy is in any situation, which is nice when you’re, say, freefalling from stratospheric heights (an opener vertiginously photographed by Interstellar’s d.p. Hoyte van Hoytema), but is calmness appropriate when he is about to face the familial star he deems an enigma, his superiors have made mythic and yet reportedly the scourge? Will whatever shell Roy has built be punctured the closer he reaches his goal? These questions orbit the mind, and never cease to, throughout Ad Astra, guaranteeing visibility to the human costs of the voyage. The brothers Nolan’s work on Interstellar, despite that same focus, often falls victim to the spectacle and spectacular theories.

As for the other half of the opening sentence, look to the flag that Ad Astra waves. After every stage of the journey, methodically plotted out by the script in the form of each subsequent planet Roy rockets toward, there will be a moment — and accompanying monologue — that shows the realization of limits, the cause to pursue answers rather than mysteries. There is, arguably, merit in the thought that the world in the film has evolved to the point where any further search for an answer will be hollow conquests, magnets for despair and the destroying of what has always mattered. This, too, is one of the conclusions derivable from Gray’s previous intimate epic, The Lost City of Z, which also commits the sin of underusing its actresses (but Ruth Negga’s arrival with the waves is a neat visual trick). It’s kind of daring to communicate the need to be undaring in a time when victories are said to only be recognizable if they are by the truckload, or when traits that are outright remnants get rendered as timely essentials. In the film’s father-son context, this reads as a push against the olden order. Where are the headlines for that, although looking at reality the act seems justified?

But even without flashes of First Man or Interstellar, Ad Astra would still have plenty of anchorage. Under the guise of a sizeable picture is a resonating meditation, a futuristic symphony with a most-relevant note that the known has what the unknown teases. Don’t let anyone tell you differently, but this is the companion piece to Jack Fawcett’s cinematic expedition.

Hear our podcast review on Episode 344: