Movie Review: ‘A Wrinkle in Time’ tessers between magnificence and misfires 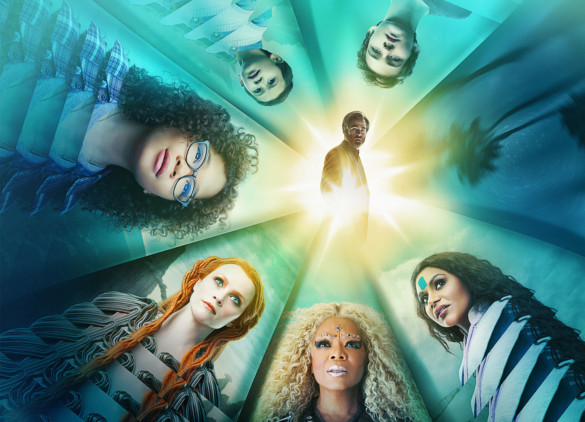 Synopsis: After the disappearance of her scientist father, three peculiar beings send Meg, her brother, and her friend to space in order to find him.

“Sweet dreams aren’t made of this, and it’s tough to get up and flee.” Not Eurythmics, USA.

Such is the reality of Meg (Storm Reid), a teen who has shut off her science-loving, open-minded self when the disappearance of her father, NASA physicist Alex (Chris Pine), made her a target for bullies and indifferent adults. For the longest time, she thinks he’s abandoned her when in fact, after interacting with the tesseract aka wrinkled time that grants access to worlds beyond, a dark force called The It has entrapped him. And just when Meg gets told by many in the same day that letting go will do her good, she receives news about Alex, alive, well and in need of a way back. As the saying goes for any adventure, “it’s dangerous to go alone,” rallying behind Meg are her prodigious brother Charles Wallace (Deric McCabe), blue-eyed classmate Calvin (Levi Miller) plus three cosmic peacekeepers—sprightly Mrs. Whatsit (Reese Witherspoon), walking encyclopedia Mrs. Who (Mindy Kaling) and poise incarnate Mrs. Which (Oprah Winfrey).

Meg’s pre-rescuer reality is also the viewer’s, an interesting attribute for a film about crossing dimensions and also an aching point to bring up. While A Wrinkle in Time is commendable for rendering itself as a sincere, passionate, all-the-way-’til-Sunday broadcast of life’s virtues— optimism, determination and, especially, generosity—the message is so wonkily assembled it does little to exorcise dark seeds—frustration, confusion, and questions. You would think director Ava DuVernay will nail the visualization of Madeleine L’Engle’s prose since, cerebrality aside, the source material provides more space than Selma for her to provoke hearts and demands more focus than 13th to properly cover the subject matter. Thing is, the filmmaker does both—attempts are visible—but it’s constantly obscured when Spencer Averick’s editing is inspired by VMA 2009 Kanye. The constant hopping, even in the least chaotic of moments, and evident truncating diminish DuVernay’s efforts to patch the spottier acting, allay the novel’s density, and flaunt an improved visual sense. Since time moves jaggedly rather than flowy here, watching the film mirrors to reading a book with parts of it dispersed all over the galaxy, waiting for someone to tesser to where they are. But after a couple of sections are gathered, disappointment remains as they don’t seem to connect, or at least give the illusion of connection. Channel the inner child, the director asks before the screening; that happened, and one can’t help but keep maturing when flow is drained and the writing grows clunkier.

It’s tiring and heart-bruising to see A Wrinkle in Time unable to impress in a manner that matches its intention— clearly and smoothly communicate a tribute to empowerment that, when heard, will reaffirm. It may even cure, if current times are considered. But credit where it’s due, and the film promises to excite anyone who loves music, fashion, hairdo, and makeup— no matter the level. Sure, Reid’s quiet confidence and her performance as the thematic surrogate delight, enough to compensate the weightlessness of her co-star Miller (and what is he doing here? And Michael Peña and Zach G, too?), but she and the emotions become auxiliary to the vivifying and Sadé-featured soundtrack, Paco Delgado’s intricate dresses (particularly those for Mrs. Who), lavish follicle designs from Kim Kimble, and beautifying techniques courtesy of LaLette Littlejohn. Time, thanks to its invisibility, enables those tasked with depicting it to add as much color, in all senses of the word, to their hearts’ content, so why not go all out? Glad that it did when it could.

That said, it’s unfortunate, and upsetting, when right now A Wrinkle in Time resembles a more-attuned music radio station or an enlarged Pinterest for costume and hairstyling inspirations rather than this fantasy-set (yet crucial) chicken soup for the soul. There’s no dismissing the ambition of DuVernay and company, but tessering is required to be where a better version of the film is screening. Paging Dr. Who.